What makes a stud legal?

As a regular ref I am increasingly seeing in the youth game (and to a lessor extent senior game) with players arriving for games in studs that are not legal and/or safe to play in.

As a ref, I hate it – My choice being to enforce the (entirely reasonable) letter of the law and not permit the player to take place in a game, or overlook it – and potentially take a degree of personal liability for permitting a player to take to the field in studs I know to be illegal (under Law 4).

The purpose of this blog – is to help parents (& players) make an informed decision and purchase legal rugby boots.

The RFU has published guidance on studs as part of their FAQ on player welfare, which states “Blades and studs are currently both acceptable as footwear for rugby (as long as they comply with the IRB regulations below). There is not currently a kite mark for rugby boots; manufacturers self certify their studs or blades against regulation 12 to check that they cause no more damage than traditional studs.”

Since I originally wrote this blog, the RFU have published their own guidance on rugby boots (I like to believe the RFU’s author read this blog, as the working is just too similar to be by chance) https://keepyourbootson.co.uk/wp-content/uploads/2019/05/Boots-Studes-Blades-RugbySafe-Essential-Guide-2019.pdf

In general if you are purchasing a boot advertised as a rugby boot from a reputable manufacturer/outlet you are probably OK. If it is advertised as a football boot – more checks are required. The final responsibility is with the players to ensure that they play in safe boots.

4.1. All items of clothing must comply with World Rugby Regulation 12.

4.3(j). Additional items are permitted. These are: Studs, including those of moulded rubber, on the soles of their boots.

g. Any item that is normally permitted in law but, in the referee’s opinion, is liable to cause injury.

6.4 The match officials must inspect the players’ clothing and studs for conformity to Law 4. 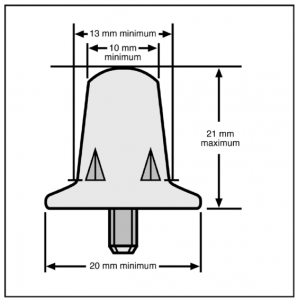 The key requirements are: 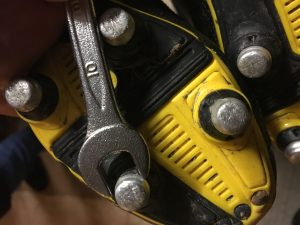 Note: There is no allowance for any differences based on age or boot-size. This photo is of my 5-year old’s (size 13) boot, demonstrating that even tiny boots can fit a legal stud  (and yes – I  have stolen the idea from someone on rugbyrefs.com and added a 10mm spanner to my kit bag).

The standard effectively is that…

Clearly this requirement is much vaguer – and at pitch-side is a judgement call.  I run my hands over the boots and see if feels sharper less/comfortable then a conventional stud (although by the time I have run my hands over a whole teams boots – they all feel pretty uncomfortable).

Disclaimer – This list was compiled based on the images presented and is intended to be illustrative – it is not a definitive ‘approval’ of a particular boot type, or a recommendation or endorsement of any product.  In many cases studs can be replaced so an illegal boot could be made legal through stud replacements and visa-versa.  It is still your responsibility to confirm your studs/boots are legal…

It is thankless duty of the ref. to interpret this (somewhat vague) guidance on the day. I also fully reserve my right to deem a boot at legal/illegal on the day based on the boot’s actual characteristics. You can also expect a degree of variance in interpretation between refs.

These are far more subjective – and each referee is likely to base their judgement on the ‘feel’ of each individual boot. My advice would be to go with conical moulded studs or specifically search for boots marketed as rugby boots.