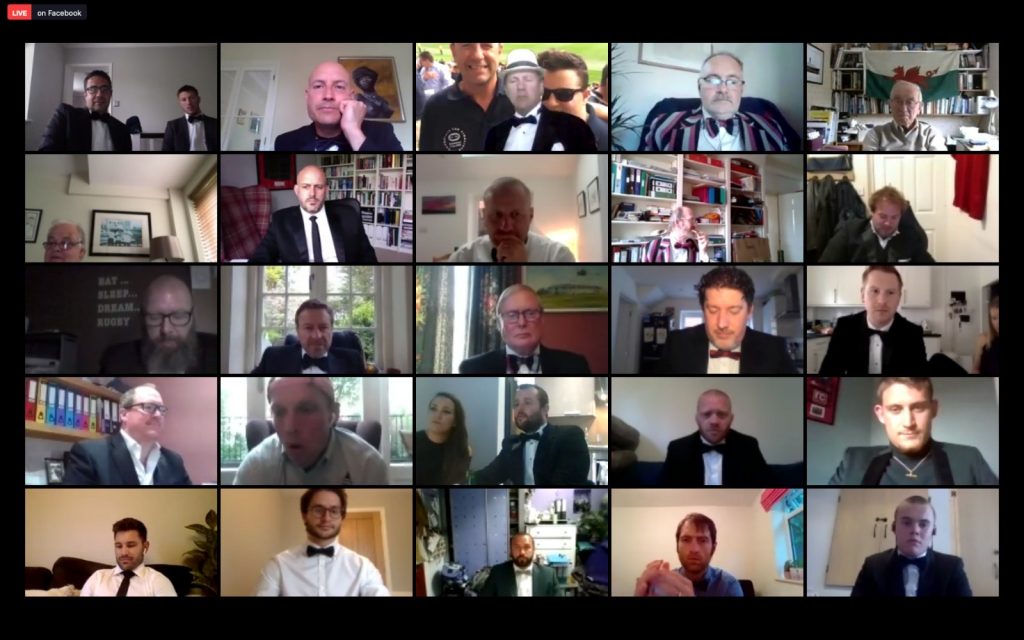 The Club has held it’s Academy and Senior Awards over the past two successive Fridays, to formally draw the 2019/20 season to a close. With the Covid-19 lock-down curtailing the season back in March we have all had to get used to changes in the way we live our life and the onset of a “new normal”.

One of the ‘positive’ developments which has ensued has been the way we have started to use evolving technology to maintain a semblance of business as usual and, hence, the awards were held over Zoom, with over 30 attendees at the Academy event on 15th May. We then had approaching 80 players, coaches, officials and supporters wearing Black Tie in the Zoom room last Friday (22nd), plus many others following the evening on Facebook. The generations were spanned with the likes of John Evans at one end of the spectrum and young Ollie Rigby learning the tricks of the trade from his father, Club Chairman Mike Rigby, at the other.

After overcoming some initial difficulties, the Academy squad went on to attain a 100% record. Played 7 won 7, scoring 219 points and conceding just 34. Sadly, their two biggest matches were cancelled with TJs withdrawing from their scheduled match on “strength” grounds (and not because they

were too strong..wink wink!) and then Coronavirus claiming the much anticipated Kent Plate Final against Canterbury. The lads should be very proud of their campaign, though, and the future of the club looks rosy.

The individual award winners were:-

“Did I really say that?”: Will Hawksfield

The irrepressible Tim McCabe was our compere for the evening, with Mac GD acting as Floor (Zoom) Manager and Director…..

We first raised a glass to absent friends to mark those who have passed away over the last 12 months – John Exall was a President 1973-86 and 1st team Captain 1950-52. He was a Life Vice President and had dedicated his life to the Club; David Barnard who died earlier this month after a short illness was a club VP. He was 1st team Captain in the 1958-59 season and lived in Sheffield. He and his wife always tried to attend the Spa lunch at the end of the season Gordon Thornby was a fixture in the Club in the 50s and 60s and will have been known to many people. Bob Wykes was the Junior Co-ordinator in the early 90s and contributed to the ongoing success of the Junior section. He died earlier this month at the age of 87. And, of course, we lost Steve “Angry” Anderson who has been at the heartbeat of the club for so many years. A true “club” man. Gone but not forgotten.

We were then joined by the first of a number of “guests” who offered light relief and support via a series of pre-recorded messages. World Cup Final referee Nigel Owens recalled his attendance at the 2014 awards and he was later followed by Andy Goode (2015 guest of honour), Rob & Alex Lozowski, Jason Leonard and Martin Corry.

Chairman Mike Rigby then welcomed the assembled throng before providing an update on the season just gone – both on and off the pitch. He highlighted our excellent 6th place in the league, the two drawn ‘derby’ games against Sevenoaks when the teams “could literally not be separated” and the progress made on the 3G pitch and club plans. His stand-out performance though was the Academy and their undefeated season.

Youth Clubman of the Year

Junior Chairman Laurence Taylor expressed his pride in a youth section that has over 600 playing members, despite an incredibly tough season which saw 5 months of weather disruptions before Covid-19 halted all playing….and just as the weather was perking up too! That over 20% of these players are in the Under 6s is a powerful testament to the continued attractiveness of rugby as a sport.

Laurence then announced Simon Hughes as the winner of this award. Not only is he the club’s Commercial Director at the forefront of the 3G pitch and new “Youth Shirt” projects, but he remains an “inspirational Head Coach of the Under 9s”.

Academy Player of the Year (Seniors)

Academy Backs Coach Max Douch announced this award which recognises the Academy player to make the biggest impression in his first season transitioning into senior Saturday rugby. The award went to a player who made his senior debut on his 17th birthday, playing alongside his very proud father, and scoring a try to boot! Harry Child is a very “exciting player to watch with ball in hand…..and is the future of the club”. He also continued to be a key part of the Academy squad.

Young Player of the Year

Mike Rigby announced this award and it went to Jake Smith. The flanker has made rapid progress in recent seasons, graduating from the Academy via impressive performances in the 2nd XV to make his First XV debut a few months ago. A highly-talented athlete and fierce competitor he will surely become a mainstay of the elite squad in the years to come.

Roger Clarke, club Life Vice-President and RFU Council Member for Kent, announced this annual award in memory of his son Anthony. It is awarded to a player who has made the full transition from mini rugby right through the club to the seniors so is, quite rightly, held as one of the evening’s most prestigious accolades.

This year’s winner is Harvey Colangelo. Not only has Harvey played in all the age groups through mini and juniors but he has also completed the “full house” of Academy, Fourth, Third and Second XV appearances ahead of making his First XV debut in the 2019/20 season. He has an “excellent attitude and temperament” and his strong performances in the 1st XV level bode well for a successful career ahead of him at this level.

Vets Player of the Year

Sadly, skipper Father Ed Tomlinson had very little on-pitch rugby to reflect on – played one won one – so instead this year’s award was made for “off” field activities.

Club members (and victims further afield!) will have to be living in a cave with no WI-FI to have not had the ‘joy’ of watching the Vets “Lockdown” videos and little embodies the spirit of #oneTWRFC more than these terrific efforts. Consequently, the creative geniuses behind the videos Tom “Tommo” Callaway and Tom Beynon are richly deserved joint winners.

Third XV Player of the Year

Andy Cunningham presented a season that saw some heavy “mis-matched” defeats but overall produced a record of played 12, won 6, lost 6. He was quite rightly proud of the fact that unlike many teams at this level in the county, Wells did not forfeit any games and also gave 53 players a run out during the campaign. This year’s winner is Nick Baldock, a true clubman who “encompasses the spirit of the 3s” and “played every position from prop to taking conversions to serving behind the bar!”.

Second XV Player of the Year

Head Coach Mav Anderson reflected on a tough campaign that saw just 4 wins from 14 matches played and a remarkable 68 players used……better player availability leading to greater continuity of selection has to be a goal for next season. Mav was, though, delighted that seven 2nd XV players made the step up to earn their first caps at 1s level and also commended the spirit of his squad and the attitude of players who dropped down to the 2s at various stages.

The likes of Connor Davis, Jack Palmer, Angus Horne and Jamie Piggins should be proud of their contributions but this season’s winner was a stand-out in the shape of Lucas Scully. Having made his First XV debut in the 2018/19 season he spent the bulk of this season in the 2nds where his ability to play so many positions was a god-send. Indeed, this might have counted against him when it came to possible elevation to the First XV but he “stayed focused on delivering for TWRFC and committed to training hard and learning”. His time in the 1s will surely come again before too long.

Head Coach Simon Whatling was able to report on another successful campaign and a 6th placed league finish. That this was achieved playing a brand of attacking and open rugby that has come to be seen as the “Tunbridge Wells way” should not be under-estimated.

This was awarded to flanker James Pancaldi. James arrived just a few weeks into the season but quickly established himself as a regular in the back row and 1st XV match day squad. He has a “great attitude, commitment and level of intensity…..the lad that never steps back!”.

Given the nature of Wells’ attacking back play this season it was unsurprising that this award would come down to a straight shoot-out between two prolific try-scoring backs. Max Hobbs has exhibited superb form all season and has quickly become a fan favourite but his tally of 12 tries left him just one short of another player who would sit firmly in the camp of one of the most popular players that the club has seen in recent times. Mike Doherty‘s 13 tries secured an un-paralleled third successive top try-scorer award. Mike trains harder than ever to maintain the fitness levels that makes him one of the most consistent performers in the squad and enables him to be “always in the right position to receive the ball to break the line”.

In what was undoubtedly one of the most popular wins of the night, Stuart Nicholls picked us this prestigious award as voted by his fellow players. Stu is a “clubman through and through” and off the pitch he organises the Socials for the Seniors. However, this should by no means detract that this true team player is now firmly ensconced as one of the first names down on the First XV team sheet. He “delivers for the squad week in week out with body on the line performances”.

1st XV Player of the Season

Si Whatling drew the playing awards to a close with the announcement that in the face of strong competition from Nicholls and skipper Ryan Taylor-Dennehy, the Player of the Season would be Frank Reynolds. The outside half continues to demonstrate his ” excellent knowledge of the game” and “is a consistent performer week in week out”. Whatling continued “Frank is a game changer who keeps the scoreboard ticking over and is a leader amongst a very capable squad of players”. There can be little higher an accolade than that.

Clubman of the Year

Mike Rigby made the final award of the evening. Despite strong competition from Stuart Montgomery, Michelle Greenall and Drew Raine, this year’s award went to the highly-deserving Nick Van Overstraeten.

Nick has taken on responsibility for club facilities and has delivered multiple improvement projects including the Internal Sound system, the External PA, a re-vamped gym/physio/changing rooms and, of course, the new club cafe. As well as always being a keen volunteer to assist with BBQs and socials, he has kept the club “legal” and has been “omnipresent around the club making sure it runs smoothly”.

The Chairman then thanked all involved in producing our Zoom awards before closing the evening with with a rallying call that once we are able to resume rugby again, the the Club “will move on stronger, with greater ambition and with a huge desire to progress”. Hear, Hear!