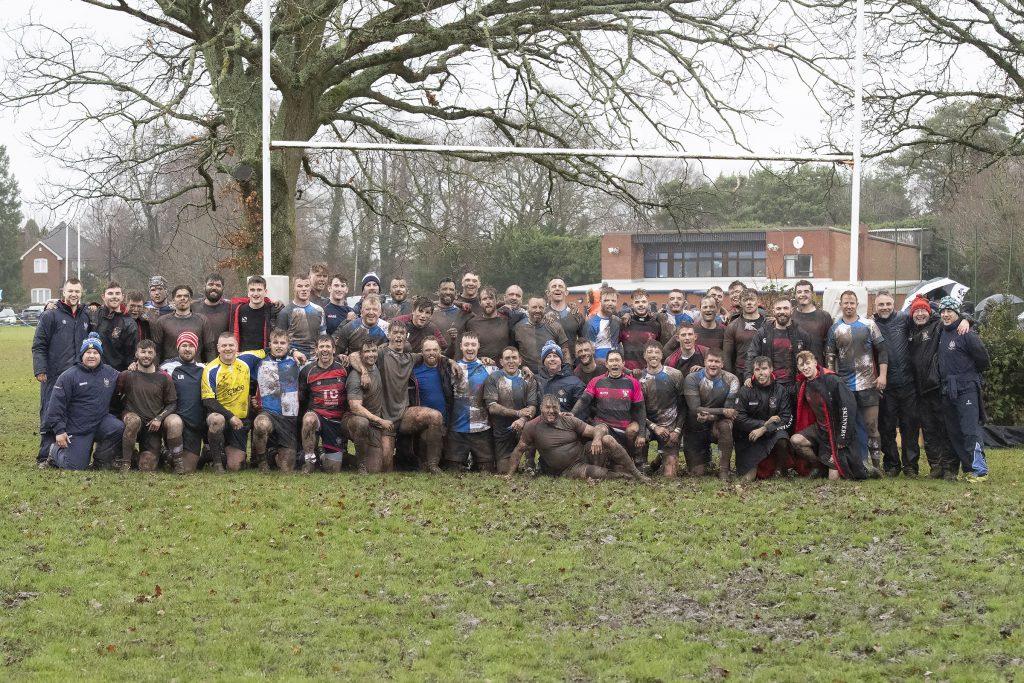 Sadly the sunshine of Christmas Day did not appear at St Marks on Boxing Day for the second annual charity match between TWRFC All Stars an Old Skinners XV. It was debatable whether the game would be on but with over 100 supporters expected, a shortened game was agreed on a pitch that was, understandably, not conducive to producing a fast flowing game of rugby. What it did produce, though, was a very competitive battle with the All Stars mixed in age from 18 to 60+ against a school ‘Old Boys’ side packed with youthfulness. It saw some father/son combinations on opposing sides with Tim McCabe (Tunbridge Well and the Old Skinners Skipper) playing alongside his sons Max and Laurie and John Ridley (Tonbridge Juddians) on the All Stars Side playing alongside his sons Liam and Patrick. It also saw Andy Child (TWRFC) playing alongside his son Harry. A last minute change saw TWRFC Chairman and Veteran Mike Rigby step in to play at 9 for the All Stars.

The game started with referee Andre Van Zijl in control as the All Stars kicked off only for the Old Boys skipper Tim McCabe to knock on. The All Stars had a much bigger pack and were looking to use this to their advantage but it was Old Skinners (and former club Colt) prop Duncan “Bear” Colf who made the first break through, storming into the All Stars 22 only to be partially halted by Harvey Colangelo before his support tacklers took him down. The next phase saw Old Skinners take the lead, though, when they went wide with numbers and Thys Van Der Zanden scored in the corner – unconverted. 0-5.

The All Stars then had their best period of pressure with the forwards at the fore. Guest second row Duncan Hales (London Cornish) using every inch of his 6ft 8” to make inroads into the Old Skinners defence. However, the central area of the pitch where most of the rugby was played was cutting up and it was difficult to gather any momentum.

After a series of assaults near the Old Skinners line, James Webb crashed over from close range with the conversion added for the All Stars to take a 7-5 lead which should have been increased before half time but the Old Skinners defence stayed strong.

The second half saw a lot of changes as fresh faces and clean kit came off the bench to replace some very tired legs. Despite this being a friendly there were some big hits going in all over the park as neither side could find a way through. Both sides came close but it was the defences that held strong. With 5 minutes to go Old Skinners managed to get the ball wide and outside of the All Stars cover and George Gommersall went over for a try converted by Tom Burgess and regained the lead 7-12.

There was still time for the All Stars to strike back and a try looked like it was on its way as the forwards drove to the line. It was Lewis Langman that eventually went over only for the try to be disallowed (correctly) for a double movement. With seconds on the clock Wells had a penalty with the final play of the game. They looked to their Chairman Rigby who had already put a massive shift in to pop the ball into the corner. Unfortunately, his kick went astray and over the dead ball line. It was game over and the All Stars fell short for the second year.

This was more than just a game of rugby, it was a celebration of everything great about Tunbridge Wells rugby club in a game that involved players playing their first game of senior rugby to Andy Maynard in his 60s who can’t stop playing! Returning ex players renewing old friendships and guest players from other clubs who came to show off their skills, all mingled together. With a crowd on nearly 150 towards the end, the clubhouse was packed with post-Christmas cheer reminiscent of some of the old Boxing Day games in years gone by.

This year’s chosen charity was The Pickering Cancer Drop-in Centre in Tunbridge Wells which will receive an estimated £400 from a “Shirt-sale” sponsored by Nortrade. A big thank you is due to everyone that helped get it all together. Long may it continue.