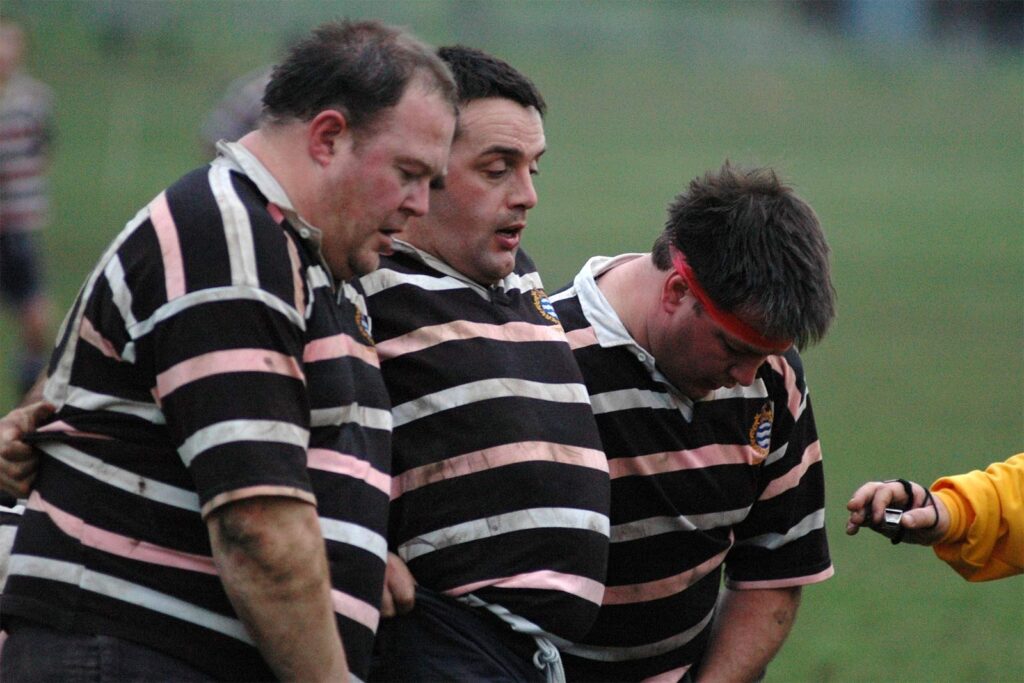 I hope you enjoy reading the next in the series of club member profiles. This comes from a stalwart of the modern game…..”Big Nige” Follows.

“The secondary school I went to in South London during 1979-82 was predominantly a football/cricket/basketball school. However, in my final year there 3 teachers turned up who had an interest in rugby so, consequently, my first experience of the game was in 1982 playing in the front row and also kicking conversions ……the theory then being that to kick a heavy-ish old style Gilbert ball that you needed a big lump to kick it…..

My next secondary school (Croydon at the time had a weird system of secondary schooling) did not play rugby, however the Head of PE had played for London Welsh and was keen to get me playing for a local club. He recommended Shirley Wanderers (now Croydon RFC), where I started in the back row before finishing in the front row, but playing in all sorts of positions when returning from university including fullback and centre….!

I effectively played there in Colts and senior teams until 2000, apart from a brief 3 season interlude at Rosslyn Park, where I made the transition from back row to front row with the help of a wonderful coach called Phil Keith-Roach. (Note from the Editor – many of you will know that Mr Keith-Roach went on to be the scrum coach to England’s 2003 World Cup winning team: https://en.m.wikipedia.org/wiki/Phil_Keith-Roach)

I did, actually play my first 1st XV team game at Shirley Wanderers at 17 in the front row when I was playing in the back row but due to injury moved to front row during the game (it wasn’t a pleasant experience!) My time at Rosslyn Park ended with me rupturing my ACL in my right knee and a change in job location.

By the time my oldest son was 6 in 2003 (turning 7 in November of that year), we had lived in East Sussex for 7 years so returning to Shirley Wanderers/Croydon RFC was not an option and we were equidistant really between East Grinstead, TJs and Tunbridge Wells. Someone gave me Peter Vernon’s phone number, and he suggested I turn up to minis training the next Sunday and to look for the U7s.

I duly turned up and was told to look for a guy with and an Italian sounding name, Fran “something or other” and he would be wandering round with a clipboard. Lo and behold I found  Mr Colangelo and not only was he coaching the U7 minis (along with Neil Bagwell and Clinton Douch ),but he was also captain of the 4th team and so at 35 I was playing the next Saturday against Gravesend….I think alongside Fran.

From playing just a bit of social rugby, I ended up playing mostly with the 2s alongside Tim McCabe, Alan Metcalfe, Simon Parsons, Paul Ashworth, Andy Maynard, Tom Calloway, Pete Binham, Tiggy, Sedgy, Goggles and Graham Withers (I find it easier to remember the forwards). I did play 1s in a cup game at Sidcup where, following being elbowed in the eye (by Pete Binham?!?), I tore my knee cartilage quite badly.

Following surgery to sort out the cartilage and playing more 2’s rugby, I started training again and very surprisingly for me was selected to play against Hove (away, which might be the reason why!) for the first team at about 42 years old (Milo and Sedge were older – phew!) and then played for the ones for the next 2 – 3 seasons, unfortunately in sides that got relegated. That first year back playing first team rugby in London 1 South with Milo, Harry, Sedgy, Tiggy (sorry forwards again ! ) and coached by Jim and Mav, was something I enjoyed massively despite relegation. It was also great playing with some of the young guys from Skinners making their first team debuts, like Cam Corcoran, Ben Madgwick, Rory Reames and others.

Following an Achilles injury and a season’s break, I came back to playing again for the 2s and 3s and have been very fortunate to play with my two oldest sons, Tom and Cameron. I have yet to play with Elliot, my youngest son largely due to Covid, but I hope to be able to do this which will mean at least one more season.

My introduction to the club as mentioned previously was via the minis/juniors, and I am proud that all 3 boys have been through the club and have played senior rugby and that I have helped with their age groups, in particular Tom’s. It is great that the club encourages the junior sides to tour and I have been on some great tours with junior sides – Biarritz, Provence, Jersey and Champagne in particular spring to mind. The guys who run and do most of the coaching of the minis and junior sides do an amazing job – Clinton Douch, Fran Colangelo, Neil Bagwell, Rob Booth, Tim Champion, Simon Ingman, Rob Game, Malcolm Clarke, Dave Brockman to name but a few.

So after Elliot, my youngest son had finished playing junior rugby at the club I thought I would have Sundays off during the season, however my daughter piped up that she would like to have a go. So off we trek back to the club again on a Sunday for Megan to play. Milo, Ollie Allman and Steve Pengelly coach the side and have done an amazing job, and the side has been pretty successful. Megan absolutely loves playing in the team and just has so much fun, either playing or training. A mention should go to Simon Parsons who is Director of Rugby for the Ladies.”

So you know the format by now – please don’t be shy. I am looking for some more club recollections so please send your personal memoirs (with some of your favourite photos) to me at gwithers10@btinternet.com. If you want more details or background then I am happy to chat you through the process.