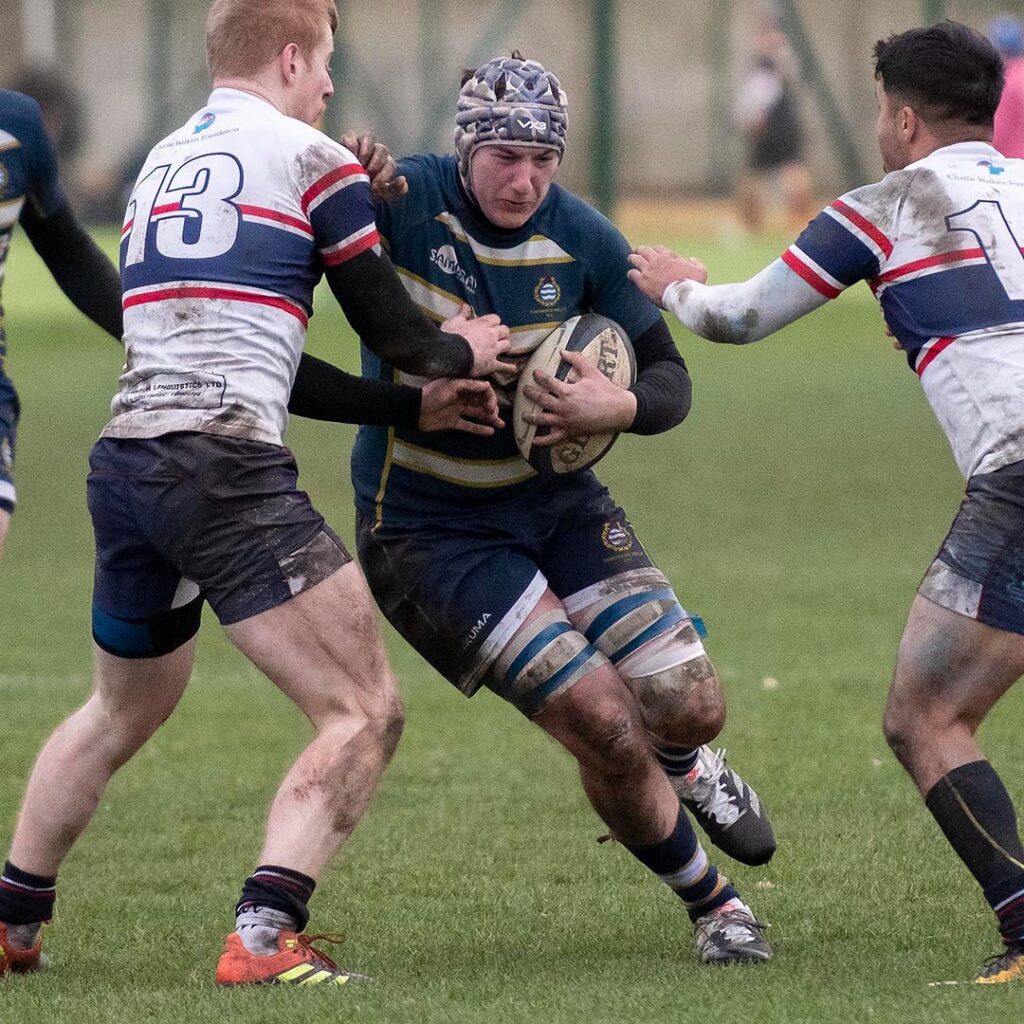 Wells travelled to a tundra like Chiswick on Saturday with high freezing winds, a damp surface and Egyptian geese at the edge of the pitch to add to the impression of Arctic winter conditions.

The visitors had first use of the squally wind but neither side were able to settle into any really constructive play in the first 20 minutes due to the difficulty in handling the ball and the fact that at this stage both sides were relatively evenly balanced.

However. One area where Wells imposed an early dominance was at the set scrummage where the front row of a returning Charlie Smith, Luke Hawkins and Chris Shorter established an early ascendancy which was to last for the full 80 minutes.

Wells had one or two opportunities between defending competently to kick goals with the wind at times at their back. Having spurned at least one close opportunity to opt for scrums Wells finally took the kicking option on 17 minutes with the returning Jack Anderson successfully landing a penalty goal from the half way line to give the visitors the lead 0-3.

For much of the second quarter both sides enjoyed a reasonable share of the ball with Tom Pithouse, Nick Doherty and Josh Hawkins prominent in making yards and in the loose. Disruption though continued as on 27 minutes Tom West another returner at scrum half left the field with a back problem to be replaced by Angus Horne who was pressed into service from the bench in an unfamiliar position. This was not helped by a yellow card for the Wells hooker Luke Hawkins on 30 minutes to further disrupt the side.

Wells then dealt very well with a sustained period of attack but despite the numerical disadvantage a great period of defence over a five minute period saw CS unable to get across the line despite being held up at one point over the whitewash.

It was an untidy losing of possession which then undid a reasonable half against the conditions by CS as a spilled ball was hacked up-field to be retrieved by Wells who recycled to the left of the post with Max Hobbs cutting a great angle to score with Anderson adding the points to give Wells a 0-10 lead at halftime.

With the wind at their backs in the second half it appeared that CS had more than an evens chance of coming out on top, this impression was added to after 43 minutes when scrum half  Harry Vidler kicked a simple penalty 3-10  but it was a different Wells now back to 15 who appeared after the break. Already scrum dominant Josh Hawkins took some great line out ball in the third quarter as hooker Luke Hawkins found his accuracy in the worsening conditions and the encroaching dark. Wells cut out the kicking and found some rhythm to bring some bruising runs out of Nick Doherty at No 8 and some incisive breaks from  Max Hobbs, Mike Doherty and Ali Maine.

CS were not helped as first No 8, Zinny Norman was yellow carded for a high tackle to be followed 8 minutes later by back row colleague No 6 Luke Chadwick for not rolling away at the ruck. With one CS man still off Wells took the game by the scruff of the neck as No 8 Nick Doherty- outstanding all afternoon –  powered over under the posts with Anderson converting 3-17. CS brought play upfield from the KO and received encouragement with Vidler’s second penalty as the game entered the last quarter.6-17.

This though was as close as CS were to get as Wells increased their share of possession and handled very well as they started to spread the ball wider and the home teams tackling went missing. This produced a purple patch of scoring with 19 points in the last seven minutes  with Angus Horne diving to score the first after a huge shunt backwards for CS after a penalty scrum, converted by Anderson 6-24. With 4 minutes to go Max Hobbs put in a 40 metre run down the left to beat the cover for the Wells bonus point and 4 tries with Anderson again converting a difficult kick in the wind 6-31. This still left time in the last minute for the visitors to secure possession and for Mike Doherty to skip down the right touchline for the 5th try which Anderson could not convert. 6-36.

A successful game for Wells and their second away win of the season as a powerful second half display against the wind, a strong defence on their own line, and a dominant platform in the scrum saw them overcome a CS side who were competitive in the first half but whose performance, discipline and tackling fell away after the break and particularly in the last 10 minutes as fitness told. For Wells special mention for Tom Pithouse who put in a physical shift and is growing in his role, for Nick Doherty who made many yards throughout and for centres Mike Doherty and Ali Main as well as double try scorer Max Hobbs. Also a mention for Ben Kayser who is now turning the Wells forwards into a unit who should not be scared of any side in the league when scrummaging and is achieving more accuracy at the lineout.

Wells have a difficult task at St Marks next Saturday when Wimbledon – who are currently in second place in  London and SE Premier – are the visitors to St Marks KO 2PM.