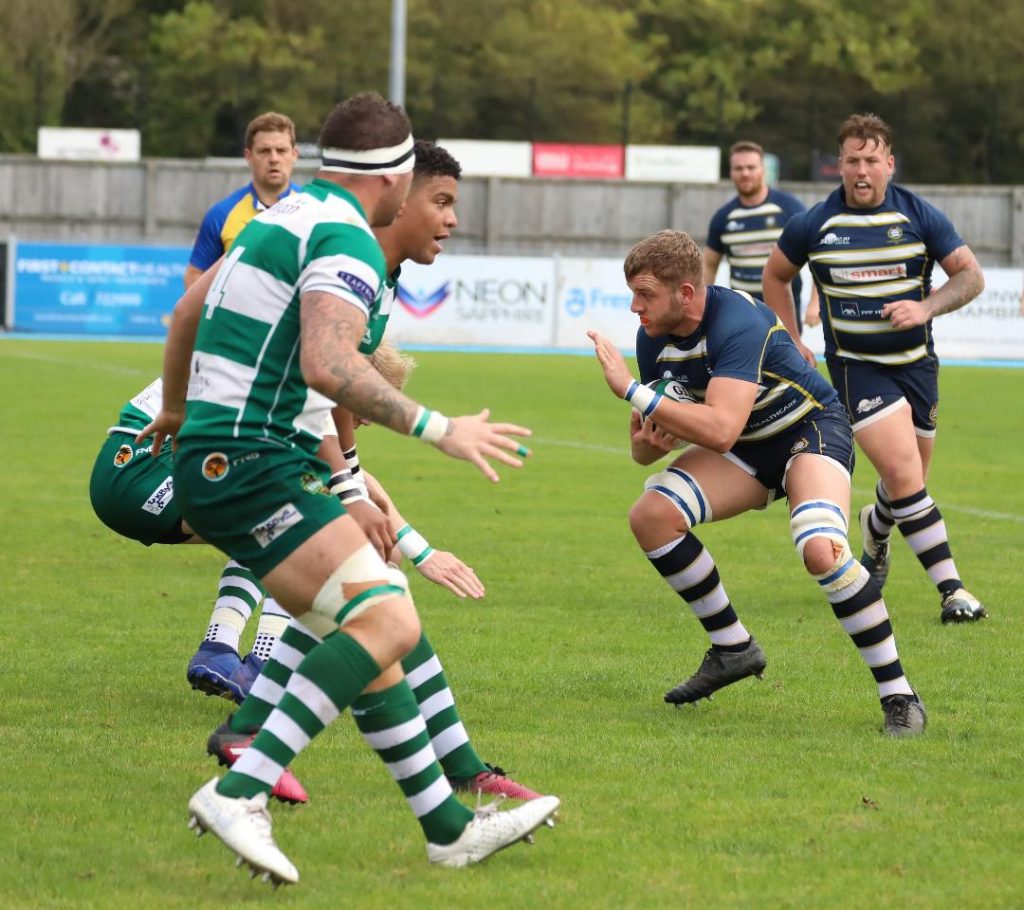 Tunbridge Wells undertook the early-season “tour” that is the league game away to Guernsey with a much-changed team to the one that had lost at home to Hertford. Stuart Nicholls returned at hooker with Luke Hawkins also back as front row cover on the bench. Arek Janeczko moved to the bench too to accommodate the return of mainstay Josh Hawkins in the second row, whist influential players Mike Hathaway and Nick Doherty came into the back row. In the backs, Frank Reynolds returned from injury at outside half which saw George Montgomery amongst the substitutes as Simon Whatling chose to put his faith in the three-quarter line that finished the last game.

This was always going to be one of the toughest games of the season as Guernsey are an ambitious club who only succumbed to relegation late on last season despite a strong finish to their league campaign. They were looking to bounce back from a defeat to league favourites Rochford Hundred and a large crowd was present to see the unveiling of the ground’s new brightly-coloured running track.

The weather was overcast but warm and the dry pitch was in excellent condition, ideal for Wells’ brand of running rugby if they could secure sufficient set-piece ball – one of the clearly apparent issues in the opening four games.

Wells started brightly and were able to exert some early pressure with good continuity, which saw the industrious Ben Whale very much to the fore. He made ground deep into the Guernsey 22 metre area before a knock-on in the backs halted the attack. The opening scrum ominously saw a penalty awarded to the home team and this facet of the game was, sadly, to prove something of an achilles heel for the Kent team throughout the afternoon. The crowd would have been pleased to see that both teams had open rugby in mind. It needed a typical Hathaway turnover to thwart initial home momentum, before an outstanding Max Hobbs tap tackle thwarted what looked like a certain try. However, a sustained period of Guernsey pressure saw a penalty conceded. Electing for the scrum option, the home team’s number 8 Doug Horrocks picked up the ball and surged over for the opening try, converted by Owen Thomas to make it 7-0 on 21 minutes.

Whilst the scrummage was to be under intense pressure throughout, the Tunbridge Wells line-out was much improved this week with Nicholls consistently hitting both Hawkins and Hathaway. It was disappointing, though, that they were not able to take advantage of having a man advantage for 10 minutes when home hooker Tom Ceillam received a yellow card for a stamp. In fact, it was Wells’ discipline that was poor for this period as they conceded some frustrating penalties. This put the hosts back in an  attacking position and after several phases of play a phenomenal long pass from Thomas to winger Matt Armstrong saw him cross for a fine try. With the conversion going wide it was 12-0 on 31 minutes.

Wells were performing with great credit though and came charging back at Guernsey with Hathaway, Reynolds, Ryan Taylor-Dennehy and Mike Doherty combining well. Whale also carried strongly throughout the half. Eventually they earned a penalty in the opposition’s 22 and as last week they opted to kick for the corner and an attacking line-out. Sadly, it was a case of deja-vu as the ball could not be secured. Half Time 12-0.

The boys from St Marks had certainly fronted up in the first 40 minutes and were a shade unlucky not to be on the scoreboard. The backs again looked dangerous with ball in hand with Hobbs popping up all over the field. The spirit and determination of the Wells’ players could not be faulted throughout against the best side they had encountered thus far. Guernsey were able to combine a superb tactical kicking game with a strong set of forwards and a dynamic back-line.

Despite strong defensive work from the likes of Nick Doherty, on 59 minutes Guernsey scored wide in the corner when full-back Anthony Armstrong combined with his brother Matt and the wing bagged his brace of tries and a third team try. Thomas struck a fine conversion from the touchline to make it 19-0.

Janeczko was now on for Josh Hawkins, but the lock’s respite was temporary as he quickly returned for the injured Chris Brown. This saw the impressive Whale move to flanker where he continued his strong carrying and defensive work in a man of the match performance. A penalty against the scrum saw Wells again on the back foot but just as it looked like the rolling maul would cross it was disrupted and it was Hawkins who came up with the ball. However, there was to be no escape as the defensive scrum succumbed to another penalty and from the ensuing attacking line-out this time the maul did power its way over. It was home captain Lewis Hillier who dotted down and although the conversion was missed, the try bonus point was safely secured. 24-0 on 64 minutes.

Luke Hawkins replaced Carl Straeche, and shortly afterwards Montgomery joined the fray for Ollie Allman. Wells now enjoyed a good passage of play and when Reynolds put Mike Doherty into a gap his hard-running line took him clear from 30 metres for another try to add to his impressive collection. Reynolds slotted the extra points to make it 24-7 with 5 minutes to play.
There was, though, still time for one last Guernsey try to seal a thoroughly deserved win. The outstanding Thomas kicked through for left wing Amanaki Veamatahau to gather and score. With the Welshman’s conversion the full time score was 31-7

This was a resounding win by Guernsey but full credit should be paid to the Wells lads for maximising their efforts right to the end. The hosts were very welcoming to all officials, players and supporters and should have a very exciting season ahead of them. For Wells it does not get any easier as they travel to play Rochford for the first time. With the home team joint top of the league and protecting a 52 match winning bonus point run, there will be no time for the players to feel sorry for themselves. However, there is no danger of that with this group and they will no doubt re-double their efforts in training ahead of this Saturday’s trip to Essex. Kick off is 3pm and all travelling support will be gratefully received.

Elsewhere in the LeagueWimbledon and next week’s opponents Rochford Hundred remain locked together on a maximum 25 points after impressive wins at home to Bedford Athletic (53-13) and away to Sidcup (22-45) respectively. Guernsey are now third on 20 points ahead of Sidcup on 17 and Hertford on 16, after they beat London Irish Wild Geese 36-14. We are 6th on 14 points ahead of Dorking (who beat Sevenoaks 26-23) and Tring who won 26-47 at Guildford. In the battle of the two bottom teams CS Stags 1863 will be very relieved to have travelled back from Brighton with a 25-34 win in the bag.

Two other Tunbridge Wells teams took the field and they both gained emphatic wins.

The Second XV won 20-34 away to their Old Colfeians counterparts, where a youthful side had to show great character after a slow start. After 25 minutes they had conceded two unconverted tries but  when Angus Horne crossed the line for a try converted by Tom Burgess they were back in the game. Five minutes later Lucas Scully crossed and it was against the run of play when the home team scored a breakaway try on 35 minutes. Crucially, though, Wells went into the interval in front when Tom Follows powered over on 38 minutes.15-17.

Wells dominated the second half, recovering well from having a seemingly legitimate Scully try disallowed and receiving a yellow card. However, it took until the 70th minute for them to extend their lead when Jack Bear (playing his first game in 5 years) scored a try. Soon afterwards, prop Ciaran Lee got a deserved try (converted by Burgess) to make it 15-29. The Colfes forwards managed to get another try but it was fitting when Harvey Colangelo crossed for the final score to make it 20-34 at full time.