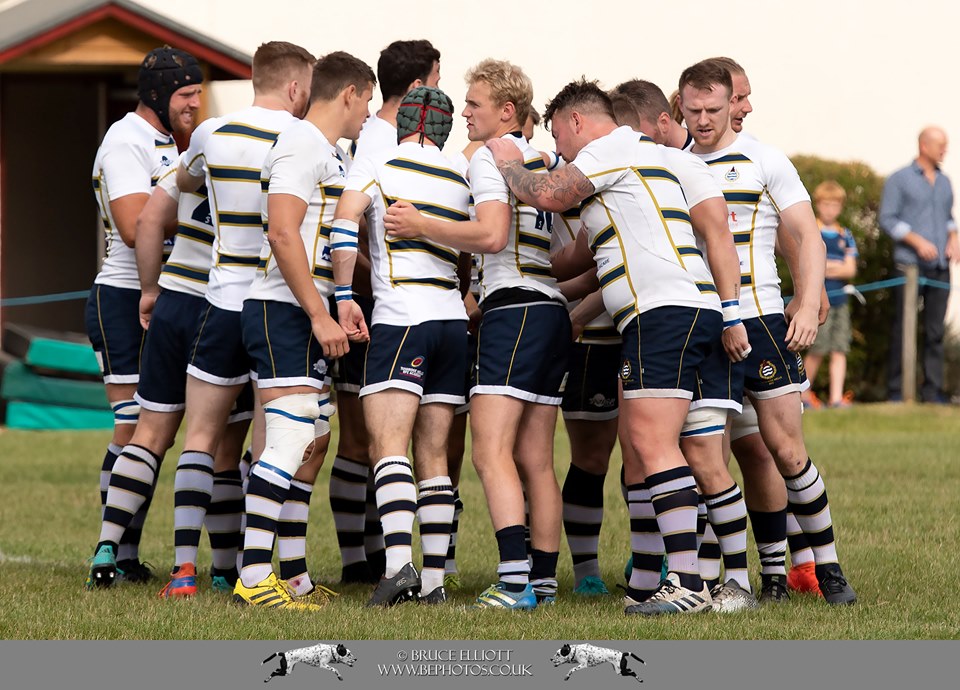 Tunbridge Wells started their 2019/20 London South East Premier Division campaign with a journey to old foes Guildford. The Surrey team won both games last season but Wells finished 4 points ahead of them in the final standings (7th versus 11th in the table).

This will, no doubt, be another highly competitive season with much of the intrigue stemming from the very different set of teams that will make up the level 5 league this time around. With Sutton & Epsom and Westcliff both promoted and the Essex triumvirate of Chingford, Brentwood and Shelford relegated only 9 of last season’s 14 sides remain. Wimbledon, Tring, Hertford and Bedford Athletic (3rd-6th) will again be joined by Sidcup, Dorking, CS Stags and Guildford (8th-11th). It is very easy, though, to make a case that the five new sides will see a significant increase in quality (and ambitions).

Both relegated sides – Guernsey Raiders and London Irish Wild Geese – will be very optimistic of “bouncing back” given their significant financial backing whilst the quality of rugby both and Brighton and Sevenoaks play also augurs well for successful campaigns following promotion. We welcome our good friends from the “Mighty Oaks” to the first ‘A21 Derby’ at St Marks on 9th November. And then we come to the “known unknown” of Rochford Hundred who have won 46 league games in a row in two 100% seasons to reach this level…..

Wells have added several new faces to their squad to replace departed players but overall the opening 18 man squad had a pretty familiar look to it. There were, though, league debuts for forwards Kamil Wiecaszek, Ben Whale and Chris Brown whilst returning students Max Douch, Ben Kennard and Eddie Croft were welcomed back.

The visitors kicked off under dry and warm conditions into an intermittently strong breeze. From the kick-off though it was the home side who were on the attack with flanker Oli Millward breaking through before a 60 metre run. It took a strong tackle from outside half Frank Reynolds (who was to have an impressive game in defence and attack) to stop him. However, a penalty was awarded shortly after and home full-back Ieuen Jones kicked the goal from 35 metres out on two minutes. 3-0.

Wells gained good field position but in what was to be an ominous sign of things to come, the set-scrum was shunted backwards and the home team awarded the first of four straight scrum penalties. Luckily this was a game that was dominated by line-outs rather than scrums but this part of Wells’ game also misfired at times.

Winger Douch was a live-wire all game and both he and Richard Murray made early in-roads ball in hand. However, Guidlford were on top at the breakdown in the first half and were able to steal the ball and send a long clearance kick into the Wells 22. The second scrum brought a second penalty which saw the hosts turn down an easy penalty shot for an attacking line-out.The ensuing maul was thwarted but there was a glaring gap on the blind-side which scrum half Bradley Smith exploited for a try, converted by Jones to make it 10-0 on 14 minutes.

Despite the score this was a game that Wells were very much in. However, twice they gained line-outs deep in Guildford territory only for the throw-in to be adjudged crooked. When hooker Stu Nicholls did find his targets in Mike Hathaway and Whale the boys from St Marks showed good attacking intent and on 23 minutes they got on the scoreboard. Skipper Ryan Taylor-Dennehy, exhibited all his skills again at full-back, and an excellent kick-return gave Wells a toe-hold that led to an offside penalty which Reynolds slotted over from 25 metres. 10-3.

Wells were the only side able to string phases together at this stage as the home team’s frustrations built. Josh Hawkins and Hathaway were carrying in the tight areas as were Douch and Richard Webster out wide but Croft was not able to get the quick ball he needed at 9 to convert this possession into points. A third scrum penalty to the home side released pressure but this was only temporary. Douch and Taylor-Dennehy connected with Nick Doherty to drive into the opposition 22 and when Reynolds was presented with another penalty chance he knocked this over. 10-6 on 33 minutes.
Centre Mike Doherty was now coming more into the game and it was the visitors who finished the second quarter the stronger even though they trailed 10-6 at half time.

What Wells needed in the second half was to shore up their set-piece, concentrate and play disciplined possession rugby. Unfortunately, what they got was a repeat of the opening ten minutes. When Croft’s clearance kick taken back into his own 22 drifted out on the full Guildford were immediately on the front foot. Flanker Millward made another half-break before a delightful offload to Jonny Burden saw the centre score an unconverted try after 42 minutes. 15-6. A breakdown penalty on 49 minutes then saw Jones stretch the lead to 18-6.

Finally, Wells woke from their half-time slumber when a superb breakdown steal by Brown gained a penalty on halfway. Nicholls and Whale combined to secure the line-out and Wells threw themselves into attack. Forwards Doherty, Wiecaszek and Hathaway carried robustly before Reynolds side-stepped the first defender and held off the next two to cross between the posts for a good try which he then converted on 54 minutes. 18-13.
Kennard replaced Brown and the visitors were soon back in Guildford territory after a raking Taylor-Dennehy kick was fumbled into touch 15 metres out. The front row of Wiecaszek, Nicholls and Carl Straeche battled hard all game but number eight Doherty was working hard to control difficult ball at the base of the scrum. They opted for an attacking scrum rather than a line-out but to the dismay of travelling supporters a penalty was conceded. There were 20 minutes plus injury time to go so was this to be a key moment? Well, the answer was categorically “no” as Wells were now dominant. They had the lion’s share of possession all game, despite the set-piece failings, and were turning the screw.

George Montgomery now replaced Murray in the centre and he was to have a significant influence in the final-quarter. A thumping Douch tackle and a brave Wiecaszek turnover kept the hosts on the back-foot and after sustained pressure home centre Jack Potter received a yellow card for killing the ball on 68 minutes. The lively Luke Hawkins was also now on for Straeche in the front row with Nicholls moving to prop from hooker. An attacking line-out was gathered in and the Wells forwards threw themselves at the line. After a series of ‘pick and go’ thrusts Guildford incurred the wrath of the (excellent) referee for persistent offside and he awarded a penalty try on 73 minutes. 18-20.

Wells were now looking reasonably assured having gained the lead for the first time. Centre Doherty, Montgomery and Reynolds challenged the Guildford backs who were, of course, a man short. One particularly good 40 metre Montgomery kick helped to sustain this pressure so it was somewhat against the run of play when a turnover and long kick ahead saw Wells forced back to take a 22 metre drop out as normal time ran out. However, this was to prove the catalyst for a brilliant Wells try. The defence held firm forcing Guildford in to touch on halfway but  showing admirable ambition Douch took a quick line-out to Croft who did really well to find Montgomery. Kennard and Luke Hawkins took their turn carrying the ball before a trademark Hathaway surge saw Wells deep in Guildford territory on the left wing. With the defence now severely stretched Montgomery’s vision enabled him to send a cross-field 40 metre kick to Nick Doherty who was lurking on the opposite wing to gather and touch down. Reynolds’ conversion slipped wide on 82 minutes. 18-25.

However, with the lead just 7 points the game was not won and a series of penalties saw Guildford spark back into life. One final attacking line-out veered off the straight though and with a resolute last scrum the win was confirmed.

One of the exciting things about this part of the season is that you simply do not know the strength of the sides around you so it usually takes 5 to 6 games to get a “feel” for how the land lies. What is clear, based on this performance though, is that this Wells squad is big of heart and spirit. This was a fully deserved win (with Reynolds, Douch and Whale to the fore) and at least the set-piece weaknesses are predominantly technical issues that the coaches and players will be able to remedy.

The Tunbridge Wells II XV also played at Guildford with one of the key mantras this season being two teams, but one squad. This team was a mixture of youth and experience (with evergreen 49 year-old Zak Martin adding most of the latter!) but despite taking an early lead through an Ollie Allman try, that he converted himself, they succumbed to a 21-7 defeat. Ensuring an enlarged squad, that remains competitive throughout, is one of the best ways that the First XV can set a solid platform for league season ahead.

Next week (September 14th) brings a home game against another Surrey side in the shape of Dorking. Kick off at St Marks is 3pm and all support will be gratefully received.

There were only two home winners from the seven games. Wimbledon barely missed out on promotion last season and showed they are likely to be in the mix again with a 25-17 win over London Irish WG. Sidcup’s 15-7 win over CS Stags was the only other home victory. Three “newbies” Guernsey, Rochford Hundred and Sevenoaks won on their travels: 20-43 at Dorking, 11-28 at Tring and 11-25 at Bedford Athletic respectively. Finally, Hertford will be delighted with a 24-40 victory at Brighton. Interesting times ahead methinks…..