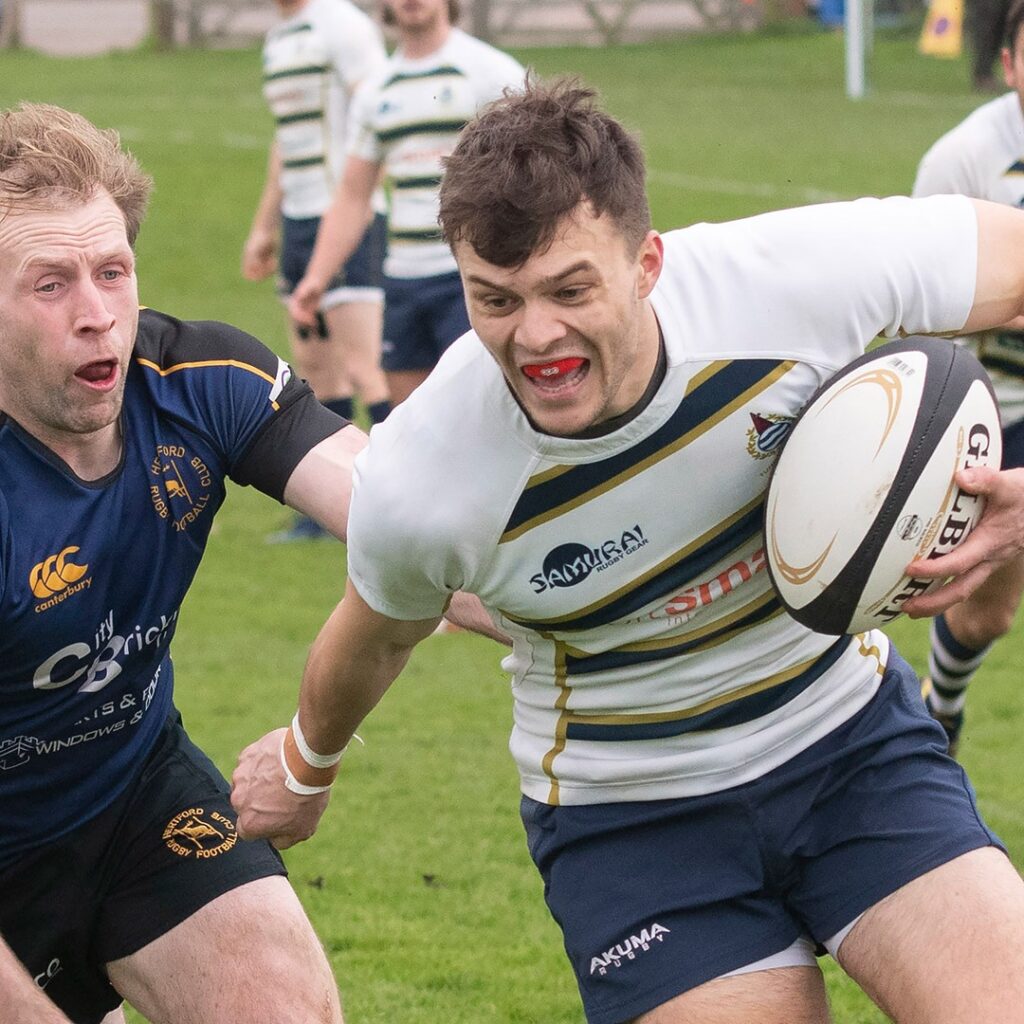 On a dry but overcast Saturday afternoon TWRFC travelled to Hertford RFC for this 1st XV fixture.  Hertford have been there or thereabouts in this league over recent seasons finishing in 4th, 5th & 4th over the last three seasons.  Our last two visits to Hertford resulted in very close losses with only two points in it on our last visit, and just one point the season before.  This was all set to be another tough but well-matched encounter between the two clubs.

The tannoy was deployed from the outset, and regularly throughout the match, to the delight of the vociferous home crowd.

As has been the case so often this season it wasn’t long before Wells conceded an early try.  Hertford showed their game plan and it was simple, yet effective. Utilise a well-drilled pack to set the foundation. Phases. Work to suck the defence in, then use fast ball through hands out wide.  In the 4th minute the ball found its way out to the Hertford 15, Charlie Parkhouse, who made no mistake and took it in. 5-0. He was to be a challenge all afternoon!

The Hertford pack was a little stronger throughout the first half, but for the most part not so much that it posed significant problems. There was no further score for 25 minutes. During this time Ali Main came off after a head knock, replaced by Rich Murray.

Wells ground their way back into the match playing for long periods in the Hertford half. A succession of penalties relieved pressure though, and it was Hertford again putting points on the board in the 30th minute.

Hertford made good ground taking the attack into the Wells 22m.  The ball headed out wide and found a Hertford prop who ran straight.  Wells defence stood off and after 10m he offloaded to Charlie Parkhouse for his brace.  10-0

Two minutes later a high tackle by the Hertford 8 on Max Hobbs saw him receive a yellow card.  A nice central penalty then gave Luke Giles the opportunity to put Wells on the board. 10-3.

This was a brutally physical encounter throughout.  Only a few minutes later and Jake Smith was on the wrong end of an entirely fair but crunching tackle which saw him leave the field.

Just on the stroke of half time there was one notable scrum which saw Wells pushed straight back some metres.  Toby Talbot came away with the ball, but the ref called a penalty for Hertford, with some confusion pitch-side as to the reason. Hertford missed the kick and half time came. 10-3.

There was some concern among the travelling support about the strength of that last scrum and what it could mean for the second half, but although Hertford had started strongly Wells certainly weren’t out of the running having matched them for most of the half and with Hertford playing downhill.

Much would depend on the first score of the second half.

Wells claimed the ball quickly after kick-off and kicked through. It was the Hertford 15 who was first to the ball and touched it down in the in goal area.  From the drop out Nick Doherty received and carried.  The ensuing ruck led to a Hertford infringement giving Wells the opportunity to put some points on the board with a penalty kick, but unfortunately the ball came back off the post.

Continued pressure from Wells saw play mostly between the halfway line and Hertford’s 22m for long periods of time.  The Hertford 10 earned himself a yellow and Wells made the most of it with a penalty kick to the corner for the lineout.  Stu Nicholls threw to the front man, Gabe O’Brien, who returned it to Stu Nicholls and he made no mistake taking it in to the corner for a diving try. 59 minutes played. 10-8. A well-worked and thoroughly deserved try.

A few minutes later, frustratingly, Charley Smith earned himself a yellow for a tip tackle meaning both sides were now down to 14.

The 66th minute saw Hertford’s first significant second half foray into Wells half with a 60m break, only stopped with a last ditch tackle. Pressure was relieved and play gradually moved back up field. As Wells worked to find those few points to take the win Hertford retrieved the ball once more and built pressure.  With a strong break from the Hertford 12 in the 80th minute it was all hands to defence.  Hertford spun the ball out once more, and although there were three Wells defenders on the final man, with pace and momentum Hertford managed to ground the ball for the final score of 17-8.

Every Wells player on the pitch put in a full shift.  Once Hertford’s game plan was clear we countered and minimised their opportunities to put points on the board.  This was the most physical match of the season thus far, and every player put their body on the line doing what was asked of them.  As frustrating as this start of the season has been at times, it’s clear that all of the components of a winning squad are in place and the wins will come.