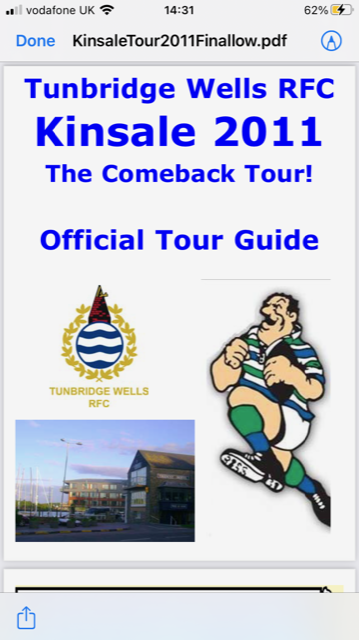 This May Bank Holiday weekend marks the 10th Anniversary of the club’s first ‘modern-day’ tour to Kinsale.

That the 2011, 2012 and 2014 “Believe” Tour took place at all was on the back of what Ron Birkby quite rightly describes as “groundbreaking” trips a decade or so earlier (and for “fans” of the 2003 Tour keep your eyes pealed for a trip down memory lane tomorrow…..)

Of course, much of what took place in County Cork in 2011 falls under the hallowed “What goes on tour, stays on tour” rule….thankfully…. #wgotsot.

However, there are some stories that can be shared which when coupled with the photo gallery below, will serve to evoke and stir very fond memories for all that made the trip.

We left from the club at 10.30 on Friday 29th April, many of us after a “slap up” breakfast and beers…as if we needed a head start lol…..at Spoons. The Forwards were to wear crowns and the Backs wore eminently suitable tiaras as homage to the Royal Wedding of William and Kate that very day.

As Tour Priest I was immediately to work as the first rehearsal of my Tour Choir (Masters Dedman, Sparkhall, Maynard, Montgomery and the Corcorans – Josh and Cam) and then a premiere performance took place at Gatwick, with another on arrival at Cork airport. The boys worked hard and were mighty impressive….even if I say so myself, performing at each Tour Court and throughout all four days. In 2012 we added a Cheerleader Squad and 2014 a Mariachi band playing ukeles and distributing Doritos and dips, but I think it’s fair to say that the 2011 Choir remains the pinnacle. We performed at the 2011 Club Supper too:-https://m.youtube.com/watch?v=yBnT3otovRA&feature=youtu.be

Whilst off the pitch activities largely fall under the #wgotsot rule, the on-field activities deserve pride of place here.

We entered two teams – one in the Junior Open and a second Veteran 10s team. I think it is pretty fair to say that the TW Animal Surgeons (Vets….see what we did there?) were not at their best during the Saturday morning qualifying session. However, we did enough to make it through to the Final against the local undefeated Kinsale Vets. It was “big game” time now and we even stopped drinking(ish) an hour before kick off in readiness as possible glory awaited…..and we grabbed it with both hands beating the locals 10-7 with JC and Bobby G to the fore, and with a phenomenal late cover tackle from Mr Paul Miles securing the win. Cue major celebrations and another Murphys or ten (County Cork being Murphys not Guinness territory).

The Kinsale Sevens prided itself in being the largest 7s tournament in Europe at the time and, consequently, despite fielding a very talented First/Second team squad, more losses than wins on Day One meant we would be playing in the Junior Plate knockout event on the Sunday……and more of that shortly.

Unless you have been to Kinsale on Sevens weekend, it is hard to emphasise quite how brilliantly organised the event is. Everyone in this gorgeous fishing village is involved in the event and the atmosphere throughout the place is electric – all day and all night! Before hitting the nightlife on Saturday we had booked a full squad dinner at our base, the famous Trident Hotel. The Animal Surgeons were still basking in the aura of victory and we all needed a good feed to sustain us by now. And what a feed it was – “Potato….Potato….Potato!” Steak & Kidney Pie and carrots, garnished with “Roast Potatoes, Chips and Mash”….the days of famine were clearly over

We arrived at the ground on Sunday morning anticipating a full days drinking, and given a boisterous evening’s entertainment, just a limited amount of rugby to watch from the TW team. How wrong we were…..showing admirable “bouncebackability”, three morning wins suddenly saw the boys reach the afternoon quarter and semi finals and then….suddenly….we were in the Final! I have no doubt that the raucous touchline support contributed (fuelled by some superb “liberation” of beer vouchers by that morning’s Mustard & Ketchup slaves messrs Claridge and Crees junior)…..as did Andy Hill’s charismatic leadership as Band Master that saw the rest of the squad take to the field in marching band formation at half-time in each of their games.

And on to the Junior Men’s Plate Final – held on the main pitch in front of a very large Sunday afternon crowd. Alex Maynard and David Sparkhall’s “wheels” had been key weapons all day but in the final it was some of the older heads – Tiggy Bartley, Rob Harrison, James Gwinnett and Killian Casey who stepped up. However, leading 24-19 in the final seconds, there was dismay when our opponents crossed in the corner and had a touchline conversion to win it. Thankfully, it sailed wide and the Tour Priest and Tour Chairman John Crees were quickly on the case with the organisers over who should be awarded the win.

The rules quite clearly stated that no extra time was to be played and that the winner would be the side that had scored the first try. Once we became aware that the referee and the opposition were actually unsure as to which team had crossed the whitewash first, Mr Crees was “on fire” as he explained that “rules is rules” and that we had scored the first try. Such was his utter conviction that no one argued and we were the champions – the honest truth is that no one actually knew who’d scored first (well apart from Mr Crees and I it seemed and, shall we say, I think it’s fair to suggest that we “liberated” this one too….)

Different tourists make for different tours and I, personally, had great enjoyment from the next two to Kinsale as well, as I was able to share them with more friends and both my sons. However, Kinsale 2011 remains up there with the very fondest of rugby memories for yours truly and, no doubt, all in attendance.