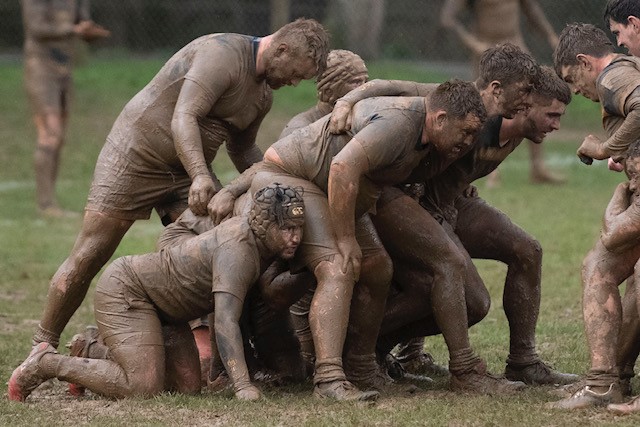 It was warm and dry ahead of the second A21 Derby match of the season…… At least it was in the clubhouse where a large contingent of Tunbridge Wells supporters joined the merry throng of 90 that sat down to a scrumptious chicken curry lunch with our rugby-friends at Sevenoaks.

Early success was registered here with three of the four raffle prizes being bagged by Wells-dominated tables, and I will be very surprised if the blue riband prize of a bottle of Glenmorangie left the club intact having been won by the table containing Messrs Fleming and Whiting……

However, the weather outside were as far from “warm and dry” as could be imagined, with torrential rain and a fierce gale force (if not quite Storm Eunice) wind howling down the pitch. Clearly not conducive to good, open error-free rugby, and certainly not helpful for your correspondent who remains steadfastly “old skool” in using pen and paper when taking match report notes.

Wells arrived at the Paddock with confidence boosted after a shock 23-20 win over league-leaders Hertford the week before, but that this meant they still sat 13th in the league, 11 places behind their hosts, simply served to underline their under-dog status – especially after a humbling 0-45 defeat at home to Sevenoaks earlier in the season. Despite the atrocious conditions it is testament to the quality of the players on the pitch that a competitive game was to unfold and, and whilst Sevenoaks was certainly deserving winners, one could argue that the score line was perhaps a shade flattering in the end.

It is to the credit of both clubs that the core of each squad consists of locally raised and nurtured rugby players. Sevenoaks have added some outstanding overseas quality to the local foundation, and although Wells have recruited several young players as part of this season’s rebuilding process, it was striking at 11 of the 18 match-day squad have come through the ranks at St Marks.

Oaks kicked off with the wind directly behind them and were to spend the next 40 minutes pretty much camped in the Tunbridge Wells half. The visitors were dealt a significant early blow when exciting new hooker Ben Mutch (fresh from a man of the match debut performance last week having joined from TJs) seemingly broke his nose after just three minutes. This meant an early introduction for Cameron Follows and saw the multi-talented Nick Doherty takeover lineout throwing duties.

An ominous early 30-metre rolling maul saw the home team deep in the Wells 22, although to be fair the visitors by and large defended this highly effective and efficient part of the Oaks game well. A strong scrum gave impetus to the home side’s attack and scrum-half Henry Galligan was able to dummy and cross the line for the opening try on 9 minutes. Ben Adams was unable to convert from out wide. 5-0.

Wells were fiercely competitive at the breakdown throughout and shortly after the restart Follows secured an excellent jackal to earn his side a penalty. With the wind testing even the most experienced of hookers, the visitors’ lineout was under pressure, and this made it difficult to build sustained territory or keep possession, as was needed in the face of the gale. Scrum-half Tom West executed a series of good and productive box kicks but whenever Sevenoaks had the ball they were able to gain significant yardage using the boot with the wind and, despite the conditions, to their credit by often looking to play wide with the ball in hand too.

On 19 minutes Oaks skipper Nigel Gumbleton made a strong charge through the midfield and despite being hauled down short, quick ball saw Adams release to the overlapping Awa Morris to touchdown for a second home score. Again, the wide-out conversion proved virtually impossible, but it was now 10-0.

Wells had now been forced into a further re-jigging of their resources when a rib injury saw flanker Jake Smith depart, to be replaced by ‘birthday-boy’ Richard Webster. Mutch now returned to bolster the pack, but his valiant efforts were to prove short-lived when an inability to stem the blood flow from his nose saw him substituted again, and this time permanently.

The Tunbridge wells front five of Charley Smith, Mutch/Follows, Gabriel O’Brien, Jack Lord and Tom Pithouse worked tenaciously throughout, and the scrum was now gaining parity. As the pitch turned into the proverbial mud-bath, Oaks continued to pound away at the Wells line but one or two misplaced kicks, coupled with some fierce defensive hits held off the hosts until the 38th minute.

A robust Fred Richardson run gave the home team good field position and eventually lead to an attacking five-metre lineout. Despite terrific defensive work from both Pithouse and Number 8 Doherty, flanker Matt McRae was able to burrow his way to the line from close-range, and this time Adams was able to convert. 17-0.

Shortly afterwards Wells had their first attacking line out in the Oaks 22 but when the ball fell lose it was former Wells product Scott Sedgwick who seized on it before making 20 metres up field. Oaks looked to go wide to force home their advantage but were thwarted by good defensive work from a combination of wing Max Hobbs and centre Rich Murray.

It was typical of Wells luck this season that when the players returned for the second half there has been a noticeable drop in both wind and rain. However, the underfoot conditions were almost unplayable by now and one can only tip one’s cap to all 36 players for their endeavour.

What the visitors needed was to start the second 40 minutes on the front foot, if only to give them some breathing space. Sadly, with the ball exhibiting Imperial Leather like qualities (and other soap brands are available), a mistake behind the Wells scrum saw Sevenoaks recover the ball. After a driving run by Drew Narbey-Nimeti, Gumbleton was on hand to power over between the posts. Adams converted and after 42 minutes it was now 24-0 with the try bonus point secured.

West, his outside half Fin White, and skipper Mike Doherty at inside centre tried their best to engineer better field position for the boys from St Marks, but both kicking and running the ball was now proving troublesome for both teams. Doherty also made one particularly huge hit on ex-Wells centre Shaydn Osgood to “welcome” his former team mate to the field when he made an appearance as a replacement. The phrase a “war of attrition” can hardly have been better utilised in a game of rugby.

An injury to Hobbs saw Webster revert to his more accustomed wing position and a first cap from the bench for Max McCabe who slotted into the back row. He announced his arrival with a superb chop tackle (with several more to follow) and hopefully he enjoyed his first taste of rugby at this level – even if all he could probably taste at this stage was Knole Paddock mud!

Oaks remained dominant in terms of possession and on 52 minutes it took a superb Toby Wallace tackle followed by a 40-metre West clearance kick to alleviate the pressure.  Murray and wing Max Douch also made important tackles to keep the home side at bay.

Those of you have followed “my work” over the years will, will know that I have a particular passion for a well delivered rolling maul. Indeed, in my many years of involvement with local rugby, it is Sevenoaks who have often provided the “thing of beauty” that such a set piece can provide – whether at Junior or Senior level. However, it only earns a team 5 points from a try (or perhaps 7 if a penalty try ensues) whether performed in an aesthetically pleasing way, or as was the case on 60 minutes, in a more functional and, dare I say it “ugly” manner. On this occasion it was Oaks prop James Simmons who benefited in scoring a try, which capped off a fine all-round performance by the loose-head. 29-0.

Having failed to register a point in the season’s first encounter in October, Wells were determined to try and breach the Oaks line. This effort was never more exemplified than in a rumbustious 20-metre pick up and drive from the base of the scrum by Wells’ man of the match Nick Doherty.  Sadly, the ensuing possession was lost and Oaks were able to launch a counter-attack engineered by their man of the match outside-half Patrick Pellegrini. Great covering work by the industrious Lord and hard-working flanker Toby Talbot was needed to bring this attack to a halt.

However, when an off the ball skirmish saw the referee halt play with Wells in possession, it was to the incredulity of the travelling support that the match was re-started with an attacking Oaks scrum. This was a tough day for the “merry whistle-blower”, Matt Rozier, who did his best despite playing shirts becoming increasingly caked in mud, thereby making offsides difficult to differentiate, and also several “little” wet weather knock-ons taking place on his blindside. This was a day when he could certainly have used the assistance of qualified Assistant Referees, but we do not have that luxury at Level Five. Instead, he only had the urgings of the vocal touchline support, and I am not quite sure how unbiased this advice was………

From this scrum, the outstanding Pellegrini scythed through the visiting defence before drawing full-back Wallace and passing to his open-side flanker McRae, who galloped in for his second try of the day. That the final pass was more NFL then RFU should take nothing away from the outside half’s overall performance, nor should it from McRae’s fine supporting line. Adams added the conversion to make it 36-0 on 73 minutes.

Four minutes later the game was over – inside the full 80 minutes but perhaps a sensible call when one of the Wells players managed to tackle his own man, so indistinguishable were the playing shirts by this time!

This result sees Sevenoaks maintain second spot in the league, just one point behind leaders Dorking and Wells’ players now have a week off to regroup and try and rest some battered bodies ahead of their next game which is another Kent Derby at home to a much-improved Westcombe Park on Saturday 5th March. Kick-off will be 2.30 at St Marks and all support would be gratefully received.