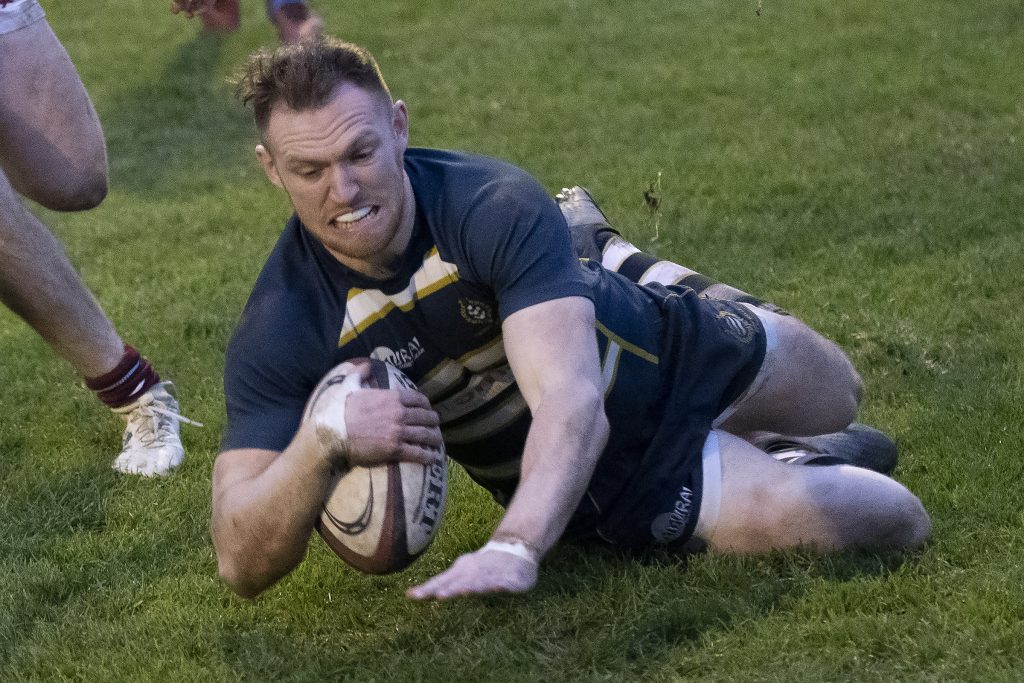 Tunbridge Wells travelled to South London to face a Sidcup side who were pleased to welcome back some key players from injury. The visitors were able to make just one change from the side that had beaten Bedford Athletic two weeks ago with Josh Hawkins covering Ben Whale’s pre-arranged sabbatical in the back row, and Tom Follows coming onto the bench.

Sidcup are able to play their games under floodlights, which can add to a raucous home atmosphere, but with little breeze to speak of and good underfoot conditions the healthy travelling support were justifiably optimistic of an open game and a Wells win. Sadly, whilst it was indeed an “open” match, it was the Sydney Road faithful who were sinking the celebratory post-match beers.

The home side kicked off playing towards the clubhouse and the opening 10 minutes was characterised by a mixture of kicking for territory by Sidcup and Wells trying to counter by moving the ball wide. The in-form wing Max Hobbs was very much involved but sometime, perhaps, the desire to get the ball to him was at the expense pf creating space first. The Wells back line seemed a shade flat throughout – both in terms of positioning and energy – and this was to lead to both interceptions and spilt ball as the home side played on the edge of the offside line.

Having received a penalty at the first scrum of the game, Sidcup kicked to gain an attacking line-out and it needed strong defence form Agy Eukaliti and Josh Hawkins to hold them at bay after a good back-peel move. James Pancaldi was industrious throughout and he made a fine steal to relieve the pressure. However, the next scrum saw a further penalty and it was surprising that the home side’s excellent goal-kicking outside half Josh Twyford pushed his kick wide from 35 metres.

Sidcup’s indside-centre Colby McMahon was used effectively and another bustling run put Sidcup on the attack prior to Pancaldi and Eukaliti combining to steal the ball. Hobbs set off down the left-wing in a dangerous looking counter-attack but when his inside pass went astray on halfway it was Sidcup who reacted quickest. Switching the ball fluidly to the opposite wing it was centre Oli Vidgeon who dummied and went over from 30 metres for a try converted by Twyford on 13 minutes. 7-0.

The hosts were in the ascendancy and despite another important Pancaldi tackle, a clever grubber kick pushed Wells back. However, Tui Tauaika and Eukaliti connected at the line-out and Frank Reynolds cleared well. Sidcup had the ball again on half-way but when it was lost Eddie Croft fed Nick Doherty who found his brother Mike to kick-start a dangerous counter-attack. George Montgomery took it on and released Reynolds but he was hauled down agonisingly short. Tauaika, showing great mobility for a prop, was thwarted as he tried to drive over but Nick Doherty was typically opportunistic reaching over from the base of the ruck for an unconverted try. 7-5 after 24 minutes.

Sadly for Wells, every time they scored Sidcup came back strongly as the men from St Marks proved to be imprecise at the re-starts. A clever Sidcup kick put the visitors back deep in their own 22 and when the hosts were awarded a free-kick for a line-out offence the alarm bells started to ring. Opting for a scrum, Sidcup earned a penalty when the Wells pack collapsed. There was then a certain inevitability when the next scrum did likewise as it moved backwards and the referee correctly awarded a Penalty Try. This made it 14-5 after 28 minutes.

A scrappy period of play now ensued during which the ever-willing Hobbs received a heavy blow to his leg and was replaced by Ollie Allman, who moved to full-back with Taylor-Dennehy going onto the wing. When Pancaldi earned a penalty at the breakdown Wells had the first of three attacking line-outs but it took good work form Carl Straeche to secure the ball when a maul went wrong, and keep the visitors on the front foot. Soon after Tauaika burst clear and earned a penalty 20 metres out and Reynolds will have been disappointed when his kick slipped wide.

Despite this it was Wells who ended the half looking the more dangerous of the two teams and were unlucky when a late Mike Doherty attack was thwarted when he was adjudged to have been in touch as he tried to find the supporting Stuart Nicholls. Half Time 14-5.

What Wells needed was a positive start and they most certainly got it. However, it also proved the catalyst for a rather ‘bonkers’ nine minutes that saws 4 tries culminating in a controversial (and perhaps crucial) second Penalty Try. Nick Doherty put Wells on the front foot linking with Allman and Harvey Colangelo. The ball was then spun to Taylor-Dennehy who made a superb arc-ing outside break from 35 metres out. He then found Reynolds on his inside shoulder who cleverly drew the defending full-back before giving it back to the skipper to score under the posts. With Reynolds adding the extra two it was now 14-12 after 43 minutes.

Sidcup came thundering back though. Having gathered the ball from the re-start, lock Freddy Ruff then found a glaring hole in the Wells ruck defence and burst clear 30 metres out before powering through Allman’s despairing last-ditch tackle and scoring under the posts. With Twyford’s conversion the lead was stretched to two scores again after 45 minutes. 21-12.

And then back came Wells. Croft was able to gather a charged-down ball and made ground. Nick Doherty found Eukaliti and when he was tackled it looked like the chance might have gone begging. However, this was not to be the case as clever play down the blind-side saw centre Mike Doherty power his way over for a try that was superbly converted from the left touch-line by Reynolds. 47 minutes played and with 3 tries in 4 minutes it was now 21-19.

In what had now become attack v defence Sidcup were soon back in Wells territory but solid defence from the boys from St Marks held them out and they were then able to launch a counter-attack on halfway when Nick Doherty came away with the ball. Unfortunately, when a Wells pass went to ground it was McMahon who reacted first and kicked the ball ahead. He was some 5 metres clear as he put boot to ball again but Mike Doherty made flying strides to get back and, in a shoulder-to shoulder challenge, dived first on the ball a metre short of the line. However, to the incredulity of the visiting supporters, the referee awarded a Penalty Try and showed Doherty a yellow card too to further compound the anguish. 28-19 on 52 minutes.

Sidcup tried to turn the screw now and received two more scrum penalties to gain territory. However, a fine Montgomery clearance kick gave the boys in blue an attacking line-out on the host’s 22. The ball was overthrown and the home side cleared before a skirmish ensued on halfway. The game had been played in a competitive, but fair, spirit up to this point so it was a shade surprising when Josh Hawkins and Sidcup flanker Lennie Bush received yellow cards on 57 minutes. It was now 14 v 13…..

The game went into something of a lull which clearly better suited the team in front. A good Wells attack started by a strong Nick Doherty carry faltered when an Allman kick went straight into touch but the replacement almost immediately redeemed himself when he chased and gathered his own clearance kick. Tuauika made further in-roads before Colangelo took the ball on. However, as was too often the case a pass went astray and Sidcup were awarded the scrum. A penalty then enabled them to clear.

Mike Doherty returned from his unlucky sin-binning and although both teams were still showing some ambition the next phase of the game was characterised by rather wayward kicking. Eventually, Sidcup were awarded a scrum just inside the Wells half and when this moved inexorably backwards, and then sideways, the referee had little option but to award a penalty. Twyford stepped up a sent a mighty 45 metres kick between the sticks to stretch the lead to 31-19 with 12 minutes to play. Chris Brown now replaced the fiercely-competitive Hawkins.

The game was to be pretty much settled on 71 minutes and again it came from careless Wells play after an initially impressive attack. Montgomery and Mike Doherty combined to set the latter away down the right wing. The ball was recycled quickly but a wide, looping, pass to the left was picked off by home wing Andre Patterson who held off two defenders to run the ball in from 65 metres. With Twyford’s conversion the game was pretty much settled at 38-19.

This was a disappointing day at the office for Wells but they continued to battle – no one more so than Nick Doherty who made a 40 metre break from his own line. In all honesty they did not look like securing the try bonus point and also lost Eukaliti to a yellow card for a “no arms” tackle as time ebbed away. Sidcup fully deserved this victory and whilst they undoubtedly had the rub of the green on some important decisions, Wells really did not show enough to earn a win in a game that could have gone either way until the final quarter. Another reminder (if needed) of how you can be hurt by all the teams at this level if you drop your own standards by just a few notches.

The games do not get any easier for Wells as this week they host league leaders Wimbledon, who will no doubt be smarting from losing their unbeaten record at home to second-placed Guernsey. Kick off at St Marks is 2pm.

Wells Second XV’s game at Sidcup was called off, so it was the Third XV who restored some pride with a convincing 45-17 win over Hastings & Bexhill II. Ciaran Lee scored a hat-trick of tries, Jack Beaman got a brace and Alex Mason and Jamie Piggins dotted down as well. Piggins also kicked 5 conversions.

It was Guernsey who emerged with the honours in their top of the table clash at Wimbledon. Their 16-22 win ended the host’s unbeaten record and narrowed the gap to two points with Wimbledon on 55 and Guernsey on 53. Rochford Hundred join the channel islanders on 53 after a thoroughly convincing 38-3 victory over our friends at Sevenoaks. Hertford’s tight 15-22 victory at bottom-placed Guildford sees them leapfrog us into 4th on 36. We come next on 34, then Sevenoaks on 31 and Sidcup’s well-earned bonus point win moves them to 7th on 30 points. Dorking drop to 8th on 28 after a home 21-21 draw against a much-improved Brighton. There is a 5 point gap to Tring and Bedford Athletic on 23 points, after both had encouraging home bonus-point wins against CS Stags (42-31) and London Irish Wild Geese (26-17) respectively. Stags and Brighton are then jointly on 17 points, London Irish on 15 and Guildford remain at the bottom on 8 points.

The two main games to note next week are our clash with the league-leaders Wimbledon and it will be interesting to see how a resurgent Brighton get on when they host Rochford Hundred.