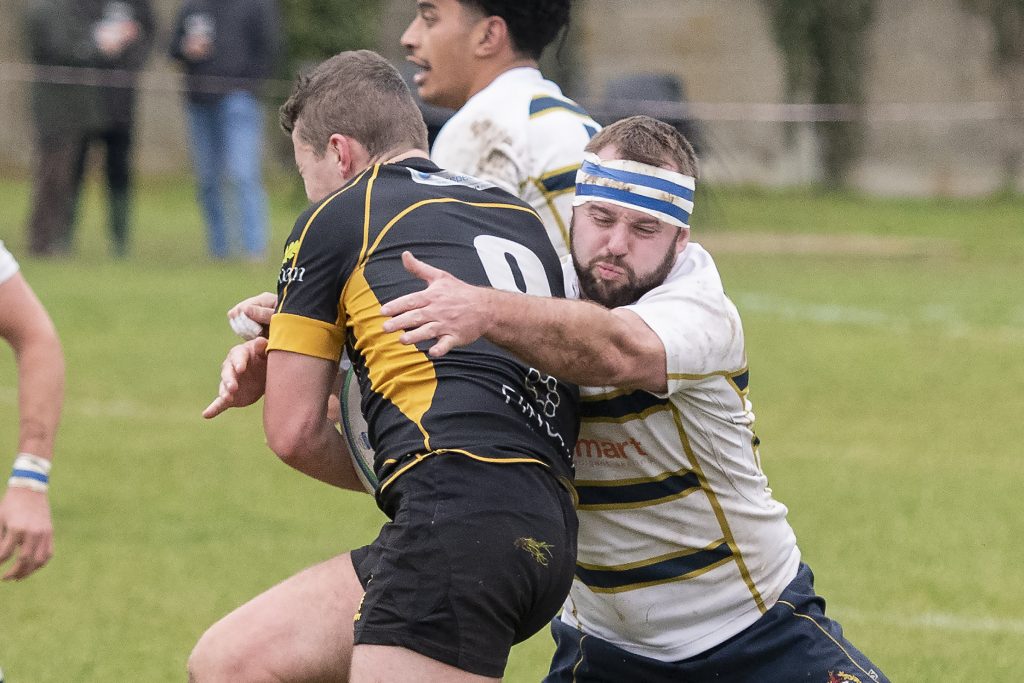 After last week’s drawn local derby against Sevenoaks, Tunbridge Wells were on the road to Hertfordshire to play a Tring side who have been one of the most consistent teams in this league in recent years. The Dorian Williams Sports Ground has not been a very happy hunting ground for the men from Kent but with the hosts languishing in 11th this season there were high hopes of a more positive return on this visit.

For the first time in what seems like a very long autumn this was a fine Saturday weather-wise and with no wind and dry ground there could be no excuses based on the conditions. The pitch is more or less flat apart from a very pronounced slope into one corner and Wells were defending the “sledging hill” (as our esteemed club photographer described it) in the first half.

Wells were forced into several changes due to injury and work commitments. A debut was given to ex-Brighton scrum half Alex Mason but the rest of the backs remained the same with Harvey Colangelo retaining his wing place after an impressive first cap. In the forwards Carl Straeche came back in at prop following Kamil Wiecaszek’s unfortunate injury and Charley Smith had earned his recall at lock which saw Ben Whale move to flanker. The ever-popular Josh Hawkins returned from his own injury absence as a replacement alongside Chris Brown and these two, together with the third substitute Ollie Allman, were to make a significant contribution from the bench.

It was the home team who were first out of the traps taking advantage of some poor defensive kicks. On 5 minutes Tring secured line-out ball and after a strong rolling maul they found themselves in the Wells 22, and then two more phases of play saw winger Sam Barns cross for a try that was converted by Tom Newton. 7-0.

This poor start did not seem to upset the visitors though.Centre George Montgomery was to have a highly influential game and after a strong carry the ball was moved to outside half Frank Reynolds who kicked to make a good territorial gain. Further pressure soon brought a penalty which Reynolds slotted on 9 minutes.7-3.

The Wells set-piece has been a cause for concern at times but against a much significantly bigger Tring pack this was to be a much improved performance. The front row of Tui Tauaika, Stuart Nicholls and Straeche more than held its own in the scrums and with Tauaika assuming throwing duties the line-out was also a better source of good quality possession. Tring broke through some weak defence (a very rare occurrence to be fair) but Nick Doherty was extremely strong both in his covering tackle and an ensuing carry that brought about a clearing penalty.

Agy Eukaliti had a powerful carry and flanker James Pancaldi showed unexpected kicking skills to gain territory and the pressure built by possession saw a home second row penalised for an illegal clear-out. He also received a yellow card to compound his misdemeanour. The attacking line-out saw clean middle ball secured but it was disappointing when the ball was lost in contact and cleared. However, it did not find touch and Wells were not to be denied. Montgomery took a great line in the counter-attack and was able to release in form winger Max Hobbs into space to score a try virtually under the posts. With Reynolds slotting the conversion Wells now had a lead that they were not to lose. 7-10 on 26 minutes.

A powerful Whale catch and run from the restart reinforced the momentum switch and earned a penalty. Another clean line-out saw good attacking ball and when Montgomery and Hobbs connected again it looked like the winger might bag a brace of tries, only to be denied by a great covering tackle. Skipper Ryan Taylor-Dennehy made a half-break to maintain pressure and when Hobbs was taken out off the ball the penalty was kicked to the corner. Eukaliti, Smith and Nick Doherty drove close to the line only to be denied. However, when the ball was moved wide Colangelo was put into space to dive in at the corner for his first try at this level. The tough conversion was missed but it was now 7-15 on 38 minutes.

Both teams tried to play ambitious rugby throughout and Tring earned another penalty and an attacking line-out deep into injury time. Unlike last week, though, Wells were able to avoid a late score when Eukaliti stole the ball and half time was reached with the score 7-15.

The key questions now were would the Wells front five remain strong against their bigger opponents and would they have the tactical nous to use the slope advantage and see the game out. The answer to both was a resounding “yes” but it also took a herculean defensive effort at times to hold out a very determined home team.

An untidy knock on by Tring from the kick off handed Wells excellent field position, however, realising the importance of the next score the opening 10 minutes of the second period can best be described as frantic. Showing good ambition Tring counter-attacked from deep in their own half after a Wells knock-on, and with the ball going through numerous pairs of hands they went deep into the visitors 22 before scrambling defence earned the men from Kent a scrum just 10 metres from their own line. Although the ball was cleared the home team were still in the ascendancy and when a Reynolds kick was charged down under pressure they earned a penalty for a high tackle. This was directly in front of the posts and Newton slotted it from 30 metres. 10-15 on 51 minutes.

This hosts were on top at this stage as Wells made some errors with poor kicks and imprecise passing. Starved of possession Wells had to re-focus and defend for all their worth. A Tring line-out saw them build through 15 phases before Wells were able to force a knock-on via a big Josh Hawkins tackle, who had now replaced the hard-working Smith. The lock should be pleased with his defensive shift. The ball was cleared but Tring were still camped in Wells territory. Another series of Tring phases moved into double-figures but the Wells defensive line, well marshalled by Whale and Mike Doherty was holding firm. The centre had taken several heavy blows and he was now replaced by Allman on 67 minutes who went to 15 with Taylor-Dennehy moving to centre .

A good Montgomery kick finally released the pressure but sadly despite stealing the line-out ball it was knocked on to give Tring a scrum 30 metres from their own line. This was to prove a crucial moment in the match as the home full back made a scintillating 40 metre break and just as it looked like a try was inevitable it was Colangelo who had covered the ground best to intercept the pass. Superb defensive work. Brown now entered the fray for Pancaldi.

Wells were now playing the slope to their advantage and a raking Montgomery kick saw Tring pinned back and an attacking Wells line-out 7 metres away. The ball was stolen but when Tring were tackled behind their own line the visitors now had an attacking 5 metre scrum. The front row were turning in a great shift (playing the whole 80 minutes) and they produced solid ball. After a series of midfield phases the ball was fed out by Mason and quick hands transferred it to Allman who was lurking on the wing and dived in for the score. An excellent Reynolds conversion from out wide made it 10-22 on 76 minutes.

Tring are a spirited side and attacked again but with the Wells defence now in an even more determined mood they were not to get the losing bonus point. With Allman’s trusty boot added to the kicking armoury the visitors were able to play a sensible territorial game (with two excellent kicks from the replacement) and see time out for the win.

Against a very physical side this was a result that could have gone the other way. However, significant progress is evident from this time last season when games such as this were all too often lost and Simon Whatling’s men should be very proud of this performance. Their ambition with ball in hand is invigorating and when it is coupled with such a herculean defensive effort then there is much to applaud in the work of the men from St Marks.

Wells Second XV also travelled to Tring and it was heartening to see popular centre Matt Spicer score a try on his return (converted by Lucas Scully) in a 35-7 defeat. The Third XV played at Gravesend and were unfortunate to lose 26-22 on the last play of the game despite tries from Simon Waymont, Rob Mitchell, skipper Andrew Cunningham and Nick Baldock. Jack Beaman slotted one conversion.

Elsewhere in the LeagueWimbledon stretched their lead to six points (sitting on 49) after a 41-24 home win over an apparently resurgent Brighton, who picked up the try bonus point. The gap back to the pursuers was increased by CS Stags’ stunning 26-27 win at Rochford Hundred. The Essex club are on 43 points but have slipped to third, on games won, after Guernsey joined them via a hard-fought 29-34 bonus-point win at Bedford Athletic (Wells’ next opponents). Hertford seem to have put their recent blip behind them with a convincing 7-31 win at Sidcup, which has taken them to 31 points. We remain fifth on 29, ahead of Dorking who moved to 26 points after an emphatic 21-55 “derby” win at Guildford. Sevenoaks took the honours at a muddy Knole Paddock with a 27-17 victory over London Irish Wild Geese to also move to 26. Sidcup slip to 8th on 25 and there is now a nine point gap to Bedford Athletic and CS Stags on 16. The Wild Geese and Tring come next on 14 ahead of Brighton on 10 and Guildford on 7.

The bottom two meet next week which is already looking like a “must win” game for both sides whilst 4th versus 1st (Hertford v Wimbledon) is another notable game. It will also be interesting to see how resilient Rochford will prove to be as they travel to Dorking’s Kiln Field, never an easy place to go to.