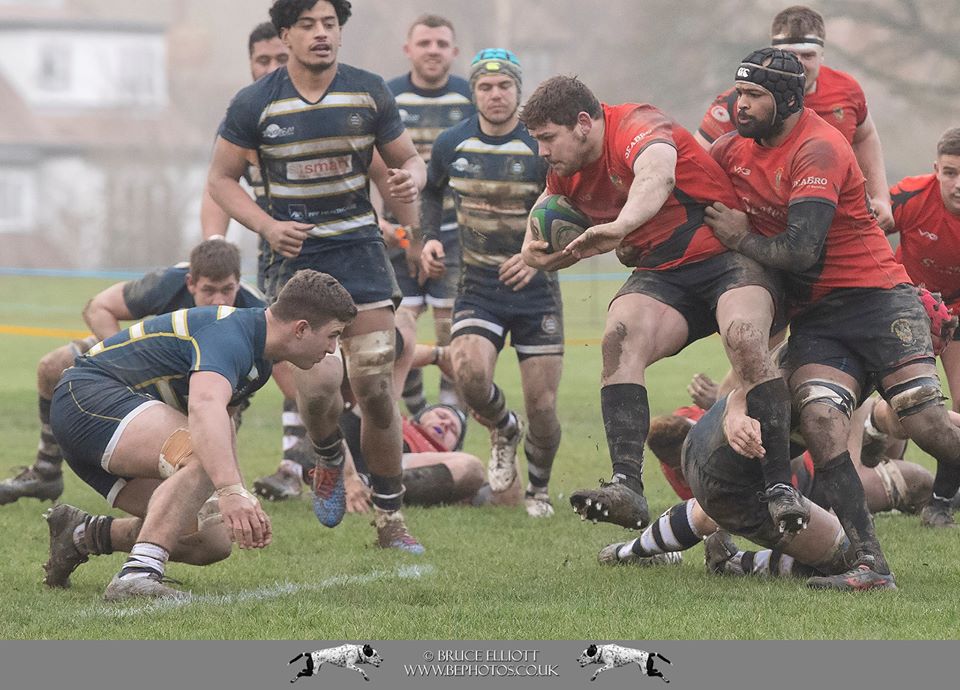 Wells started this home game back on grass at St Marks facing the league leaders after a tough three weeks against top sides, and having been forced to change their front row with Carl Straeche injured and Stuart Nicholls and Aston Croall unavailable. Charley Smith moved from second row to prop, Kyle McGarvie started as hooker, Mike Hathaway and Rich Murray returned and Duncan Hales, Jake Smith and Richard Webster formed a new bench.

Both sides completed the first quarter of this game without being able to dent their respective defences with possession fairly even and most of the play in midfield. The Wells set scrummage stood up well and the back row of Doherty, Hathaway and Pancaldi did enough to secure ball in the turnover. It took until the 27th minute for Wells to get on the scoreboard with a simple penalty which a number of touch line pundits thought could have been a penalty try.  3-0.

After this period of play Wells had some bright spots in the game with Horne, Murray and Hobbs looking sharp but the large and physical pack from Rochford were enjoying a larger share of the ball. It said much for Wells’ team defence that despite pressure it took until the 36th minute for this to be translated into points as Wells dropped the ball behind their line and Rochford 8 Hudson got the touch down 3-5.

Rochford continued to apply pressure and Wells were punished for this indiscipline as first Smith and then Hawkins were sent to the sin bin and Wells were down to 13 as halftime approached. Surprisingly this didn’t seem to hinder their game in attack at all because as injury time beckoned skipper Ryan Taylor- Dennehy pick the ball off his toes from a loose kick and initiated a great run and spinning break to find Mike Doherty on his shoulder to finish off a 45 metre move for the try and to finish the half down in numbers but 8-5 in the lead. A lead they just deserved as Rochford finished a half in which they never seemed to get going.

Wells started the second half back to 14 but faced a different Rochford side who had received an audible roasting from their coach during the interval. They had a simple  and limited game plan which was to use their physicality and maul and drive to the line.

Wells could gain little ball at this juncture and Rochford camped in their half. Further valiant defence could not prevent a succession of mauls from penalties to the corner seeing an early score as the maul rolled over the home line for a try to Rochford hooker Ferrier on 48 minutes 8-12 with a Greenhall conversion.

Wells now back to full numbers had brighter moments with Eukaliti, Hathaway, Doherty and Hawkins punching some midfield holes. This got the home side closer to the Rochford try line and on 50 minutes Reynolds got the scores within a point with a penalty 11-12. This was followed by a Horne break with Reynolds in support but Hathaway couldn’t hold the final pass.

Pressure then began to tell again as Wells lost all line out precision and with it the opportunity to keep possession which was then added to by the loss of scrum half Eddie Croft to a third yellow card of the game on 57 minutes. Despite these handicaps Wells kept Rochford out until the 63rd minute when a succession of bravely defended pick and drives finally brought success to Rochford as Wells were sucked in and the ball was moved swiftly to left wing Meads for a try in the corner 11-17.

The last 10 minutes of the game approached with Wells still having a say in the game and with a chance of at least a losing bonus point but Rochford pack pressure continued and with some inaccurate attempts at touch kicks from the Wells their task was aided. Rochford yet again camped on the Wells line and patiently picked and drove which despite further valiant defence ultimately saw Rochford’s very well built 6 Duaibe score the try 11-22.

Wells with their usual spirit roared back and had a good go at getting something out of the game. In injury time Rochford’s 5 Shields was sent to the bin but this was too late to help the cause and the final whistle blew with the home side on the Rochford 22.

This was a spirited performance from a Wells side that is still capable – once the squad is returned to full strength – of a top 6 place in this their third season in this league.

Discipline and line out technique cost them in this game but the work of a makeshift front row, the return of Mike Hathaway and a promising performance off the bench from Duncan Hales are all cause for optimism as the side look forward to their game against London Irish Wild Geese at Sudbury this Saturday KO 2 30pm.

It’s a case of “as you were” at the top with the three leading sides all gaining bonus point wins. Rochford Hundred’s victory at St Marks moved them on to 80 points ahead of Guernsey on 78, after the Channel Islanders laboured to a 29-19 win over our next opponents, London Irish Wild Geese, having been behind twice. Wimbledon stayed hot on their respective heels on 75 points (with their game in hand against us in March) after a comfortable 42-19 win over Sidcup.

Dorking’s strong form since beating us in December (they have now won four in a row after seeing off Tring 38-22) sees them climb to 4th but they are a whopping 26 points off Wimbledon. They leapfrog  Hertford and Sevenoaks who will have both been disappointed at their losses – 25-27 to CS Stags and 12-8 at Brighton respectively. 7th, 8th and 9th remain exactly the same as none of us, Sidcup nor Tring picked up any points so stay on 42, 39 and 34 points respectively. However, it is certainly getting much tighter down below. Brighton’s resurgence continues and sees them up to 10th on 31 points after winning their arm wrestle against the Oaks, where they are joined by CS Stags. The Chiswick-based team earn pride of place for their bonus point victory at Hertford. Having pulled off a shock win at Rochford earlier in the campaign, this is another notable scalp for the Stags and shows that no one apart from the top three sides can rest on their laurels if they do not want to be pulled back towards the relegation battle. The Wild Geese sit 12th on 27th, ahead of Bedford Athletic on 24 and Guildford on 20 after the Surrey team beat Bedford 29-8.

The “big game” next week is clearly in Essex where 1st play 3rd as Rochford Hundred host Wimbledon. Both Sevenoaks and Hertford will be hoping to get swiftly back on track when they meet at Knole Paddock. Guildford, Brighton and the Wild Geese will also go into their games with more optimism now as they take on sides above them at Sidcup, Tring and hosting us respectively.