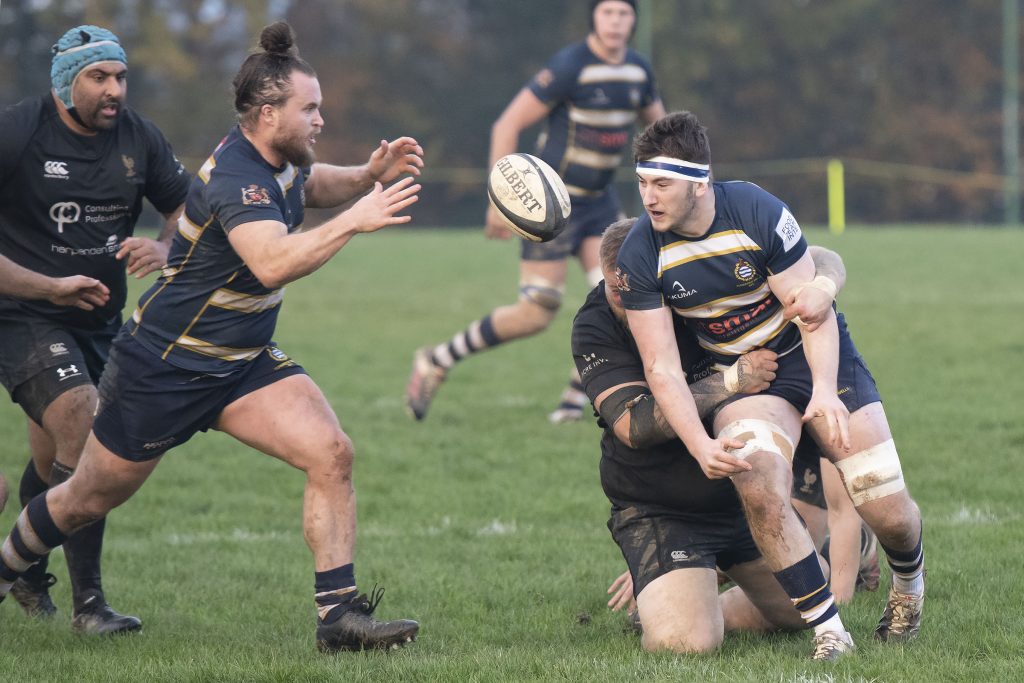 The players lined up to pause and reflect for two-minutes. The observed silence, is then awoken by the proficient Conor Boyle’s shrill blast on the whistle. The game gets underway, Wells kick off facing the clubhouse with a steady breeze behind their backs.

It’s a very close game, with much to and fro. After 13 minutes in, Harpenden are awarded a penalty for Wells not releasing. This results in five minutes of persistent pressure, but Wells defence is resolute. Eventually Wells then clear their lines, and the tables are turned, with a quarter of the match now played.

Thirty-one minutes in, a massive kick from Ed Shepherdson, showing versatility on the wing, lands 5 meters out. The line out is caught by Wells, mauled and expertly driven over the line and touchdown by the Wells blind side, Jono Hinton.

The kick is not converted. Wells lead 5-0.

The next 9 minutes sees Harpenden banging at Tunbridge Wells’ door, but it’s bolted shut and their defence is solid. Eventually, after several Harpenden penalties, Wells managed to get one of their own, and boot the ball out for a well-earned half time rest. Score still 5-0.

Second half starts with colossal pressure from Harpenden, eventually their 11 goes over and dots down in the left-hand corner. Score 5-5 after conversion goes wide.

Wells start, with great pressure from the off and quick tap penalty from George Montgomery, followed by a line out. The ball is caught, driven and again Wells go over for the five points, with the totemic Toby Talbot getting a well-deserved team try.

The game restarts and pretty soon Wells are back on the front foot. They enter the opposition 22, with a nice switch play from left to right and a try lands curtesy of Tom Waghorne. George Montgomery again converts the two, it’s now 19-5

Wells now on the march receive a penalty as Harpenden’s 11 is penalised for ‘coming off his feet’. They opt for a kick to the line, and with a clean catch, get a rolling maul over the whitewash. Jono Hinton dots down for his brace and Wells pull ahead, 24-5, with the conversion missed.

With 15 minutes left of the match, Harpenden provide some never say die attitude and their beefy 6 finally crosses the line. With the conversion kick sailing over, the score is sealed at 24-12

Harpenden now feel they are in the game, and turn up the heat, but again strong tackling from the whole team keeps them at bay. Nick Doherty, deservedly picking up the Man of the Match award from Chapel Down Group, for his efforts. Always leading from the front.

With the light now fading Harpenden still on the attack, but it’s proving increasingly unlikely that they will close the 12-point gap.

The last play of the game, sees Wells kick the ball out from their scrum. Another great day at the office and Wells move up to 4th position in the Regional 1 South East division.