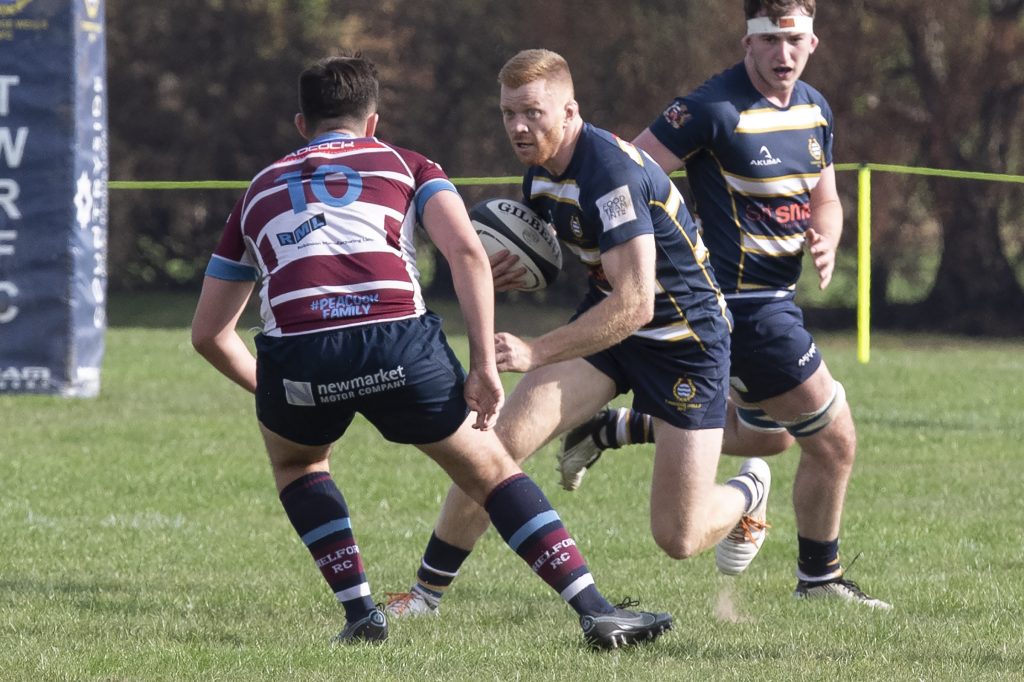 Prior to the Men’s match, the TWRFC Over 18’s Ladies had a ‘friendly’ fixture versus the Uckfield Ladies. They came second; however, it was roundly agreed that it was impressive to see this side of our game growing in stature. As the ladies trundled off the pitch for a well-earned shower, the Wells 1st XV ran past in a team tag, for their first match of the new 22/23 season.

The newly promoted opposition, Shelford, were playing with the sun on their backs and a slight wind behind them. They kicked off to Wells, attacking the club house end.

An early scrum on the edge of Well’s 22, after some intense pressure, created the first opening for the visitors. Wells won their feed, but held on in contact, trying to break away. The Shelford 9, Charlie Baker – did a quick tap and spun the ball from right to left. Their pacey No.11 winger – Louie Tang, dotted down to open up the scoring. The two points were added from the boot of their youthful 13, Jack Biard.

The Well’s scrum had the upper hand in the first half. With a dry, concrete and sand surface underfoot, the opposition loose head, Bradley Robinson, wasn’t picked up for corkscrewing the Wells tight head, John Petty, until the third scrum. Their battle whilst tough, gave the crowd and the referee a long watch across the 80 minutes of play. Trying to stop both packs, ravenously eating up the clock for the whole game, was a challenge.

The game really hadn’t settled, a bit of possession ‘Ping-Pong’ ensued, followed by some bone busting hits from the Wells tight 5. Petty smashing their attack with brutal force. Both teams were really struggling for a foothold.

Wells eventually broke into the opposion’s half, a nice backhanded pass from the newly capped Ed Shepardson at 15, but the Wells winger is bundled into touch. The ensuing line out is won by the Shelford pack, and the ball is hoofed down into the Wells half. Sadly, their own line out is lost and Shelford run it through the hands from left to right and in first phase again, score in the opposite corner from the first try. Touched down by Mike Gillick at 15, with the conversion again by Jack Mikel

Game restarts, but the kick doesn’t make 10. Scrum time. Wells heave and at a rate of knots, win a bullying scrum pen. The fight back begins. With a nice nudge forward, a long kick to the line, gives Wells some territory in the opposition 22. Wells finally touchdown after a couple of campaigns pushing for the line, eventually it’s spun away from the forwards, and the silky Shepardson scores in the right-hand corner.

Wells are looking hungry for more, now in the opposition 22, sadly the nuggety, head strong, Luke Hawkins gets snapped backwards in front on the Shelford sticks, and his leg is stuck in the ground. He is replaced, having only played 3 minutes. Hopefully his injury isn’t as bad as it looked. We pray he recovers soon.

The last play of the first 40, sees Wells take a scrum; the ball is lost and hastily hacked off the pitch as the half time whistle blows.

The second half starts with Shelford kicking off. The expectant crowd, roar both sides on. Shelford continue with more sustained pressure, which eventually comes to an end with a knock-on by their midfield. Wells pounce on the ball – scrum down Wells. They clear their lines just outside the 22. Shelford throw and Wells fully engage, then receive a scrum and slowly edge out of their own half.

The last quarter sees Shelford’s pack getting the upper hand. And finally, after a prolonged period of scrum resets, order is restored. This pressure then presents a points opportunity in front of the posts, as Wells give away a pen. However, the ever-impressive Jack Biard, misses an easy chance and is put back in his box, when his miss is hoofed back down into their half.

Wells are now desperate to take their chance; they steal the next passage of play from Shelford and kick a 50/22. They win the line, receive a pen and charge for the whitewash. Credit to Shelford, whose defence is like a stonewall. With all this pressure, an opposition tackle flies in high. Miles Anderson, replacement hooker​, sees yellow and walks off for a 10-minute rest. Well’s now in a very kickable range, take the 3.

The game starts to slowly fade away from Wells, they just can’t break through. And can’t take advantage of the extra man. The Shelford yellow card comes back on. The last lineout is won, and the ball is kicked off. The whistle blows. And the teams huddle.

A tight game, played out by some standout talent in both teams, with some pleasant and friendly traveling support. Arguably Shelford did enough to secure the points. We look forward to seeing them again, for the last game of the Season in March!

Next week sees our first Away fixture of the season at Hertford RFC – Saturday 10th, 3pm k.o. All travelling support welcomed.