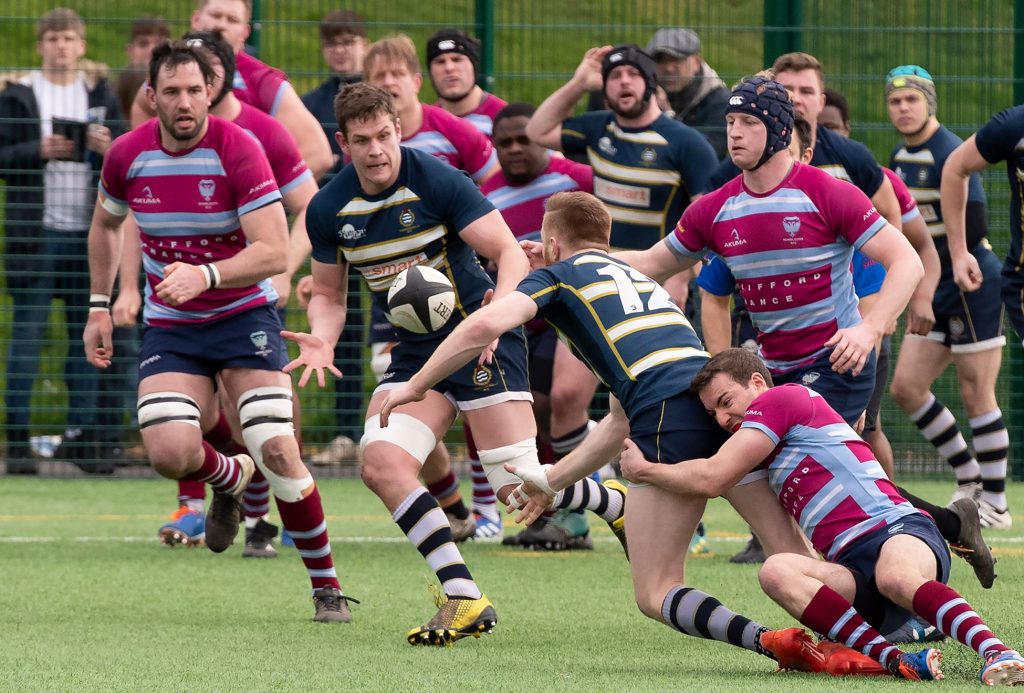 This was a rearranged game from earlier in the season which was switched from St Marks to Bennett Memorial School’s AGP after a pitch inspection by the referee and the two captains at 1 00 pm.
Wells found themselves without successful right wing Max Hobbs after three minutes with Eddie Croft replacing him on the wing and Charlie Rigby coming off the bench to play at scrum half.
These changes can be added to changes in the front row and back row from the team who last week played so well against CS 1863.

The first few minutes of the half set the pattern for the next 40 minutes with the visitors in 3rd place in the league demonstrating almost complete scrum dominance and the Wells- currently 7th showing that they had some dangerous backs. With Wimbledon not finding their touches adding to the ball available for Wells to counter attack from deep.
The Don’s were first on the scoresheet after 13 minutes when an electric break from scrum half Ben Newman saw centre Jack Reville in under the posts for James Moffat to convert. 0-7.
The Don’s were a man down on 15 mins as No 8 Chris York was yellow carded for an offence on the floor. Wells enjoyed plentiful possession and were unlucky not to score after a brilliant handling move initiated by the Doherty brothers carried on by Ryan Taylor Dennehy and involving 10 players in all. The home side did not have to wait long though as on 24 minutes the improbable figure of the Wells hooker Stuart Nicholls popped up on the right wing to score an unconverted try 5-7.
As the half approached it’s end Mike Hathaway made a great break up the middle only for the ball to be spilled, Ben Whales was yellow carded and then a Don’s player followed him for a head high tackle on Taylor Dennehy which could have been more.
Wells continued to attack and Matt Spicer was adjudged held up in the tackle over the Don’s line on 43 minutes before Wells got the ball wide again on the right to Eddie Croft who got the ball down for an unconverted try and a Wells halftime lead of 10-7.

If Wimbledon were to win and keep pressure on the top two sides their game needed to be tightened and they needed to be more accurate with their kicking in the second half.
Sadly for Wells their second half form was much better with more aggressive defence and if possible even more scrum dominance. Nick Doherty was off to be replaced by Josh Hawkins within a minute of the restart and Don’s regained the lead on 44 minutes as Reville scored his second after a switch in midfield to score under the posts with Moffatt adding the extras 10-14.
During the first 20 minutes of the half Wells could retain little possession as they conceded a number of scrum penalties. On 50 minutes impressive Don’s 6 Kane Albani broke up the middle  and fed No 4 Jack Cooke for try 3 which was unconverted 10-19.

In the last 20 minutes Wells struggled in both the scrum and in accuracy at the line out as the Don’s squeezed the life out of the home side with further tries from a high possession rate from 15 Blane Wilson again through the middle and under the posts on 62 minutes 10-26, by effective hooker Ugo Ogodulunwa on 78 mins 10-33 and by probably Man of the Match Kane Alboni on 83 minutes and Moffatt adding his 5th conversion. To make the final score 10-40.

Wells had a good first half but could not live with the aggressive defence and set piece mastery of the visitors in the second half. They will have to bring a full 80 minutes of precision and a rethink on scrum technique before the replay in South London in a few weeks time depending on whether the London and SE Premier season is still running.