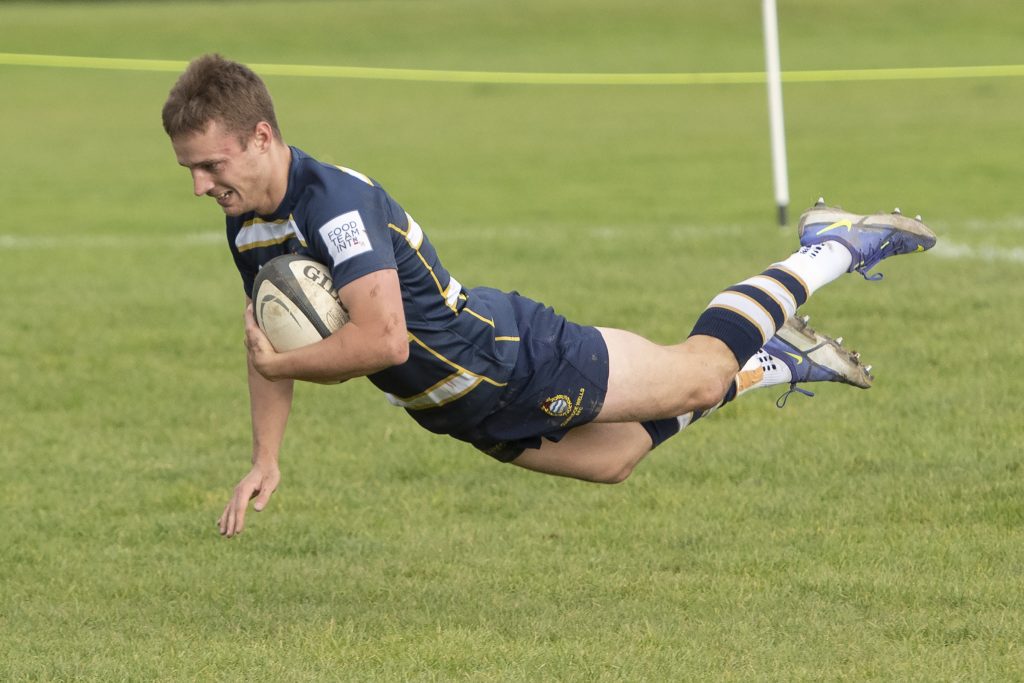 Wells kicked off up the hill and aided by three consecutive penalties against the visitors found themselves in the corner courtesy of a very precise kick from George Montgomery. Ben Mutch and his jumpers secured the ball and rolled the maul for Toby Talbot to get the try and George Montgomery the conversion after 2 minutes. 7-0.

Aided by wasteful kicking from Sidcup, skipper Mike Doherty was able over the next few minutes from his new position at fullback, to launch a number of counter attacks which culminated after 6 minutes with Doherty launching scrum half Finlay White to score Wells second try and give them a lead of 12-0.

When Sidcup retained possession and did not kick it away they saw some time in the Wells half and scrum half Munton kicked a simple penalty after 10 minutes 12-3.

Wells by this time were dominating the line out and achieving parity in the scrums and with Montgomery bossing the tactics with some astute kicks and prompting runs Wells were able to play an expansive game as a Montgomery penalty was added to the score on 21 minutes.

A rare handling error in the Wells centre then gave Sidcup some hope as No 8  Jon West put hooker Hopkins in for the try after seizing on the loose ball.  Munton converting to see Sidcup back in the game at 15-10.

Wells upped the pace of the game after this score and with some very precise passing and Montgomery’s tactical boot were able to take the game away from Sidcup as Montgomery himself weaved through on 36 minutes to score and convert his own try 22-10 and for Wells to be rewarded as halftime approached with the Doherty brothers carving space in midfield to create a gap for Finlay White as he went through for his second try of the afternoon converted by Montgomery for a half time lead of 29-10.

Playing down the slope in the second half Wells should have added to their score as they passed to the opposition in the right corner with the line at their mercy but the home side continued to apply pressure as the pack and particularly the tight forwards applied themselves to aggressive tackling to secure a succession of knock forwards in the tackle which continued to give the side copious ball to move wide.

On 44 minutes right wing Jack Smith sped down the touch line to score taking advantage of 14 man Sidcup’s defensive disadvantage after a yellow card. Montgomery again converted with pinpoint accuracy 36-10 and a try bonus point in the bag. Within 2 minutes with the ball spread quickly and accurately to the left wing this time Max Hobbs weaved and sidestepped over for Montgomery to convert from the touchline 43-10.

Sidcup having determined that kicking the ball away was a bad tactic put in a sequence of passing movements in midfield and on 50 minute pulled 7 points back as they drove through the middle 43-17. This if anything encourage Wells to play even more open and fast Rugby as  Mike Doherty powered over on 65 minutes with Montgomery converting and with Jack Smith scoring his second after a scorching run on 68 minutes for the 8th Wells try of the afternoon and Montgomery helping himself to a sixth conversion to round off the final score at 55 -17.

This was a very good afternoon for the Wells side as they started to demonstrate their potential. 6 tries for the backs illustrated the pattern of play as Ben Mutch and his second rows – Jonno Hinton and Harrison Chapman- provided a seamless supply of line out ball to provide a platform as Montgomery and White at half back prompted from the boot and in hand.

Sidcup never gave up but couldn’t cope with the Wells pace and accuracy of handling which if it can be consistently reproduced bodes well for the rest of the season. The side now takes a well- earned rest week before visiting Sudbury in a fortnights time and Simon Jervis and his coaching team can take heart at the move up the league table as a result of their hard work during the week on the training ground.