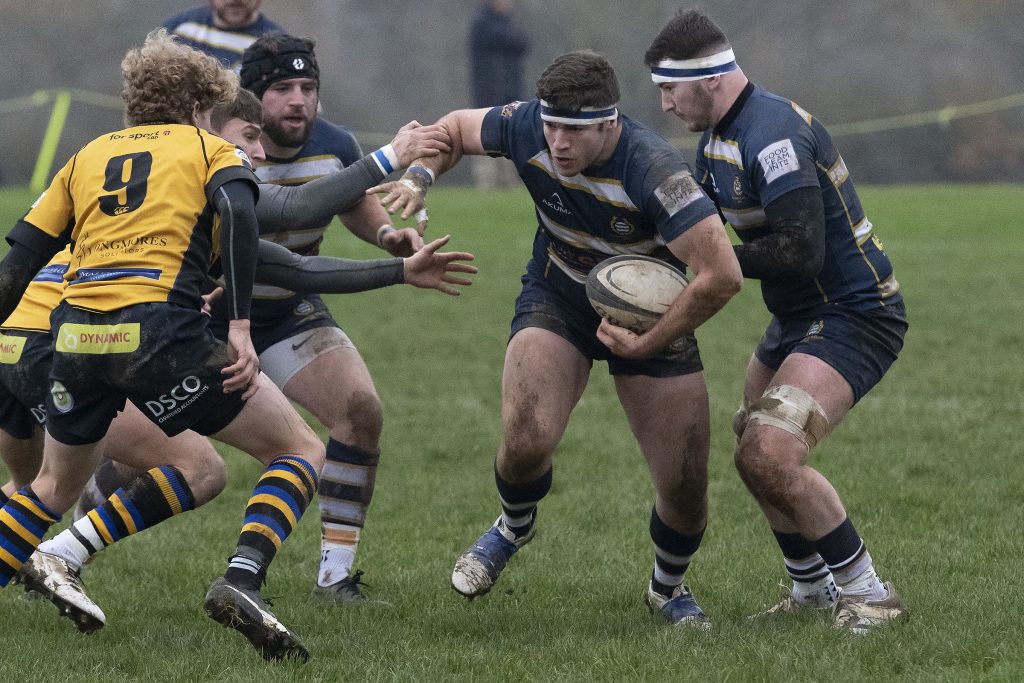 It was a damp, relatively cold Saturday afternoon with a mild wind coming from the east and across the pitch. The first 10-15 minutes was an untidy and scrappy start with the referee trying to decide the reasons for awarding and resetting scrums. Losing patience he penalised the TW front row for the first kicking opportunity of the half. 35 metres out on the right hand side was found to be too difficult and the kick was pulled into the wind and comfortably missed the right post.
The remainder of the first half was predominantly played in the Hertford half with TW applying pressure with some accurate kicking by George Montgomery who 3 times hit touch 5 metres from the Hertford line. Twice the line out was won taken forward to with inches of the Hertford line but adjudged to be lost in contact or held up and Hertford scrums on their own 5 metres were awarded penalties for various different reasons – Ben Mutch, the hooker and captain on the day, worked hard with the referee to understand the breaches.
On 2 occasions TW had excellent chances to score, firstly after a clean take from Harrison Chapman, moved to the centre and creation of second and 3rd phases and then quick hands to the left wing, Max Hobbs, to go over only for the last pass to be given as forward. The second chance was after huge pressure to the Hertford line with Charley Smith hitting a fantastic line and brushing the first tackle aside and straight over a defender before the the last man standing in the way played the ball on the floor for a TW penalty just 5 metre out. George Montgomery tapped and was immediately tackled from feet away and the play was deemed to have been held up over the Hertford line. The Hertford centre was shown a Yellow card but the penalty try did not seem to be considered. John Petty came off with injured (ribs) and Jake Thompson came off the bench allowing Charley Smith to move to prop. After 2 further TW penalties and scrummages within 5 metres of the line TW were penalised at the set piece and the half was ended 0-0.
The second half saw the same number of penalties awarded and both sides were becoming very frustrated. Hertford were frequently kicking straight into touch from hand by not factoring the wind but hitting touch from the penalty kicks to pressure the TW 22. After 10 minutes within the TW 22 the first points went to Hertford,0-3, after an offside right in front of the posts 10 metres out. As part of that play Max Douch was yellow carded for a high tackle out wide on the left hand side.
TW brought on the rest of the bench with FIn White replacing Sam Seymour and Luke Hawkins replacing Ben Mutch. In the TW 22 a Hertford player had deemed to have committed an offence worthy of a YC and pressure was relieved. 3 consecutive penalties saw a line out 10 metres from Hertford line, good line out and move to the halves channels drew another penalty to TW. George Montgomery saw the opportunity, tapped and went over at mid point between posts and touchline – extra point duly taken 07-03 TW.
With both sides favouring the kicking game this played into TW’s hands as they won many yards with a better kick/chase game and also threatened the Hertford line before being called back for an offside.
With 10 minutes remaining TW found themselves pressing for some comfort and another score. From good second phase ball George Montgomery chipped over the rushing defence, regathered and scored the try to the right 20 metres from the touch line – another conversion and the score moved to 14-03.
The last 7 minutes saw Hertford attacking to try and get something, even a losing bonus point, from this game. Charley Smith was given a yellow card for an over aggressive tackle and the Hertford winger also saw yellow after some misdemeanours on the floor in the fading light.
It wasn’t a flowing game at all and with continual stoppages it was a tense and frustrating game. The result was the right one on the day as the TW defence was immense and their kicking game was superior. TW remain in 4th place and look forward to CS Stags away next week with the league leaders Westcombe Park at home on the 17th.