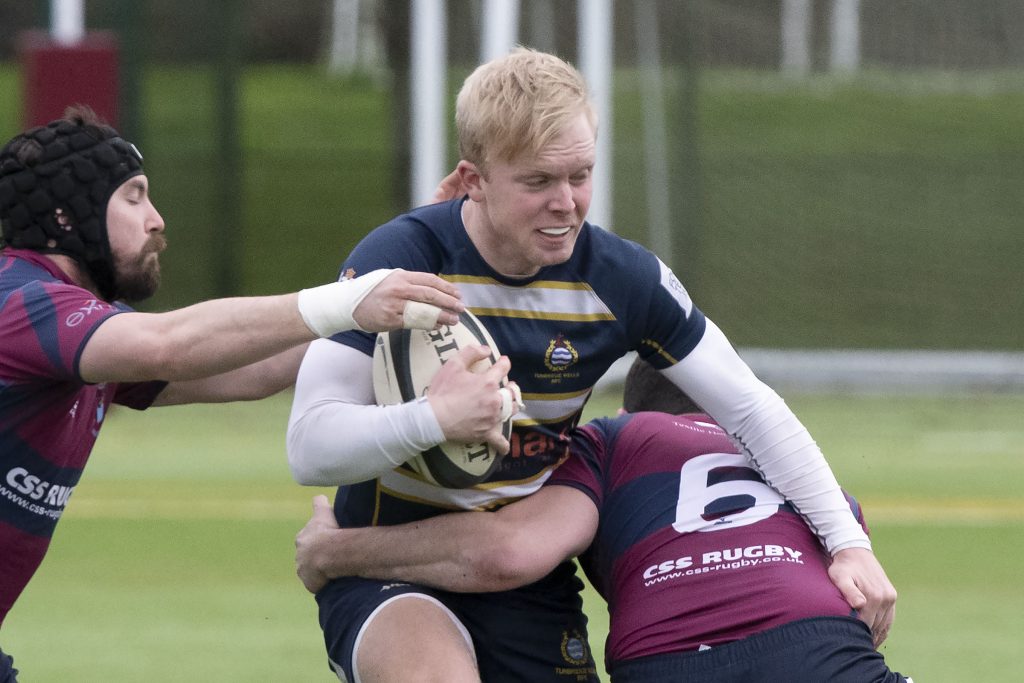 With the pitches at St Marks unplayable Saturdays game against Sudbury was switched to the 4G at Boys Grammar and a good crowd turned up to watch Wells first home game of 2023.
The opening exchanges saw Wells show early promise with ball in hand and a penalty to the corner after 4 minutes put Wells in prime position for an early score. Sadly the ball was overthrown and Sudbury attacked from deep showing they threat the possessed.
With the rain having stopped this was going to be a quick game on the artificial surface and it was a good bounce off a line out that saw the Sudbury 8 go clean through unopposed to score under the posts – with the 10 converting for a 0 – 7 lead. Wells came straight back with Nick Doherty charging upfield. Sudbury were penalised and Monty took the 3 to reduce the gap after 15 minutes.
The next 15 minutes was all about defence, with Wells defending their line as the visitors looked to add to their lead. Jason Lord was at the heart of the defensive effort putting in some huge hits. An injury to skipper Mike Doherty saw a break in play of 5 minutes and time to catch their breath. This seemed to energise the home side and the next 10 were all Wells. Attack after attack hit a wall of Sudbury defence but they started to infringe and it wasn’t long before a yellow was issued. Wells opted for the scrum but it didn’t go to plan and Sudbury cleared. Wells came back, picking and driving closer to the line and with it more penalties against Sudbury. It was the last play of the game when Wells finally got reward for their efforts and a quick tap penalty was sent out wide to Max Hobbs who got over in the corner. Monty slotted a great conversion and Wells went in 10-7 at half time.

With Sudbury still down to 14 men Wells attacked from the off as the second half started, 5 minutes of possession as Wells used the pick and drive again eventually scrum half Finn White saw a gap and sped over the line – Monty converted and Wells extended their lead to 17-7. It was all Wells at this stage and Wells came so close to another score as Monty found some space but the last pass went to ground and Sudbury cleared. Then against the run of play Sudbury found some space and their hard running 8 and 12 created space for a fine try converted to reduce the Wells lead to 17-14. Sudbury were now in the ascendency and everything was going their way with their 8 at the centre of everything. It wasn’t long before they took the lead with another try as Wells ran out of defenders. The conversion went over and Sudbury had the lead 17-21. They looked a different side to what we had seen for most of the game and nothing was going right for Wells. Great defence held up what looked a certain try for Sudbury and Wells cleared. Sadly Wells line out was not functioning as it should and some key positions were lost.

With 10 to go both sides attacked at every opportunity but Wells could not find that magic touch to grab a victory at the death. Sudbury held on and were good for their victory. Wells will feel this was one that slipped away with the chances they had. They rebuild for the Kent Derby match against Medway away on 21st Jan – 2pm KO. MOM for Sudbury was 8 H Cowling with their 12 J Summer a close second. For Wells Finn White took the mom award.