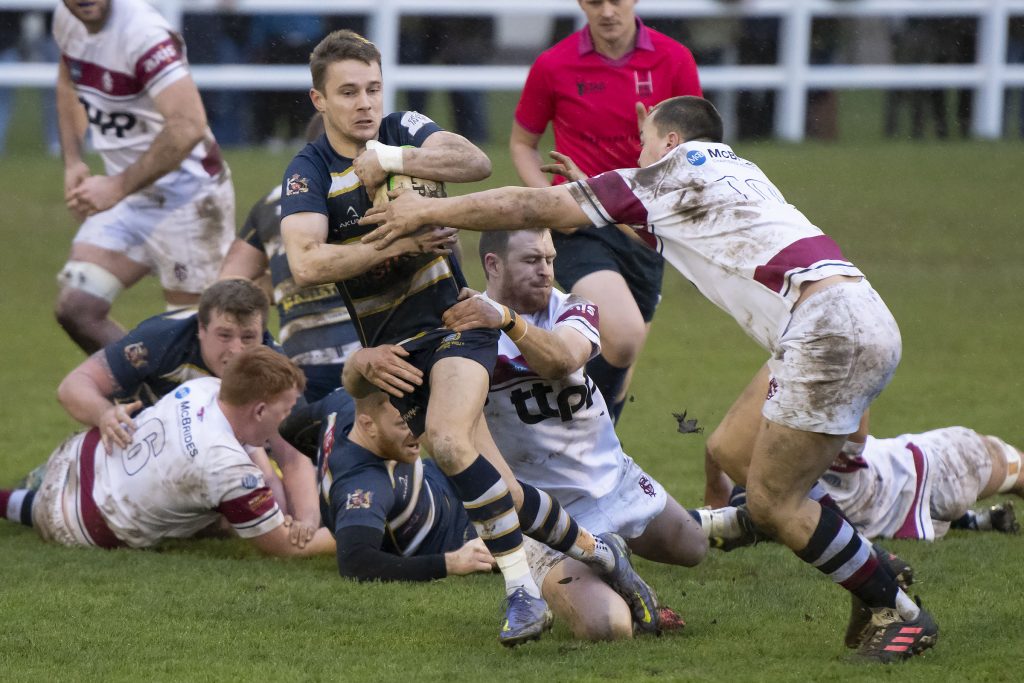 A small post-Christmas crowd gathered at Sidcup for a match that was on the surface, always going to be a grubby and greasy affair.

Wells, with the wind in their faces and javelin rain darting down by the bucket load, started the half with their backs to the opposition club house. Sidcup were up for revenge from their earlier season thumping.

With very difficult conditions, the teams were evenly matched and both needed a solid set of kicking skills and ball handling.

The first try was handed to Sidcup. A retiring Harrison Chapman, the totem Wells no5, caught the ball in an offside position, so was carded in the Wells 22. Sidcup then pressured. And then playing with a penalty advantage, crashed over for the first try. The conversion was missed, which was no surprise given the wind. Score 5-0.

Wells retaliated and followed with some hard yards, then started to make some headway up the field.

Sadly, with 10 minutes left of the half, the Wells 6, Jono Hilton, went off as a precaution, having hit the deck hard. Replaced by Charley Smith. The last action from came from the Sidcup boot, with 3 points kicked. The half ended 8-0.

At this point the general mood and prediction (within the Wells stalwart supporters) was that they had done enough facing the storm. And with the new change of direction and elements they knew they would turn the tide.

As with such wishful foresight, the second half started, and the wind and rain had subsided, along with the Wells’s potential added advantage.

Then with 13 minutes played, after much pressure, The ‘Cup’ come off their feet. It’s the home sides time to see yellow and the offender seeks cover allowing them to dry off in the bin!

The penalty is once again straight through the sticks, by Montgomery.

The next 20 minutes brings heavy pressure from Sidcup on the Tunbridge Wells line.

Eventually Sidcup get over for the five points on the left hand side of the pitch.

With their try converted, the score is now 15-6.
With the clock ticking down, there is time for an attempted drop goal from Montgomery, but the kick goes agonisingly close.

Wells then kick three (now 15-9) but this is then cancelled out with a penalty for Sidcup. They get their 3 and with minutes left, both sides settle for an 18-9 ending.

Next week, Wells play home to Sudbury (at their St Marks ground), who shouldn’t be underestimated.

Once again the elements look to play a key role in the shape and style of output. Predictions of an ‘up the jumper’ as opposed to the ‘fast and wide’ approach. May not suit them, but as we know, not every prediction goes to plan!