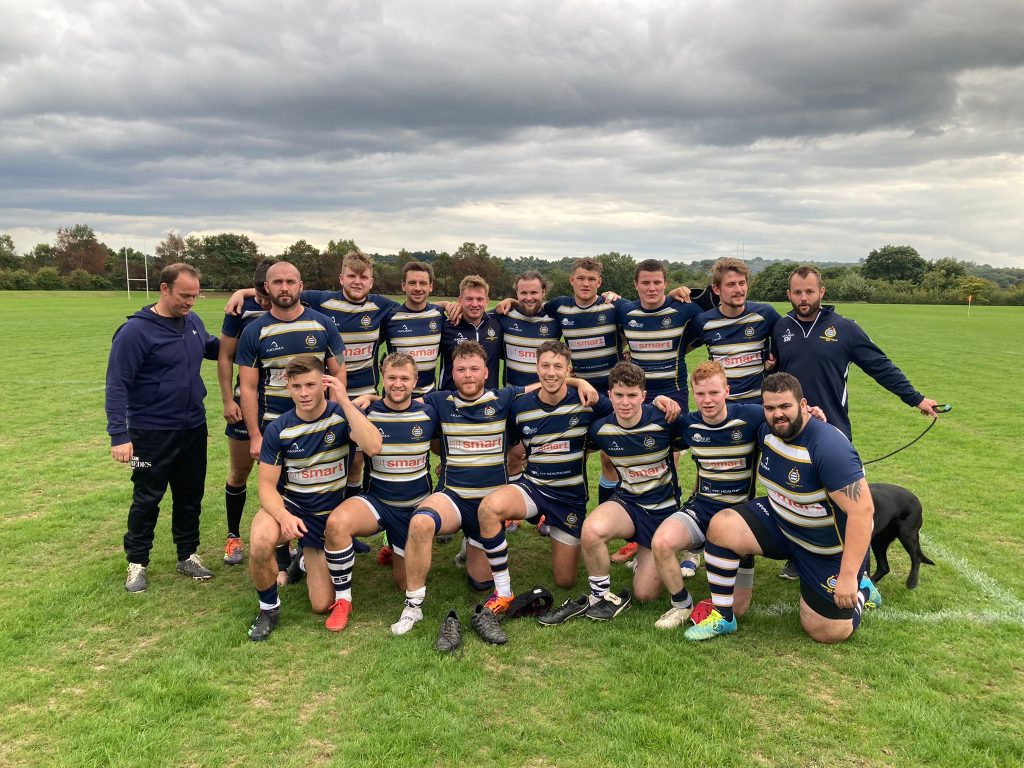 We were to have a fast and furious start as within 5 minutes we had already seen three penalties for TWRFC and a beautifully worked try. The Wells were using their strong ball carriers Brockman, Webb and Daniels to punch through the Canterbury defence.The try came from one such run as Brockman broke through the defensive line to release the sparky Inees Woodhouse to run home the first try in front of the posts. The Wells 10, George Spice, was in a hurry so drop kicked the conversion. 7-0 to the home side.

But, if the Wells thought this was going to be an easy afternoon they were sorely mistaken. Within 3 minutes the impressive Ben Waite went over for Canterbury. Freddie Chapman slotting from the 15m line to take the score to 7 all (after only 8 minutes).

Wells continued with the strong carries and even the strong George Spice breaking the line and heading towards the try line. No one was quite sure whether the try was scored except Mr Weller who called held up. But Wells were again looking dominant in the scrum, in the line out and in open play. This meant the penalty count was rising for Canterbury. At one such penalty Brockman went quick and scored in the corner. The conversion looked very challenging, so much so that Spice called for the kicking tee. Well worth the wait as he slotted very impressively. 14-7 to Wells and only 14 minutes gone.

Unfortunately this was again to spark a resurgence from Canterbury as they came back hard to the home side, It required some significant defence and the Wells pack held firm. A particular highlight for the crowd was a huge Webb tackle on the opposition 9 who wore it well. Having been pinned back in their own half for 10 minutes Wells went to the Boot to evacuate. And what a boot it was! Jack Smith took the ball in hand and kicked high and long. He chased his own kick and after the away sides 15 fumbled Smith took him to ground, sprung up and secured possession. The lively Collangelo was on hand to pick up the ball and cover the 3 yards to the try line and score a beautiful try. After two very impressive conversions Spice was in no mans land of the 15m line, he was unsuccessful. 19-7 and still 10 minutes of the first half to play,

Wells came back strong and Hawkins took his impressive defence shift into his attacking game. He ran hard to the line with defenders scattering in all directions. It looked a certain try but the mighty Canterbury 9 managed to hold the huge front row player up. Another goal line drop out which saw Canterbury make good distance. A couple of missed tackles in midfield saw the omnipresent Ben Waite go over again for Canterbury. Chapman missed and we went in at half time at 19-12 to the home side.

Coach Jarrod gathered his men together and imparted some words of wisdom. Jarrod was joined in the coaching by Charlie Rigby and Stu Nichols. It was also great to see other team mates Tom Pithouse, Chris Brown and Avatar on the touchline supporting the boys. The squad look and feel very tight at the moment.

Anyway as the Wells kicked off what we really needed to know was what did the Canterbury coach say at half time. Because they came out a different team. Their scrum became dominant from nowhere and TWRFC were giving away penalty after penalty, many of which were in the red zone. We were lucky to have a referee in Weller who let the came flow as we could easily have been penalised. Wells were defending hard and were under immense pressure. In the end Wells suffered a double whammy when the very impressive Webb went off with a head cut and Brockman saw yellow for a high tackle. This inevitably led to another Canterbury try which was converted to take the scores level at 19-19.

Fortunately the home side found a never say die attitude and went back to their strong ball carriers to punch through the defence. One such move saw Spice make a clean line break where he immediately realised he did not have the legs to make the line, he looked left and same Smith with gas to spare. He was straight over the line, under the posts for Scully to convert. 26-19. When another Penalty came the Wells way they showed good game management bu shooting to go for posts. Unfortunately Scully went wide but his did put pressure on the away side as they failed to clear their line. As Canterbury tried to run out they man into the man mountain Ollie Daniels who put another big tackle in which saw another Wells turnover. Daniels went quick and was over in the corner. A challenging conversion was missed and the score hit 31-19.

That was how the game finished where we saw a second win for the TWRFC 2’s vs a strong Canterbury side and officiated by impressive Michael Weller. A good game with lots of good rugby on show