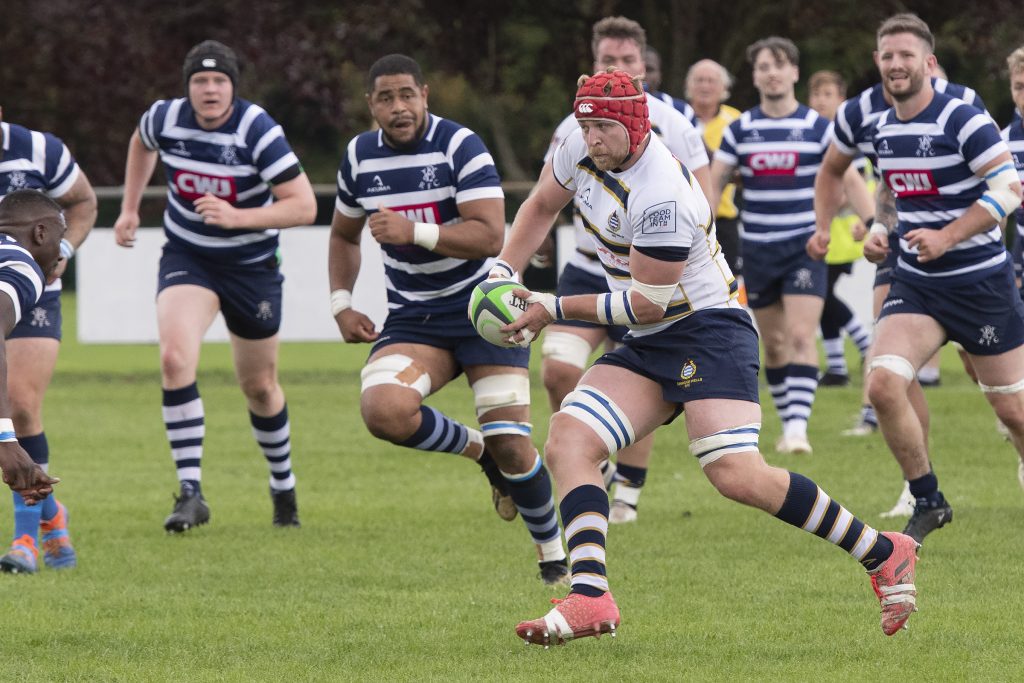 With overcast conditions and a freshening breeze Wells took to the field looking for a response after the previous weeks result. Westcombe Park were at full strength and in confident mood after their unbeaten start to the season.

Combe kicked off with the conditions against them, so Wells needed to make a fast start and get points on the board which they duly did. Straight from the kick receive the forwards burst through the Combe defence but a loose pass ended the move in front of the posts. Wells exerted pressure at the scrum and were awarded a penalty which Montgomery duly converted, 0-3. Combe came back hard at Wells and after a series of forward drives and a quick tap from a penalty their forwards forced over for a try well converted from out wide by Buckley, 7-3.

The game then settled into a rhythm with the Wells back line looking dangerous in open play and the scrum yet Combe dominant in the line out. Wells created several great attacking opportunities due to the fine field kicking of Montgomery and utilising the conditions well but then losing key lineouts in the opponents 22. Wells were however finally rewarded by another Montgomery penalty goal on 26 minutes after WP were penalised for offside, 7-6. Almost straight from the restart another Montgomery kick led to a 50-22 to Wells but the ensuing lineout was again stolen by Combe who managed to clear their lines once more.

Wells continued to pressure the Combe defence but handling errors and turnovers by both sides meant neither side were particularly dominant although Wells continued to have the better attacking positions. The final score of the half was another Montgomery penalty goal which gave Wells a slender 7-9 lead at the break. A great flowing move by the backs was brought to an abrupt halt by deliberate interference from Combe in front of the posts with only the penalty awarded.

The feeling was that if Combe could utilise the conditions as well as Wells had then it could be their opportunity to extend their unbeaten run.

Wells however had different ideas and started the second half as they did apply pressure on the Combe defence. Both sides were trying to play some open rugby but all too often it was punctuated by a poor pass or a knock on. Harrison eventually made a couple of great kicks into the Wells corner and their superior lineout provided the platform for the first score of the second half after 50 minutes when a very fortunate ricochet allowed Orelaja to touch down for an unconverted try, 12-9. Wells were soon back on terms after an eager Combe defence were caught offside, 12-12. However, straight from the kick off Wells were penalised due to blocking off and Combe were clinical with the ensuing penalty. A kick into the 22, lineout secure and drive over the line for an unconverted try 17-12 after 55 minutes.

At this point Combe looked in the ascendency but to their credit Wells came back at Combe and were awarded yet another penalty in front of the posts to enable Montgomery to make it 17-15 on 60 minutes and the referee still showing no signs of any further sanctions due to these continuous infringements.

Wells then came under some sustained pressure in front of their posts and managed to turnover the ball and with quick hands they moved the ball swiftly wide to Hobbs, on the left, who burst past his Radcliff and seemed clear only for an outstretched Combe defenders’ arm to ankle tap him and stop a certain score.

The game was in the balance until the last 5 minutes when Combe scored twice with a push over try and then another lineout drive both converted by Buckley to give a final score line of 31-15 which didn’t reflect the overall nature of the match. Wells will reflect on not being able to convert territory into points but there are plenty of positives to work on during the week to ensure they’ll be well prepared to host Sidcup next weekend.