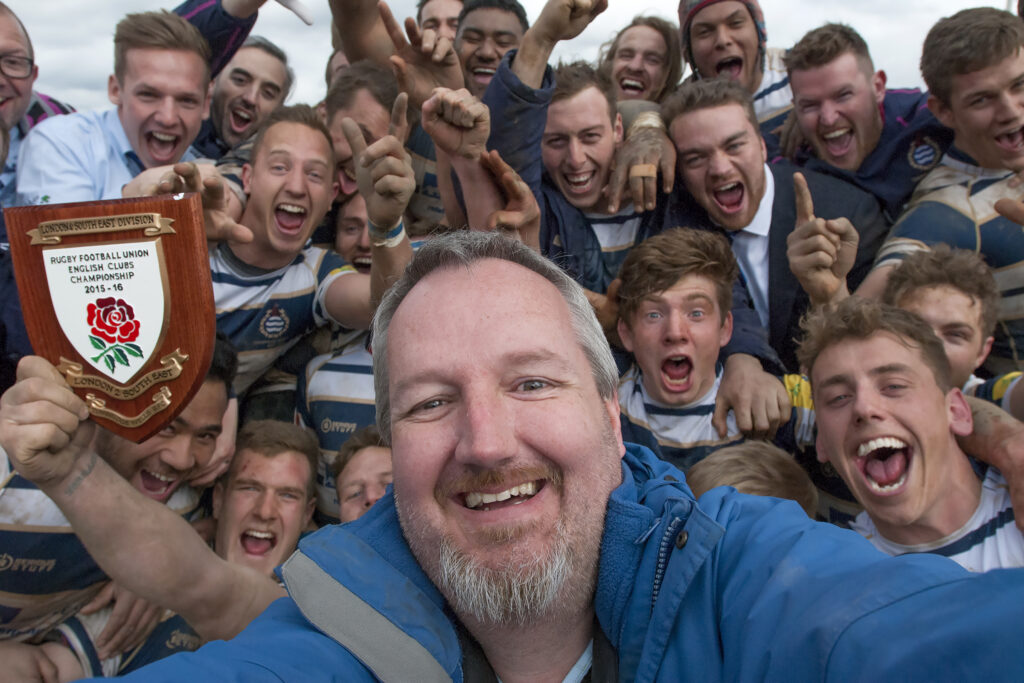 “I grew up in a rugby family. Mum is from North Wales and every Summer from the age of 3 we’d spend time there. There were connections to South Wales on Dad’s side too. Growing up in the 70s it made it a really good time to enjoy watching Internationals with the absolute dominance of the Welsh side. And that was my introduction. There have been a few lean years since but what a decade!

I was fortunate enough to go to Skinners’, but unlike my two older brothers, I wasn’t much of a rugby player. My peak was playing a half for the As at U13 or U14 and never being asked back! So I stuck to being a spectator.

My brothers both played for TWRFC in the 80s. Huw for a short while and Dave for longer. It was probably only a couple of times but I tagged along for a few Saturday evenings to the Hole in the Wall in the High Street back when the Club used to regularly sing and particularly enjoyed the rendition of Banana boat song/Day-o which involved someone running halfway down the high street to call back day-o to the pub. Was there diving off the top of the inside porch into the pub as well? It’s a long time ago.

My direct involvement with the Club really started in 2004 when I bought a digital camera. I quickly became bored of landscapes and portraits and was looking for something else to try. I turned up at the club and Milo was watching the match. Milo’s a good friend of Dave’s and a family friend so I had a quick chat and asked who I should talk to about photography. He pointed me at Roger Clarke and that was that. I’ve been threatening to retire at the end of every season pretty much ever since.

So that’s 16 seasons of photography – 15 and a half looking at the most recent. I haven’t done a proper tot up but something like 300+ matches, and probably around 25,000 images prepped. Promotions, relegations, Twickenham, a truncated season. It’s been an interesting run.

Twickenham was an incredible day for me. I’ve never had to get accreditation for a match before and seeing that other side to the job was fascinating. I’m much happier standing on the side of a muddy pitch following my local side, but it was a great experience, and my 3rd placed match. Only in 3rd primarily because we were too good and it was a bit one-sided. That’s not a bad thing of course.

The Chingford play-off match is my 2nd. Making the play-off was a bit of a surprise to us all with Havant fading in the last few weeks allowing us to pip them by 1 point on the final day of the season. Chingford had a similar set-up pipping Brentwood by a point. I’d photographed our 7s tournament in the morning before heading to Chingford. On the day it was like playing a mirror image of ourselves with both sides having a very imposing and stout defensive line, impressive forwards play creating space for pacey backs to cause damage. It was brutally physical and incredibly close throughout, eventually ending 33-35 after extra time, and gaining us promotion to Level 5 for the first time in the Club’s history. What a way to do it.

But I can’t imagine ever watching another match that was quite as nerve-wracking as Matson. With over 1,000 spectators and a very irritable and physical Matson side the atmosphere was electric. It genuinely could have gone either way for most of the match and with so much on the line… it really should have been the final at Twickenham.

I think we all know I’m not the most sociable of people, but in part that’s why turning up every Saturday is so important to me. I love seeing everyone, saying hello, and then clearing off and hiding behind my camera!

A rugby club isn’t the pitch or the clubhouse. It’s the people that turn up every week because they love the sport and the camaraderie that comes from playing, supporting or volunteering in some way. We’ve got a great club with a lot of amazing people who keep everything running and I’m really grateful to be a small cog in that very big wheel.

Fun session on Sunday. TW Flyerz have been amazing throughout lockdown with weekly Zoom sessions, and now back outdoors. Thanks to brilliant and dedicated volunteer coaches @FlyerzHockey @GBHockey https://twitter.com/twhockeyclub/status/1382028662589984768

TWRFC join the country in mourning the loss of HRH The Prince Phillip, Duke of Edinburgh. A tireless member of the Royal Family but also a loving husband, father, grandfather and great grandfather.