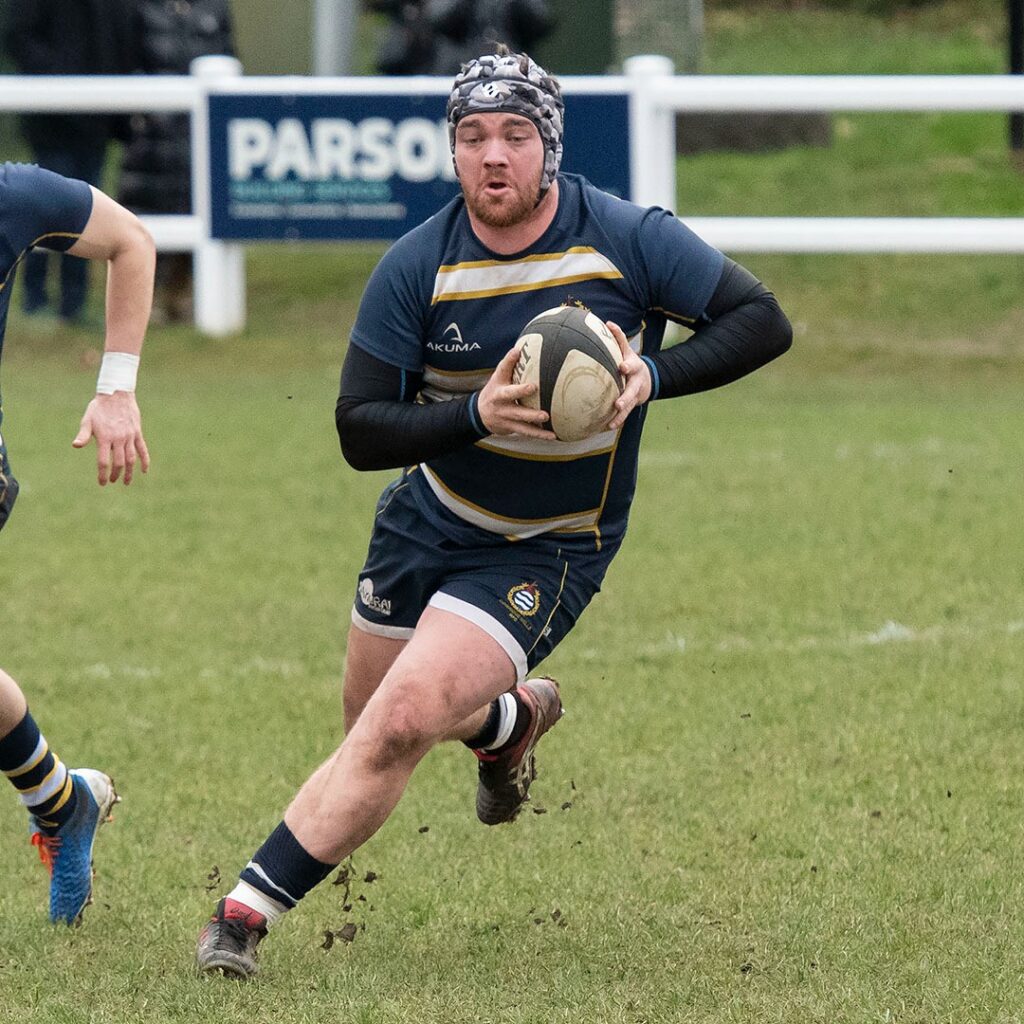 On a slightly overcast day the two sides met at Rugby Lane for the 10th fixture between the two clubs. The previous 9 meetings suggested the home side were the favourites with 6 victories compared to the visitors 3. However, the league standings do not lie and both sides are having a tough season. A thrilling encounter was expected as in the reverse fixture in 2021 only a single point separated them.

As the Wells got the game started they were playing up the hill and early on the game looked remarkably even. Scrums were evenly matched and line outs looked well controlled. Wells had some early success with a well organised line out set play but discipline was causing Wells some set backs. Some early crash balls by Dillon Robertson were looking interesting and encouraging the travelling fans. However, on 18 minutes a Wells error  in midfield gifted the S&E no.8 George Drye a try under the post. Hurley converted for 7-0. Wells needed to set this error behind them and go back to the solid platform they were building. Unfortunately within 2 minutes another Wells error during an attacking phase saw the Wells 9/12 drop the ball to allow Bushnell (13) run straight in beneath the posts. Another Hurley conversion saw the score hit 14-0.

Well did bounce back strong and were starting to look threatening. This started by Webster collecting the Wells kick off and the visitors were starting to cause S&E some challenges.  It was clear to see Webster was up for this game as he was throwing himself about and being a constant threat in defence. This coupled with Spicer getting to the breakdown fast meant Wells Defence was causing the Home side challenges. S&E pivoted their play to some great tactical kicking to grab territory. This did cause a couple of knock on errors for the Wells. However it was clear S&E were feeling the pressure as they attempted to grab 3 points from penalty kick (missed). S&E were clearly feeling the pressure and were trying to add anything to their very fortunate 14-0 lead.

On 35 minutes S&E executed a lovely rolling maul from 15m out and then a swift distribution wide saw them score in the corner (Hurley). The conversion missed 19-0. Again Wells bounced back stronger and looked to be taking the game to S&E. We had 5 strong minutes of pressure for Wells where they were camped on the S&E try line. Sadly after several pick and go’s where the Wells pack were trying to punch through we had a knock on when S&E were relieved to ask the ref to blow for half time.

As the second half kicked off Wells were looking for a swift correction to the scoreline. After 3 minutes we saw a Jack Anderson carry which looked full of intent. It resulted in a knock on and allowed S&E an escape where they reverted to a less expansive game. They pushed on through pick and gos and were gaining yards. After a period of intense pressure the S&E pack got over the line and extended the lead to 24-0. Wells made some substitutions one of which saw Finlay White replace Anderson. White was a very late call up for Mike Doherty who pulled up in warm up. White borrowed some boots from the Chairmans son and took to the pitch.

The changes seemed to have immediate impact with Wells pushing forward and starting to use the kick to better effect. On 55 minutes the Wells pressure at last paid dividends as a grubber kick was collected by Jake Smith in the corner. White missed the conversion (with borrowed boots) and the score stayed at 24-5. Wells were still giving away frequent penalties but were looking much more assured. In fact on 72 minutes Toby Wallace broke the line and committed the full back while releasing Finlay White to score in the corner. Another missed conversion saw the score line start to resemble the game we were watching 24-10, where 14 of the points were gifted to S&E by Wells errors.

With three minutes left, the Wells pressure continued and they were looking very threatening going forward and solid in defence. As another period of strong Wells play ended in a knock on the home side were again relieved to ask the Ref to blow his whistle for full time. 24-10

The score line flatters the home side and Wells represented themselves well. This is a game Tunbridge Wells will feel disappointed to lose, as they again played well but were the victim of costly errors which were well punished by S&E. They will move onto the excitement of a Thursday night game away to Sidcup with added encouragement . Hopefully the lights will inspire Wells to deliver the win they so deserve.