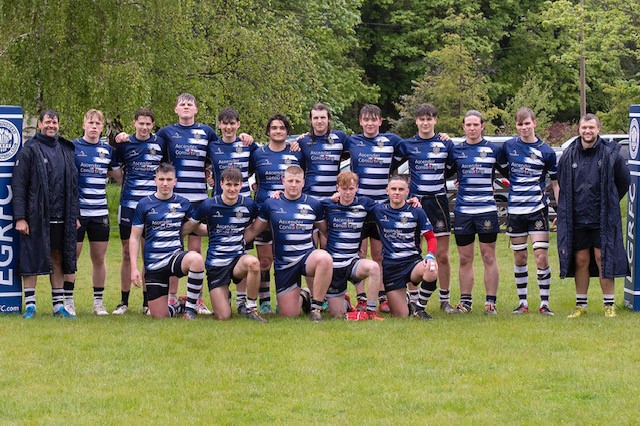 The Academy shows its quality…

It’s been a dreadful year for team sports so all were relived to finally be playing a proper game of rugby, that is of course if you can have a ‘proper’ game of rugby with out scrums and mauls. That said we all just longed for that first game. With the extended season we saw a few players unable to make this initial game due to cricket and exams so with 13 players East Grinstead kindly leant us two players to even up numbers.

As we headed out in the morning we were pleased for a bit of rain to soften up the pitches but by the time we kicked off this had turned into monsoon conditions, it didn’t matter we were on the pitch, ball in hand (most of the time) playing the sport we loved. With over a year from our last game it would be understandable if we looked a little rusty. However the training ground moves were spot on and we executed our patterns to the script. Each time we had possession we had a two or three player overlap, but then the weather had other ideas of any champagne rugby displays. The weather proved to be a great leveller and the team to get on top of the weather would ultimately win the contest. After a couple of forwards moves up the middle of the pitch for Wells with our big ball carriers, Jamie Phillips and Will Hawksfield an opportunity was created with space opening up yet again on the wing, unlike all our other opportunities this time the ball stuck to the hands and in went Gabriel Riordan for the first try of the game. It was a big ask kicking into the rain from the touch line, but we were on the score board at 0-5.

Now we knew our formation worked we just needed to keep plugging away and get the ball through the hands. Before long Innis Woodhouse, at scrum half, had connected with Reinis Zveidris and Jasper Tizzard who opened up the space for Gabriel Riordan to run in his second try taking the score to 0-10. The game was incredibly hard fought by both teams with some incredible tackles, particularly from Quinn McManus, Luca Chowdhury and Calum Scott however our only lapse in concentration came with a rarely missed tackle allowing them to score in the corner and to bring the final score to 5-10

The East Grinstead players played brilliantly and put in a proper shift on the pitch and we know we had two committed players as one of them was overheard calling us The Mighty Wells! And were only too happy to stay with us for our second game against Heathfield.

The rain had eased but with standing water on the pitch it meant conditions were still far from ideal and meant the link play and hands was still not there for either side. For some reason we ditched our prerehearsed plans and decided to carry the ball into traffic and not to utilise our well structured set up and get the ball out to where we had created the space. However we were still putting in some great tackling particularly from Harry Child and we could see where the next opening was going to come from so with a perfect jackal from Max Maywood the ball was carried up field by George Callow before connecting to George Owen who delivers the ball to Gabriel to run in his third try for the day under the posts.

The conversion took an unfortunate rebound off the post but at least we were in the lead and with only 3 ½ minutes to go surely we would be home and safe. But right from the kick off Heathfield challenged and pushed us off the tackle jack-ling the ball and turning it over. We had clearly relaxed too soon and Heathfield rumbled the ball over in the corner to level up the score, was the conversion going to be the decider, fortunately the weather stepped in and settled matters with a very fair 5-5 draw.

Regardless of the score it was great to be back playing rugby with great hosts and opposition.

On the 30th May Tunbridge Wells Academy will be playing their final game of the season at Westcombe Park.