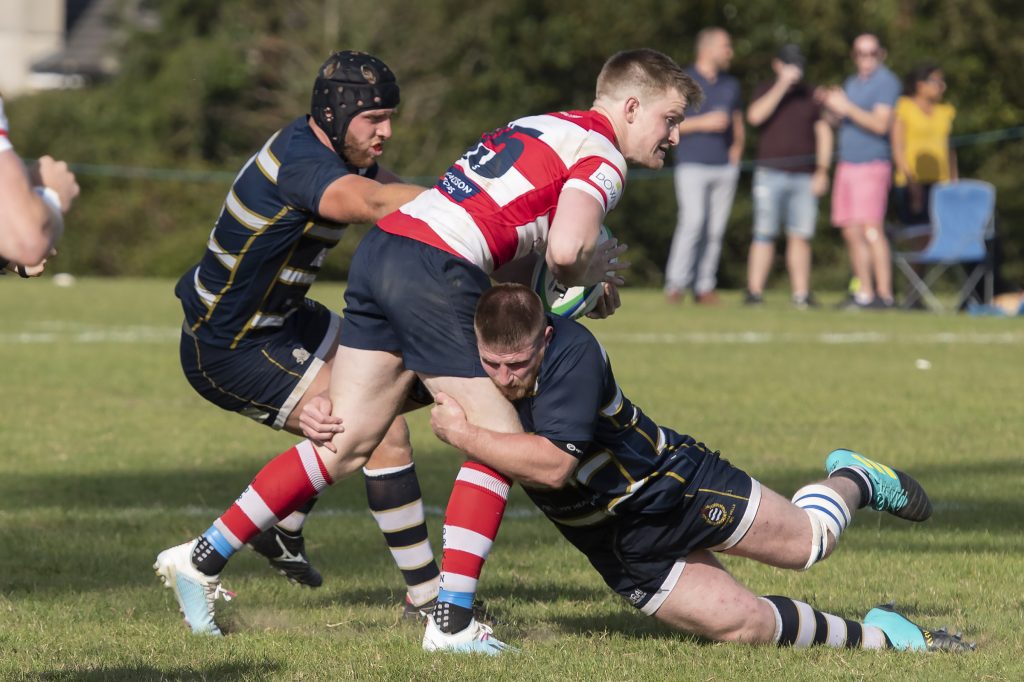 A crowd of nearly 200, bolstered by the players and supporters from an under sevens exhibition match, were eager to see if the home team could build on last week’s promising away win at Guildford.

The squad featured two player changes.  In the front row Luke Hawkins started at hooker meaning that Stuart Nicholls moved to loose head prop and Kamil Wiecaszek moved to tight head. Player-coach Aston Croall then came on to the bench. The other change to the starting 15 was the return of Max Hobbs on the left wing to replace the injured Max Douch and Hobbs was to produce a man of the match performance that thrilled the home support.

Wells kicked off playing up the “hill” and immediately Dorking took control of the ball and launched a series of attacks. This his was very much the feature of the first 20 minutes with the bigger visitors going through phase after phase. An early penalty saw their scrum-half take a quick tap and a series of forward drives looked likely to bring an early score but a fine Mike Hathaway tackle forced a knock on. The Wells scrummage was put under pressure at the first set-piece and were relieved to receive a penalty for Dorking not pushing straight.

Sadly, the Wells set piece struggled for consistency all game, and after a line-out was lost another Dorking attack saw the ball spun wide for right wing Tom Hunt to cross in the corner for an unconverted try on nine minutes. 0–5.

Josh Hawkins was as tenacious in the loose as ever for Wells and he created an opportunity for scrum-half Eddie Croft to make a half-break.  Outside half Frank Reynolds then connected with Hathaway and wing Richard Webster inside the visitors 22. When the ball was switched wide to the left an  overlap was created when Mike Doherty fed hooker Hawkins who drew the final man before popping the scoring pass to Hobbs. This was an excellent team try, which Reynolds converted, and was to prove the shape of things to come with the Wells back-line looking threatening throughout. 7-5 on 15 minutes.

Wells were untidy at the kick off but centre Rich Murray did really well to tidy up the ball. However, it was not long before the visitors were again camped deep in the Wells half and it took grit and determination in defence to hold the visitors at bay. The Dorking scrum appeared to have a significant edge but, again, the home team were able to clear their lines when the visitors were penalised by the excellent and consistent referee.

Unfortunately, the line-out was overthrown allowing Dorking to charge back down the St Marks slope. Hathaway and number eight Nick Doherty combined well to thwart this attack and skipper Ryan Taylor -Dennehy was able to kick the ball clear. After 27 minutes, another strong scrum led to a Dorking penalty which was kicked into Wells territory for an attacking line out. After a flowing movement it looked like wing Rory Mitchell might cross on the right but a valiant last-ditch tackle forced him into touch 5 metres out.

Ben Whale and the Doherty brothers were very much to the fore in defence as the Wells fought manfully to thwart the strong Dorking runners. Taylor-Dennehy made the second of a series of excellent clearance kicks. Soon after Webster, Whale and Hathaway combined to put Wells in a strong attacking position but when the Dorking scrum exerted too much pressure a penalty was again awarded to the visiting team.  Playing down the slope, Dorking would have expected more reward for their possession by this stage and after Reynolds was adjudged to have made a high tackle, they had what looked like being the last first half opportunity to score at an attacking line out.

However, the  home team stole the ball and launched a daring counter-attack from their own 22. Josh Hawkins secured scrappy ball on the ground  before Croft fed the irrepressible Taylor-Dennehy.  He linked with Hobbs and the elusive winger then beat two men prior to passing inside to the ever-supporting Whale. He burst powerfully up-field before passing to Taylor Dennehy who then timed his final pass exquisitely to release Hobbs. He was able to run around under the posts for a superb length of the field try that was a perfect example of the merits of passing before the tackle and staying on your feet to offer a supporting option. With Reynolds’ conversion half-time saw a 14-5 lead on the board.

It it’s fair to say that the score at the interval did not reflect Dorking’s overall dominance but for their sheer effort and tenacity in defence, and exciting “ball in hand“ style, Wells were rewarded with the advantage.

As the second-half kicked off the home supporters will still have been very wary of the threat posed by the visitors. Indeed, they were the first on attack again and after a Josh Hawkins tackle was adjudged to be too high, Dorking outside half Matt Noble kicked a penalty from 35 metres. 14-8 42 minutes.

It was Dorking who were next on the front foot as they showed ambition to exit their own half but the Wells defence held firm, much as it did all day.  Taylor-Dennehy and Hobbs looked like they might connect for Wells but the ball was lost into touch. However, this was to be a temporary respite for the visitors when flanker Chris Brown seized on sloppy play to steal the ball. Nick Doherty saw Hobbs on the left wing and fed the ball to the flyer who superbly beat his opposite man on the outside before sprinting in for his hat-trick try from 35 metres . The conversion slipped wide but Wells had extended the advantage on 47 minutes to 19–8.

Within three minutes lead had been stretched further and the four try bonus point secured. The Wells line out cleverly utilised the front man to secure the ball and the home backs were unleashed again with Webster taking a sumptuous line through the middle to burst clear from 45 metres. He then side-stepped the full back for an excellent, but unconverted, try. 24-8 on 50 minutes.

The game was by no means over though as Dorking regained the kick off and proceeded to camp in the Wells’ half. A huge Dorking scrummage on the Wells feed earned a penalty and whilst the scrum-half‘s initial thrust at the line was halted it was only at the expense of another penalty. This time Dorking sensibly took the scrum option and a powerful eight man drive gave the referee little option but to award a penalty try on 57 minutes. 24–15.

A crucial moment then occurred on the hour. Wells put in a better effort at a scrum and were able to force a turnover at the ensuing ruck. As Hobbs tried to step away he was tackled high by a Dorking forward and he received a yellow card for the offence. Scrum-half Croft was having a positive game and he soon released Josh Hawkins, Whale and Nick Doherty on attacking drives which led to a penalty and and a line-out just 5 metres out. Unfortunately, miscommunication saw the ball lost and Dorking were able to relieve the pressure.

Wells now emptied  the bench with Croall replacing Nicholls, George Montgomery coming on for Murray and Ben Kennard replacing Brown. On 68 minutes Reynolds knocked over a penalty kick from 28 metres following a tackle offence to extend the lead to 27–15.

The changes in the forwards immediately saw a swift switch in scrummage momentum and this platform enabled Wells to see out the rest of the game in relative comfort. Taylor-Dennehy made another 35 metre break but the ball was knocked on as he looked for support. Despite one last phase of Dorking pressure, they could not overcome the bulwark of Wells defenders to force their way through.

A strong scrum and an excellent Montgomery kick gave the home team field position again and Croft was able to use Whale, Nick Doherty and Hathaway, (who had all been willing runners  throughout) to set up another attacking position. When Dorking were penalised at a ruck Reynolds made no mistake with a simple penalty kick on 77 minutes to seal a win at 30-15.

This was another brave and highly spirited performance by Tunbridge Wells to secure their second win of the campaign. All involved will know that they need to take steps to improve the performance of their forward set-piece but, on all evidence to date, if this can be remedied then the exciting back line that is beginning to take shape this season could prove to be a pleasure to watch.

Whilst the First XV were winning the league game, the Tunbridge Wells “Super Twos” hosted their East Grinstead counterparts and turned in a superb performance to run out 64–7 winners. As Wells look to develop an enlarged 1st/2nd XV squad this was a very heartening result #oneTWRFC

Next week (21st September) Wells travel to the south coast to take on promoted Brighton, a fixture that has been played many times over the years and is very rarely anything but a tough day out. Kick off is 3 pm and all travelling support would be greatly appreciated.

Three of the favourites earned back to back bonus point wins. Rochford Hundred beat Hertford 35-7 (to secure their 50th bonus point league win in a row…), Wimbledon won 46-15 at CS Stags and Guernsey defeated Brighton 22-7. Sevenoaks would have entered their home ‘county derby’ against Sidcup with high hopes after an opening weekend away win, but they now know (if they didn’t already) that this league is a tough step up in succumbing to an 8-36 loss. Sidcup sit fourth one place ahead of us on points difference. Finally, London Irish Wild Geese and Tring recorded their first wins of the season with home wins over Guildford (43-19) and Bedford Athletic (43-24) respectively.