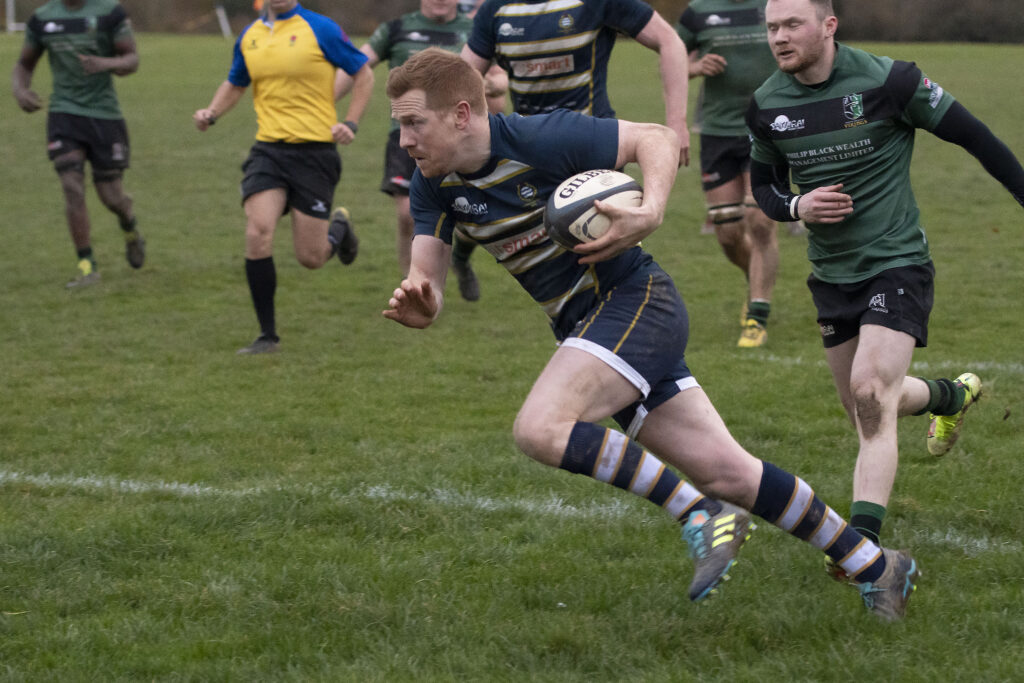 Today was a better day from Tunbridge Wells RFC, whilst ultimately they lost to a competent North Walsham side, they didn’t collapse and wave the white flag, but won the second half convincingly with grit and guile.

With a respectful 2 minute silence observed, Wells received the ball from kick off, with their backs to the club house. Nick Doherty caught the first piece of possession and with a flick, passed onto Luke Giles at 10. The ball was hoisted far and wide and the Green shirted opposition caught it and we then got to see how quick their line was.

They approached the first phase of play with speed and cunning and were awarded a penalty after 3 minutes with one of several Wells infringements to blight the opening exchanges. In fact the penalty count was to be high in favour of the visitors, an unwelcome feature for most of the vocal home crowd in the first half.

They went quickly with this first penalty but Wells were able to thwart the attack. Ball was cleared, a maul ensued which Wells then illegally sacked and again another penalty was gifted. They kicked for their first line out which Wells turned over. Wells get the scrum and then were penalised for collapsing on their ball. Why they would do this was a mystery, however the referee was closer to the play. So called it.

Walsham punted for the line and it looked like they were in a try scoring position landing in the red zone. The lineout was won, and we got to see how silky smooth the Green’s backs were, as they carved through the Wells defence at breakneck speed, their menacing winger, Dan Smith, gliding over to open the scoring. Dotting down in front of the posts, which they easily convert after 10 minutes gone. Score 0-7.

Wells kicked off, traded a few more penalties and hadn’t really had possession, so extremely frustrating all round.

However fortune favours the brave and the second scrum showed Wells dominance, We nicked one against the head, Doherty at 8, picks and goes, Wells get on the front foot, looking like they’re back in business with some soft hands from Tom Pithouse. The ball is somehow turned over and the visitors get to clear with a goal line drop out.

However there was an issue from previous scrum, where the ‘Baby-Faced’ Gabe O’Brien is carried off the park with clearly more damage to his already heavily strapped-up right knee. He was replaced by Spicer from the lukewarm bench who was to have an outstanding game.

Wells then got a line out, the throw not straight, and at this point the Referee decided to have a word with both captains. Clearly frustrations starting to get to both teams.

When Wells have possession, it seems to be from slow ball, so their only option is a dink over the top of the rushing defence, however the ball would then allow more possession to the Green Shirted Walsham side, who are gathering momentum by the minute.

The next piece of possession is for the visitors. They again ship the ball out wide stretching the defence. Approaching the 22, the Walsham 14 (Dan Smith again!) smashes into the Wells 15, Toby Wallace, and makes it over the line for their second try of the half. The conversion is missed so the score remains at 0-12with 20 minutes gone.

From kick off there are some more scrums and penalties, as the opposition couldn’t handle the pressure, sadly Wells don’t do much with the ball and then it’s spilt. The following scrum is then set. It then wheels round inexplicably like a Catherine wheel on ‘Guy Fawkes’ night. The crowd then drops their collective pints as the penalty is awarded to the visitors.

With more forward momentum, once again the silky smooth Walsham backs penetrate, there is a forward arm wrestle, then the pill spits out, and the Walsham 13, Joe Milligan, dances over the line like Cinderella at the ball.

This is the last try of the half, the Walsham players stay on the turf, and the Well’s warriors are ushered back into the changing room probably for a discussion about snuffing out the oppositions backs, retaining possession and creating some ‘Voodoo Magic’ to get in to the head of the referee to help reverse the high penalty count!

The second half kicks off at 0-19. The home crowd love this Well’s team and start to get behind them, urging them to keep on believing and plough through this talented Norfolk farming club.

Pressure now from Wells, as they flood into the red zone, the crowed are at fever pitch, from where we were standing the collapse of bodies across the line definitely looked like a try, however the referee was not in the best position to award it. The following scrum was then lost by Wells, cleared by Walsham and returned with interest. Wells were then awarded a penalty in the red zone as the opposition were under pressure.

This was then converted by GIles, the score now 3-19.

With their tails up, Wells were challenging, and a purple patch of possession was looking positive for Wells.

Something was clicking, and the Wells were on the charge, threatening down the left wing, with space at a premium, Spicer threaded through a grubber kick, which rolled at pace towards the opposition captain and No.8, Will Hodgson, at which point he scooped the ball up one handed and sprinted out of his 22. He was a constant threat and clearly a special talent. Rumour in the bar was he’s rejected a call up to Leicester Tigers.

We are now heading towards the last 25 minutes of the match. The light is fading, and Wells are starting to adopt some quality interplay passing. Wells then receive a penalty, for a high shot, from the under pressure Greens. Wells win the line out from the penalty. A high ball goes up and the Greens knock on. The crowd smell blood, the players dig in.

Wells get turned over in the midfield and the menacing Walsham 8 scampers off down the field. With the tables turned, Walsham now apply more pressure but the Wells line stays firm. Eventually they get awarded a penalty for their defensive endeavours.

With the penalty not clearing the pitch the Walsham boys once again rush through the Wells defence and pull further away with a wide passage of play. Try time. The conversion is easily slotted as is in front of the posts, and with 10 minutes left, the score is now 3-26

With the game winding down, the Walsham number 8 had some more hulking runs, however what will ultimately define the Wells performance was thier last passage of meaningful play.

Chris Shorter made a bullocking charge up the left hand short side and then in mid tackle, offloaded with a ‘Sonny-Bill Williams, out of the back of the hand’ pass to Richard Murray, who placed the ball down with ease. With the score now at 8 – 26. This soon became 10-26 with the conversion by Jack Anderson.

And this was to be the final score. Even in the dying minutes Wells saw more pressure, tackle after tackle, hit after hit. They defended well. And finished the half at 10-7. They can easily compete at this level. They just need some more support. Maybe we can all cheer them on at the next home game – 4thDecember at St Marks vs Wimbledon. See you there!

Have a great game Elliot!

Tomorrow sees our 1s back in league action against @stags1863. Away fixture with a 2pm k.o.

Hope to see you there!