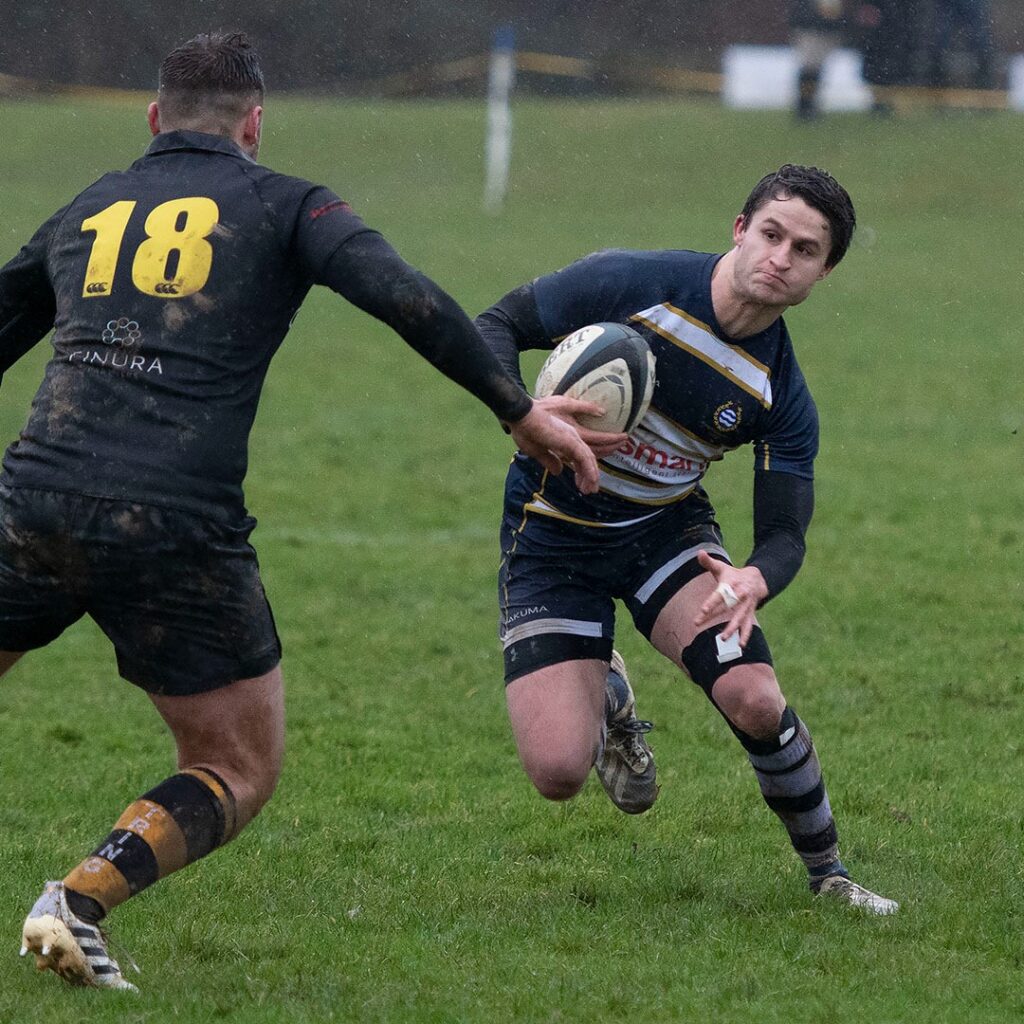 Despite a 4 week gap from their last game Wells had to look carefully at squad selection with James Mckeown making his debut for the injured Gabriel O’Brien, with Tom West returning at Scrum Half for Chas Rigby and Dillon Robertson starting at centre along with Ben Day on the bench.

The first 20 minutes of the game saw the conditions win over the continuity of the Rugby with Tring enjoying the Lions share of possession and territory as Wells found themselves penalised seven times by referee Simon Waite predominantly for not staying on their feet at the clear out. Wells start was not helped when debutant McKeown left the field after 2 minutes with a potential hamstring injury with Tom Pithouse moving to prop from second row the Wells scrum was disrupted from the start.

After a sequence of attacks in the 22 the  Wells  defence finally gave way on 12 minutes as Tring fly half Will Mitchell beat the cover with some smart footwork to score a try close to the posts and convert his own score 0-7.

Wells were not without their own opportunities as the referee penalised Tring as well in the difficult conditions giving fly half Jack Anderson chances from the kicking tee one of which was underhit on 14 minutes. Wells, however, as has often been the case this season began to enjoy a greater share of the ball in the second quarter with Stuart Nicholls on for hooker Luke Hawkins who replaced Pithouse in the second row. Wells produced a sustained attack on thirty minutes picking and driving to the Tring line where a combination of the visitors defence and the conditions thwarted the home side after a sequence of pick and drives culminated in a knock on within a meter of the try line.

Finally on  33 minutes Anderson scored a well struck penalty to peg the score back to 3-7 as the home side through pure doggedness in the loose and the tackle started to enjoy more ball and territory. This was despite losing Pithouse to a yellow card and unopposed scrums being introduced. With a return to 15 men as the half came to an end Wells were able through Anderson to score from another well struck penalty to bring the score to 6-7 at halftime.

The first half had been played in torrential rain and squally winds and the rain continued but at not quite at the intensity of the first half as the brave crowd of just over 100 waited to see if Wells could play against the elements.

Both sides defences won the day for much of the second period despite both sides suffering disruption with  Tring tight head Nick Brown being yellow carded on 57 minutes and unopposed scrums being reintroduced and then became a permanent feature as Wells’s Pithouse was injured and there were no more front row replacements. Both sides then went down to 14 after a fracas -with the home side close to scoring- which saw Tring’s Josh White and Wells’ Tom West both yellow carded in the last 10 minutes of the game with Ben Day taking over as the Wells scrum half.

The second half remained scoreless despite a high standard of handling in the conditions by both sides. It took until the 77th minute for the deadlock to be broken as Wells conceded three quick penalties in a row  the last of which put Mitchell in kicking range as he kicked a simple penalty for a 6-10 lead.

With the last minute of normal time on the clock Tring kicked along the floor for centre Ted Stanford to get the referees nod on the touch down despite a desperately close call.and Mitchell converted to give Tring a 6-17 lead.

Wells were not finished, however and with the rain finally ending produced some excellent handling as the ball was moved across the pitch and finally to skipper Mike Doherty who despite conditions underfoot did enough to get over for the try close to the left touchline with Ben Day producing a very good conversion on 87 minutes to bring the final score to 13-17 and to earn a losing bonus point.

After the first 20 minutes this was a brave performance in poor conditions for Wells with the whole team putting in a fine defensive shift and handling a large amount of disruption in the pack through injury and yellow cards. Wells are very close to producing the form to produce more wins in the second half of the season having already amassed 5 losing bonus points. This game could have gone either way as the Tring try at the end of the game was a desperately close call. The sort of call that if you are winning regularly will go your way. DOR Simon Jervis and coaches Ben Kayser and Dave Strettle will work on a hopefully fuller squad before Wells visit Brighton this Saturday KO 2 00pm.