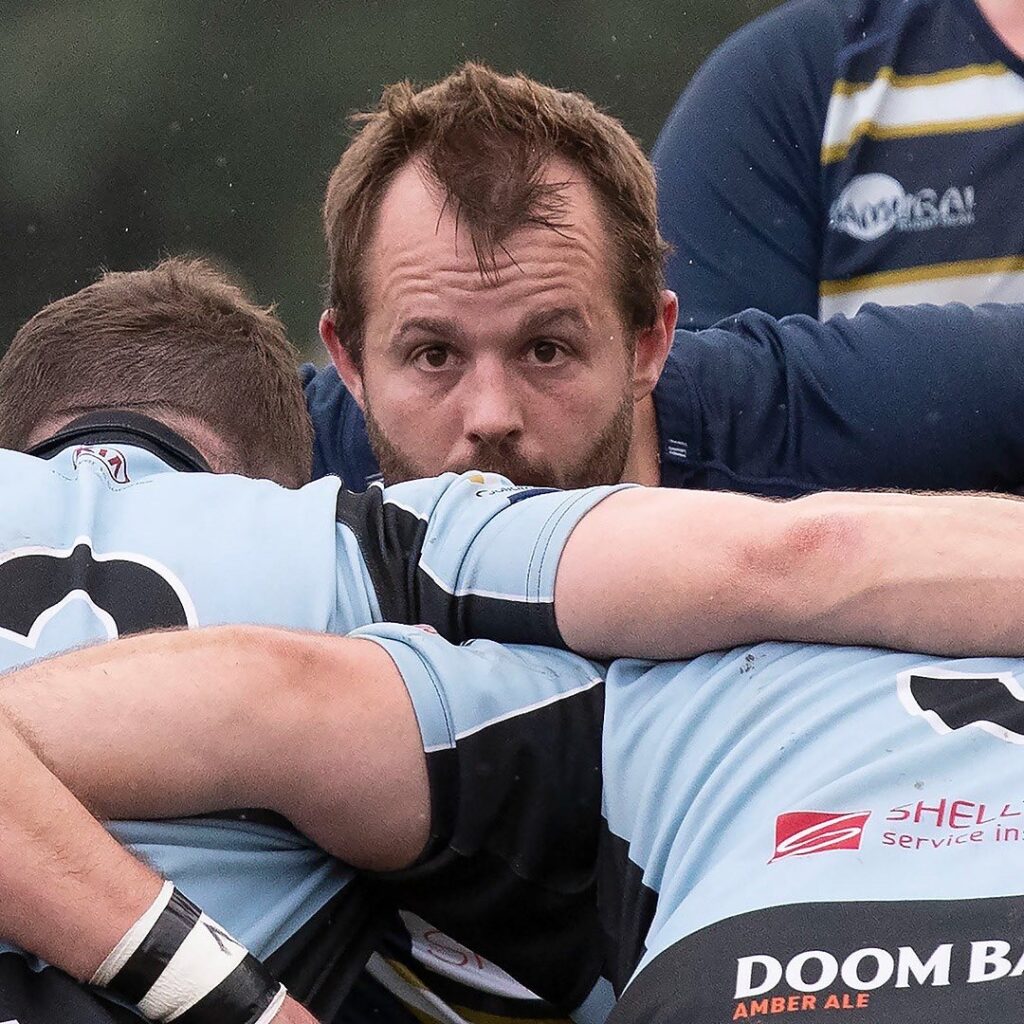 Despite a week’s rest across the London and SE Premier league Wells still found themselves with 9 squad members on the injured list and so had to dig deep for selection. Luke Giles started at fly half, Josh Hawkins came into the second row, Tom Pithouse was added to  the bench to bolster the forwards along with Richard Webster who provided cover for the back row despite normally plying his trade on the wing. The crowd was a good one of close to 200 and all anticipated- given past results- a relatively close game.

S and E were quickest off the blocks and applied pressure and back penetration in the first 10 mins playing down the hill, eventually taking advantage after several phases of play to score ‘round the corner’  through right wing Brad Meeson with full back Sam Hurley adding the extras 0-7 (10 minutes).

From this point onwards in the first half Wells produced some of their best play of the new season suggesting that the side could settle down and work as a unit. Luke Giles took advantage of better territory in the S and E half to nail a low hit penalty on 13 mins to peg the score back to 3-7. At this stage the Wells pack benefitting from some hard set scrum sessions with coach Ben Kayser established  ascendancy through props Charley Smith and Gabriel O’Brien and hooker Stuart Nicholls earning a number of penalties as S and E were driven backwards or stood up in the front row. A succession of these penalties finally causing the referee to lose patience on 23 minutes when he awarded the home side a penalty try as S and E again tried illegally to counter their inexorable march backwards 10-7.

Wells continued to take advantage of the solid platform in the scrum and clean line out ball to continue to pressure S and E on or in their 22. A succession of sweeping handling moves getting the home side to within 15 metres of the line. Fly half Luke Giles then making an astute inside break to pass to Toby Wallace  who cut a great line across the grain to score under the posts with Giles converting for a 17-7 lead on 29 minutes.

The rest of the half saw Wells still dominant in territory but one or two passes went astray and a couple of kickable penalties were turned down in order to kick to the corner where possession was lost at the ensuing line out. Nevertheless with the score remaining 17-7 at half time and with the downhill slope in the second half the home crowd was happy.

Sadly despite such a good first 40 minutes the first 10 minutes of the second half saw Wells forced back into their own 22 and then centre Ali Main was given a yellow card for an offence in the loose on 51 minutes. As is often the case the S and E side saw encouragement and within 2 minutes of Main’s departure No 8 Matt Whitaker forced his way over with Hurley again adding the points 17-14. Despite the home side finding it difficult to duplicate the scrum dominance and line out accuracy of the first half and losing some possession in the tackle they did manage to force their way into the S and E half and on 57 mins Giles slotted his second penalty to give Wells a 20-14 lead. The last 20 minutes then assumed an air of inevitability to it as with no bench replacements the props had to play out 80 minutes and an injury in the backs caused a reshuffle with Giles going to full back and Jack Anderson assuming the fly half duties. Persistent pressure from the visitors made it difficult for Wells to relieve pressure in their 22 and when they did have the ball often tried to run it laterally out of their half. Ultimately with a tiring pack and a confident S and E side battering the line something had to give in the Wells defence and on 73 minutes after a succession of pick and goes sub Ross Parsons scored halfway out on the right and Hurley made no mistake with the conversion 20-21.

Despite Wells trying desperately to relieve the stranglehold full time came with them still trying to get out of their 22 and at the wrong end of the field to affect the final score.

This was one of the best first half performances by the Wells this season but a little inexperience in a young side, a yellow card  and a tiring front five meant they couldn’t hold out for what at halftime looked a well- managed winning game. Credit to Sutton and Epsom who put in a spirited second half and prevented Wells from a couple of potential scores in the first half which would have let the home side run away with the game. A losing bonus point was little consolation but as this squad gets used to playing with each other and some of the injured return they will surprise one or two sides at this level as they look to rebuild over the next two seasons.