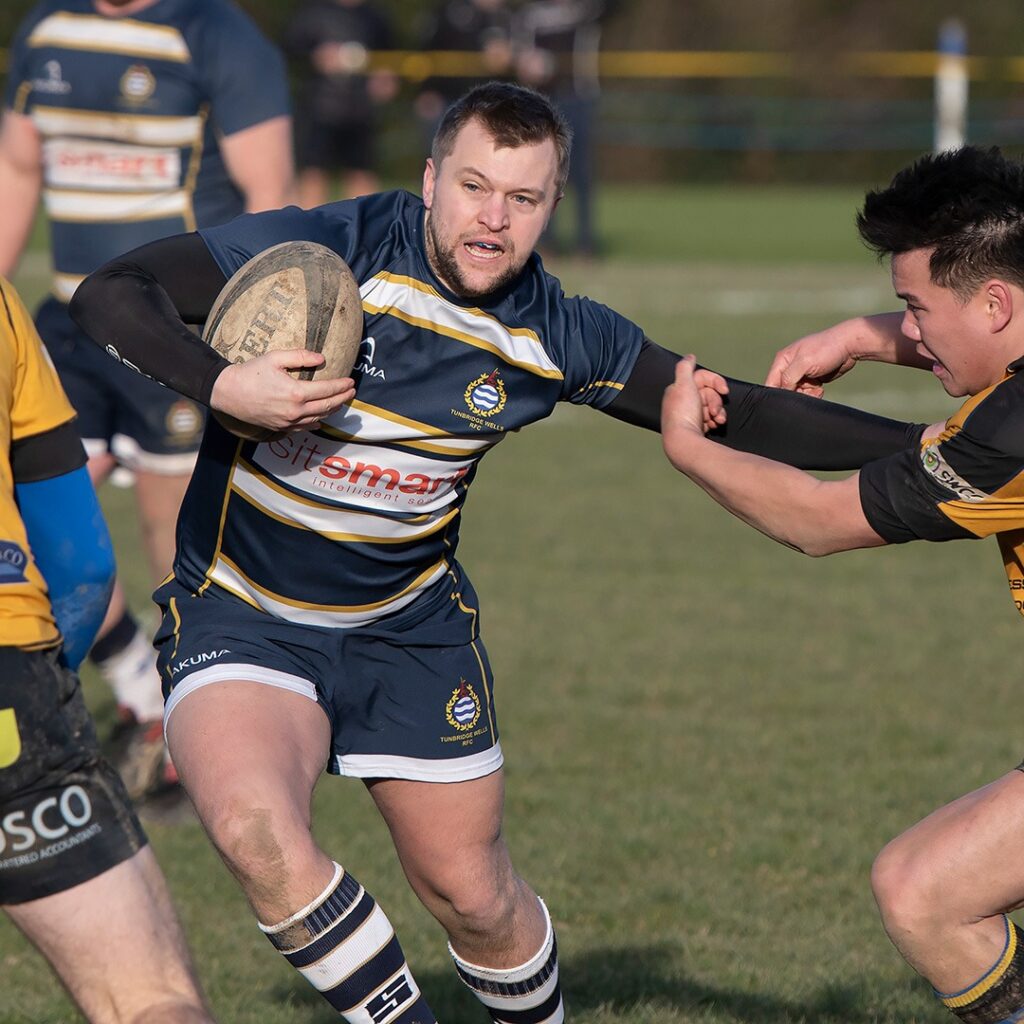 Tunbridge Wells welcomed table topping Hertford on a bright crisp Saturday to St Marks. Since the early season encounter, which Hertford won 17-8, the two sides have had very different seasons. Hertford came to St Marks looking to continue their 13 match winning streak and secure five points to maintain their top spot. Wells were looking to build on another strong performance the week before, where unfortunately they came away without the deserved win.

Despite a number of changes to the opposition team, the Wells injury list continued to hamper the home side, with 12 first team squad players unavailable this week. Wells started positively, winning a penalty and kicking for the corner. A sharp first line out and driving maul led to James McKeown crashing over the line for the first try. Jack Anderson added the extras, giving Wells a 7-0 lead in the opening minutes – for the first time this season, it was Hertford starting slowly in the early encounters, rather than Wells. Unfortunately Well’s injury list was added to in the first two minutes, with McKeown departing with a hamstring injury. Cameron Follows came into the back row, with Charley Smith moving to loosehead.

Wells continued to put pressure on the Hertford team, nullifying their big ball carriers with a strong defensive effort. This continued pressure was rewarded, with Anderson, who had a good performance from the boot all game, adding a further three points, extending the lead to 10.

Wells continued to pressure the Hertford defensive line, with a series of strong carries and attacking play. This again led to a further infringement, with Anderson adding the three, to give Wells a 13 point lead at half time.

Wells and the home supporters were expecting the league leaders to come back with some fight in the second half and the opening score was almost certain to be key. The early encounters carried on the physicality of the first half and a rare penalty in the Wells half gave the visitors the first opportunity to add to the scoreboard, which they duly did – 13-3.

However the home side, buoyed by the strong home crowd, continued to assert attacking pressure which was rewarded with another penalty within the range of Anderson, who duly stepped up and put the lead back to 13 points.

The home crowd did not have to wait long for an additional score, with the first try of the second half coming from a rampaging run from the home favourite Nick Doherty, with an offload to Finn White, who was able to dot down under the posts. Anderson added the extras to extend the lead – 23-3.

Hertford began to build the pressure from here with their big ball carriers making inroads into the strong defensive set of the Wells. The Wells defensive line eventually succumbing to concede from a cross field kick – 23-10.

Hertford continued to carry strongly as the game moved into the final quarter, with the Wells crowd hoping the home side could buck this season’s trend and hold out for the win. A period of pressure in the Wells 22 resulted in a knock on, giving the home team a chance to clear their lines. However the kick was gathered by the opposition, who span the ball wide to score in the corner. 23-15.

Hertford’s dogged reserve began to show but the physicality of the game was taking its toll on both teams, with the benches emptied and injuries mounting.

With the clock ticking down into what surely was the final few minutes, the defensive line of Wells was broken again with Hertford scoring in the corner. In a rather bizarre move, Hertford declined the kick, opting to maximise the final mins. 23-20.

From the resulting kick off Wells continued to pressure Hertford – a series of scrums followed in the ensuing minutes – Hertford scrum, Wells scrum, Hertford scrum – all in the Hertford 22.

A turnover to Wells allowed them to wind down the last few seconds on the clock, before putting the ball out to earn the win.

A superb defensive effort from 1-15 for Wells sealed the victory, giving the players a much deserved home win and something for the supporters to truly enjoy.

This Saturday, Wells make the short journey to second place Sevenoaks for the second part of this season’s A21 derby. All support welcome!