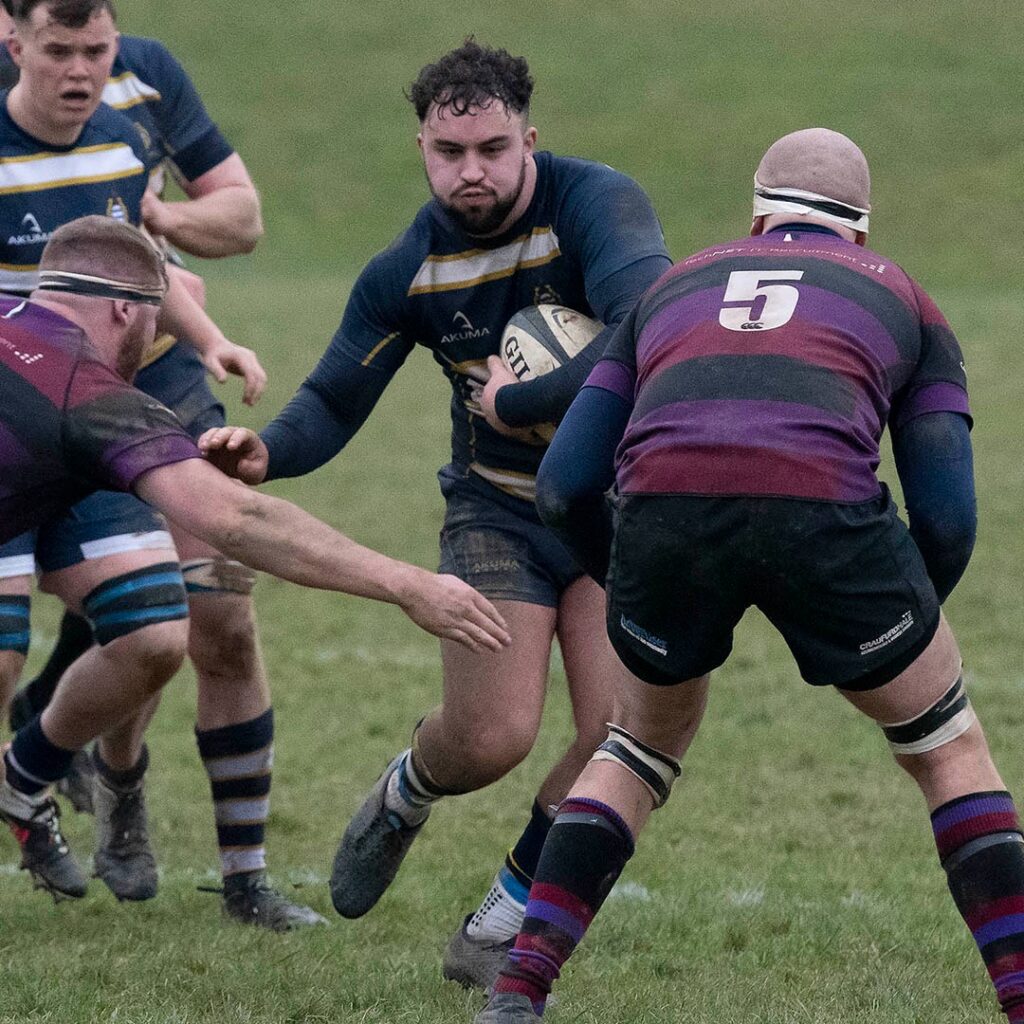 With fine, brisk conditions, Wells decided to play on the 2nd XV pitch. It was in good shape and gave the throng of 300 plus crowd a hill top vista in which to survey the grassy battle pitch.

Wells were hoping to repeat some winning ways from the previous weeks’ tight match away win at Brighton.

Both sides slightly unrecognisable from their earlier season close encounter. Wells suffering from a ’25 player’ injury list and the opposition looking like they have benefited from some in-season recruitment.

In addition, Wells capped a new Hooker, Cameron Follows, who played a full 80 minutes and should be commended for his excellent debut.

Maidenhead with a spring in their step pinned Wells down early on, in their 22 and from the get go put some swift points on the board. A touch down from the opposition no.10, with the conversion, Maidenhead quickly went seven nil up.

From the restart, play pings back and forth, however a high kick from Wells into the Maidenhead 22 gets knocked on, with the player under no real pressure.

This gave Wells a chance to get back and the resulting scrum creates a penalty for Wells. After some injury treatment, the silky Scot, Jack Anderson, slots the 3 points to make it 3-7.

With tails up and sustained pressure from Wells, back in the opponents 22, the opposition came off their feet and rightly get penalised. Another chance for a shot and Anderson picks up his penalty brace. Score now 6-7.

The next passage of play sees both teams trying to establish a foothold. Maidenhead collapse a scrum and the Wells get on the front foot.

With mounting dominance after 20 minutes gone, a kick for the touch turns up the heat. Sadly the pressure didn’t turn into points and Maidenhead get to clear their lines.

The play transfers into the home sides half and with Wells not rolling away after a tackle the ensuing penalty is neatly slotted and Maidenhead creep ahead. 6-10.

The next passage of play is quite stop start, Maidenhead’s line out is functioning well, however possessions seems to be swapping backwards and forwards.

But with 35 minutes gone, the visitors decide to kick for the line and again with heavy pressure on the Wells 22 they look like they will score. The line is caught, the maul is made and the Maidenhead hooker dots down. The 5 points get converted with an excellent kick form their full back, Conner Grainey. Score now 6-17.

Wells now retaliate, a ‘not straight’ from the usually reliable opposition hooker gives Wells a good scrum time chance. Wells attack, butcher their move as the ball goes wide, but receive a penalty back for a high shot on Anderson’s throat. He hits between the sticks. Score is now 9-17.

And the 1st half closes.

Last week, it was rumoured that Simon Jervis’  (the new evergreen Director of Rugby at TWRFC) Churchillian half time chat helped the Wells turn the tables with positive prose. Would his sage words this week provide another repeat of a Wells tide turning? We all hoped so.

Clearly he would have tried to address challenges around Wells being unable to create their own chances and help guide the team against high-pressure tactics from the magically lightning quick opposition in their defensive line.

With a shrill blast, the game kicked off. Maidenhead start the second half with applied pressure and score under the posts with a smart, quick, right to left passage of play. Score now 9-24. Not the start Wells wanted.

So Wells return with enlightened pressure. So much so, the opposition 4 gets his 10-minute marching orders for repeated infringement. The pen is kicked out for a lineout, which Wells fail to catch. And Maidenhead select a scrum.

Again Wells attack with a now dominant Scrum, and from an ensuing penalty, tap and go. But still lack the penetration to cross into the try zone.

Well’s receive another penalty in front of the posts but too far back to slot. Line out is selected, then scrum followed by more repeated infringements. The crowed pleading for more cards from the consistent referee. This is when Wells need to capitalise. Unfortunately they don’t. Maidenhead are off the hook, as they clear their lines.

Maidenhead then trundle down to the Wells half. Then to rub salt into already open wounds, the opposition break with a bullocking run, by the meaty loose head. Ball is spun out, after he eventually gets taken down, but the damage is done. Score now 9-31, still with 20 minutes left to play.

Arguably now a difficult score line to come back from with the lack of penetration from Wells and the dominance from the Maidenhead side, now very much with their heads up. And to further beleaguer the home side, Chris Shorter comes off with a shoulder injury.

Maidenhead now in their stride, give the ball to their talented 14 Scott Prince, the king of the wing, with light feet and swivel hips, he menaces the defense and flicks a pass to the Maidenhead Captain, Ben Mitchell. Score now 9-38.

With 5 minutes left to play, Maidenhead now bully their way down the field from kick off and with strong running from one of their big lads, Alex ‘Frenchie’ French, ploughs through three tackles and again seals the fate of the startled Tunbridge Wells side. Score line 9-45

Maidenhead fully deserved the win, however with more possession and some penetration, Wells really aren’t too far behind. But when they return the pressure, they have to convert it into points.