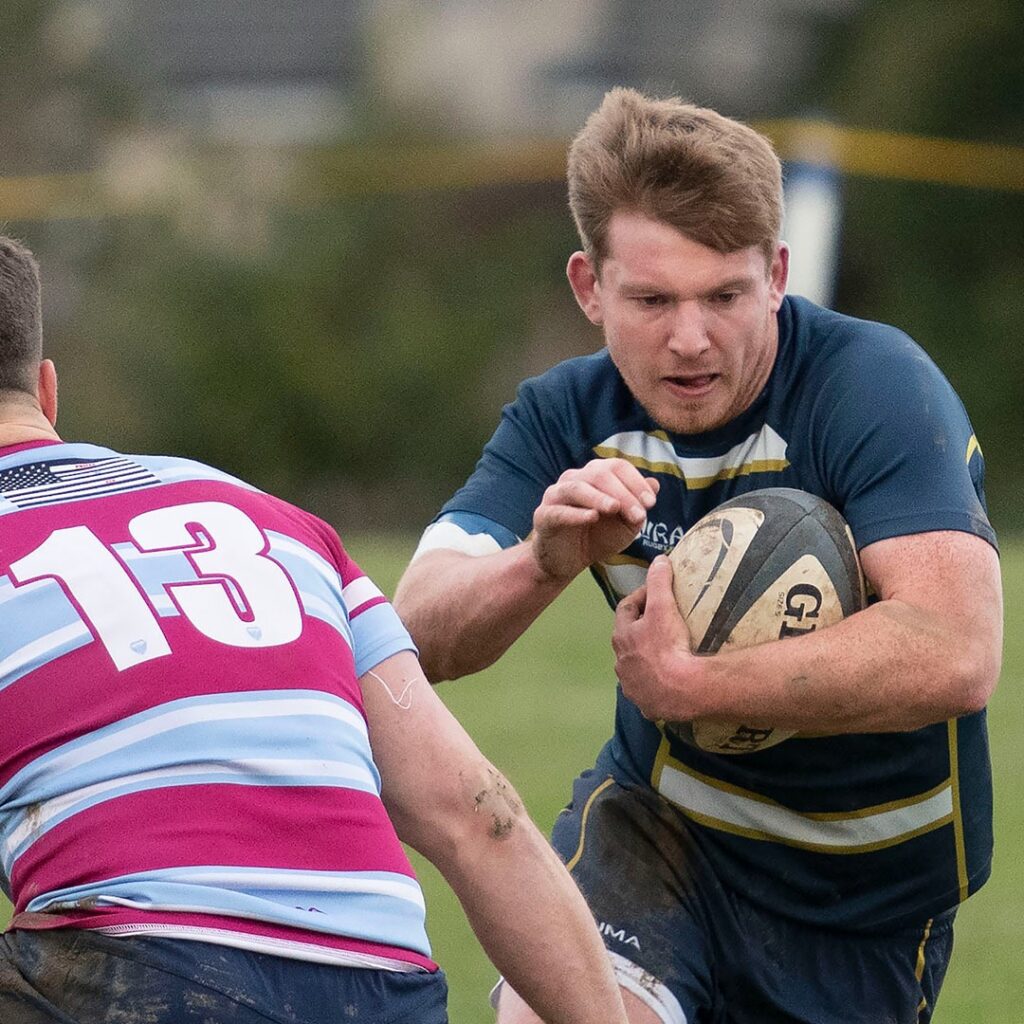 As the league enters December we were met at St Marks by perfect rugby conditions. The ground was soft, the sky was blue and the air was crisp. As Tunbridge Wells kicked off the first half the home side were feeling far more positive following last week’s win away at CS Stags. The only changes to the Tunbridge Wells team were forced changes due to yet more injuries the previous week. However, it was great to see Duncan Hales back in a Blue and White shirt and his obvious 6 foot seven of threat in the line out.

Early exchanges saw the home side looking slightly stronger. In the scrum TWRFC won the first three, also winning two penalties and looking the more expansive side. The front row of Chris Shorter, Luke Hawkins and Gabe O’Brien were in complete control of the scrum and the row of Tom Pithouse/Duncan Hales were delivering the necessary power. The Scrum was going to be a useful tool for TWRFC.

With only four minutes on the clock TWRFC choose to have a kick at posts which Jack Anderson pulled wide. But after some strong continued pressure and 12 minutes on the clock Wimbledon let their discipline fall as their tight head prop was red carded for serious foul play off the ball. This was to further weaken their scrum which proved costly when Wimbledon lost their own scrum on their 5m line and TWRFC pushed them back over the try line for Nick Doherty to score.

Wells tails were up and they were turning over scrums, line outs and were taking advantage of the favourable slope, the numerical advantage and a long missed swagger in the step. This confidence saw the backs play the ball through hands from Mike Doherty to Ali Main for Toby Wallace to kick/chase for a very classy try. Jack Anderson converts for a 12-0 score line

The encounter was, to Wimbledon’s surprise, favouring the home team and this was leading to further indiscipline as The Dons sought to disrupt the Wells. Some more off the ball excitement saw some ‘hand bags’ in the Wimbledon half. It seemed to coincide with the arrival onto the pitch of Stuart Nicholls who was replacing the injured Luke Hawkins. The resulting scrum saw yet another penalty awarded to The Wells and Jack Anderson slotted the kick for a 15-0 lead at half time. The crowd were enjoying what they saw.

Everyone knew Wimbledon would come back strong in the second half and that they certainly did. The Wells scrum remained dominant, the Wells line out was reliable on their own ball and with Wells lifting up Duncan Hales in the line out Wimbledon were struggling to hit their man. But the midfield was where Wimbledon were targeting their attacking game. The Dons were enjoying good possession and the penalty count was starting to favour the visitors. On 56 mins the Wells defence leaked for the first time as a strong powerful run from the opposition centres came straight through the line 15-5. The game was turning and Wimbledon’s game plan was working.

Injuries were mounting and the structure of the game was breaking down. With injuries to Mike Doherty and a yellow card for Toby Wallace Wimbledon were finding gaps and on 76 mins and 77 mins Wimbledon found tries to take the score to 15-19.

But testament to the Wells spirit they came back with added fire in the bellies and were immediately on the attack. This resulted in another yellow for Wimbledon’s other prop. At which point the ref and the Wimbledon coach entered a very lengthy mothers’ meeting about their decision to go uncontested scrum and remove the wells threat.  After what seemed like an age Wimbledon then went down to 12 men. We were in for an exciting finish! Wells were in complete control but could not make the line. The Dons defended with determination and with the help of the refs decisions managed to see the game out for a very lucky win. Tunbridge Wells will be heartened by playing some fantastic rugby in the first half and being ever so close to taking the points. They are building together as a squad and looking stronger and stronger.

Next week Tunbridge Wells head to Havant for a long old road trip.