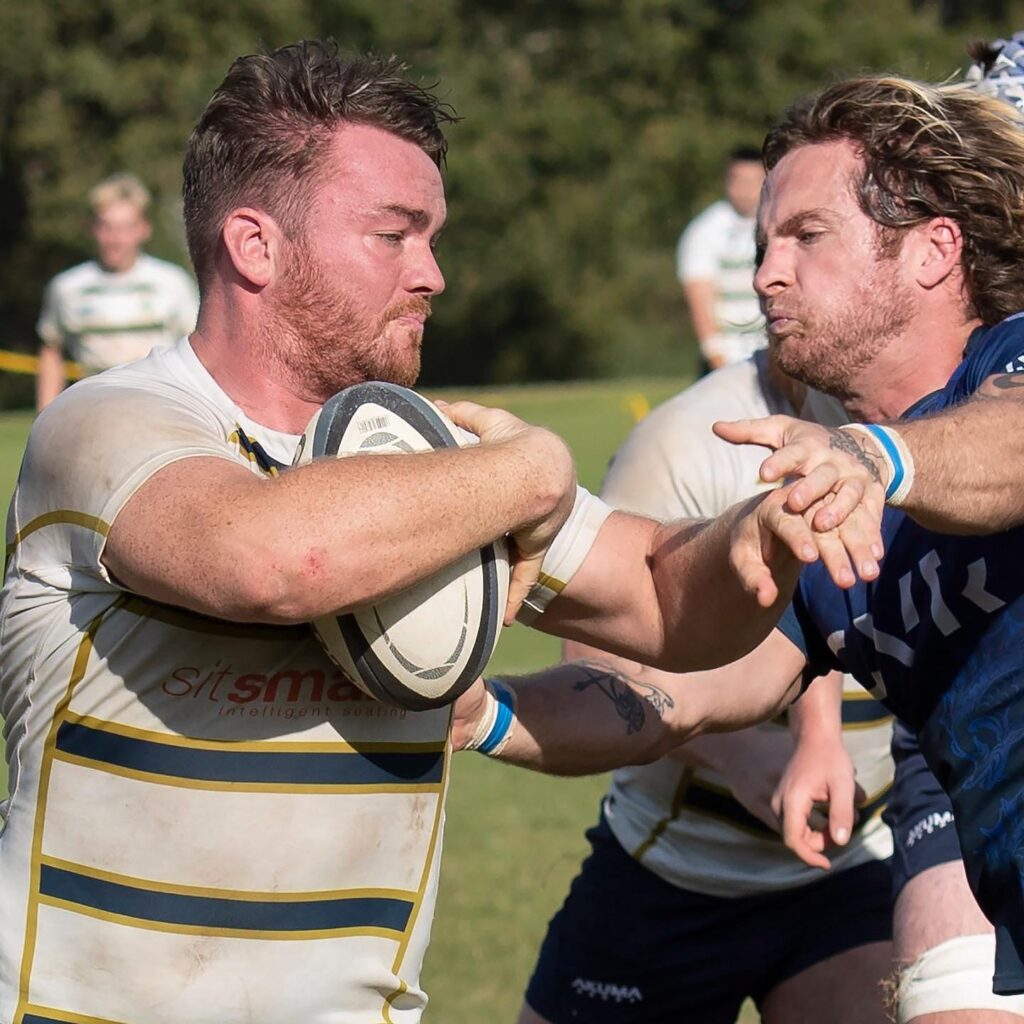 The 2nd XV had an early 2pm k.o. against Medway coming out with a solid 33-17 win. The home support moved across to the 1st XV pitch at full time making for a packed sideline.

Brighton started well, playing towards the clubhouse, scoring after just 2 minutes.  It didn’t take Tunbridge Wells too long to get onto the scoreboard though.  From the first scrum of the match it was clear that Wells would be dominant in this area of the field with a 10m shove.  Number 8, Nick Doherty took the ball off the back and made a run.  As it looked like he was running into traffic he dinked a grubber kick through into space, chased by Charlie Rigby and Finlay White.  Charlie was first there, but with no time to pick it up, kicked it through into the in-goal area and Finlay White was right behind it ready to claim the first Wells try of the afternoon.  Five minutes later Brighton were on the score sheet once again 5-14.  On the 24 minute mark Brighton were on the attack again and well into our half, but they spilled the ball in the tackle and fullback Toby Wallace was right there.  He made significant ground showing exceptional pace, offloading to Finlay White who took it the rest of the way for his second try of the afternoon. Brighton had one more first half try in them with a 5m lineout, maul and over as well as one penalty kick, before winger Jack Smith went over for Wells just before half time taking the score to 19-24.

We started the second half brightly with a well-crafted try initiated by Luke Giles who made a break, feeding to Josh Brockman, and on to Charlie Rigby who made no mistake 24-24.  The second half was fairly evenly matched, but with no further score for Wells.  Final points of the match were in the 60th minute from Brighton, with Wells pressuring a number of times as the final quarter progressed but play breaking down without managing to cross the try line.

Chaz Spence, former Captain of Tunbridge Wells RFC, now Interim DoR of the 1st XV remains incredibly positive and excited, despite a couple of losses to start the season.

“We are a brand new side this year, in terms of coaches and players. It’s going to take time for these combinations to gel and for the coaches to really stamp their style onto the team. Thankfully we have world class coaches and an incredibly enthusiastic young squad that are willing to learn and work hard, so we remain in a good place.

On Saturday we were guilty of playing too much in our own half, we got a bit excited with a few line breaks early on and then wanted to play from everywhere. As coaches we want to play a quick expansive style of rugby, but there needs to be an aspect of control along with it and playing in the right areas of the pitch. Despite this, we had several chances to win the game at the weekend and it was the final pass that let us down, so although it goes down as a loss there were more positives than negatives to take from the game.

Next week its battle of the international coaches, with Benjamin Kayser and David Strettle’s Tunbridge Wells going up against Will Greenwood’s Maidenhead. The game is away with a 2.30pm kick off.”