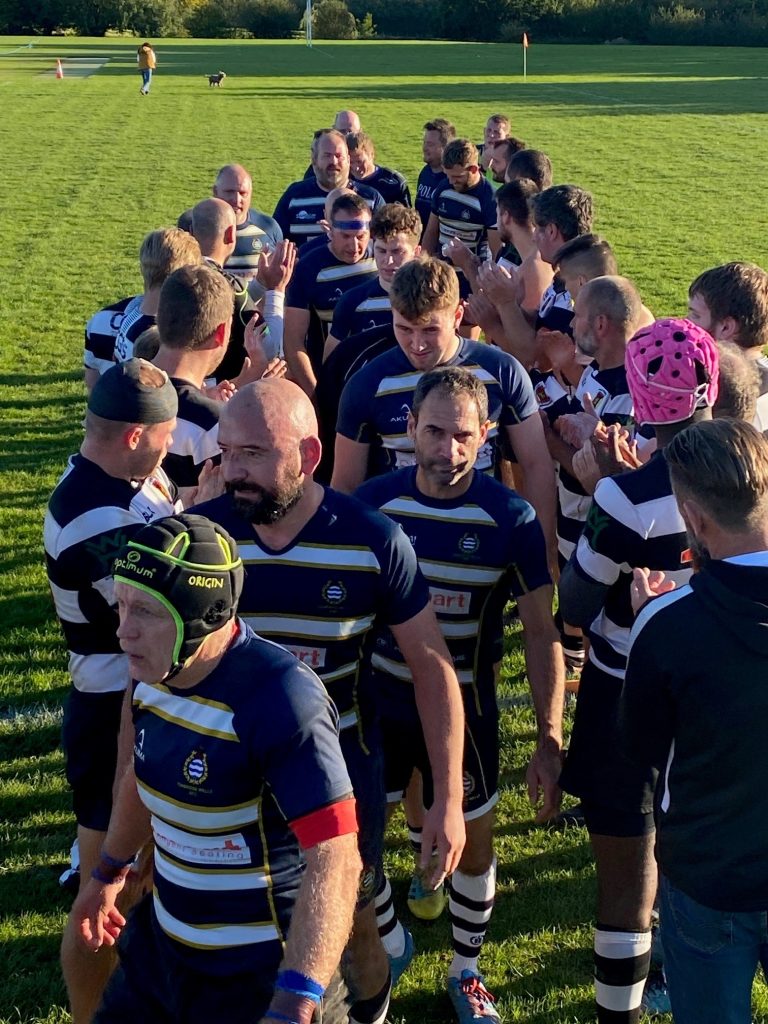 The kick off was 10 mins late due to traffic congestion but from the off Wells looked to attack and after a few knock ons from both sides Wells Stu Nicholls on his return from injury went over for the first try unconverted for a 5-0 lead. From the returning kick off Cam Follows took a great catch and charge upfield he linked with his team mates before Harvey Colangelo sent prop John Owusu over with Ollie crees converting for a 12 – 0 lead. Wells had found their flow and with Gs wayward with their kicking from hand Wells capitalised, this time Colangelo playing at 10 linked with Crees, a combination not seen for many a year at St Marks as their dads looked on proudly from the touchline! Ollie scored and converted for a 19-0 lead after 20 mins. Wells were starting to gel with some impressive running from Alex Nicholls in his first senior game after uni and Ollie Crees always strong with ball in hand and Robbie Hendley making a welcome return to the Club showed glimpses of his silky running. The pack were impressive with some charging runs and offloads and new young 9 Sam Seymour fed from the base well. The future looks bright for our 3s!

It was Cam Follows next on the scoresheet with some great support play to touch down – 24-0. The next 15 mins Gs turned things around with some aggressive tackling and testing runs stopping the Wells flow and the scoreboard in turn. A blood injury to the returning Josh Hawkins saw him leave the field to be taped up and it wasn’t until the last play of the half that Simon Waymont showing immense strength got over in the corner for a 29-0 half time lead.

The impressive Follows opened the half with an early try converted by Crees for a 36-0 lead and shortly after a well worked try that saw several phases eventually was dotted down by Colangelo with Crees converting again – 43-0. Gs never gave up coming close on many occasions but not quite getting the reward they deserved as Wells cleared their lines. It wasn’t until the last few minutes that Wells hit the scoreboard again. First Ollie Crees went over then Alex Nicholls got a deserved try chasing Hendleys kick to the corner. At 53-0 the game was won but Gs found the inner strength to march upfield and with Wells giving away a succession of penalties Gs took advantage and went over for what was a deserved try.

A great game, well refereed in a good spirit with a supportive crowd. A good day all round and skipper Andrew Cunningham left the field with a smile on his face and always good to see the effervescent Andy Maynard trotting out for another season