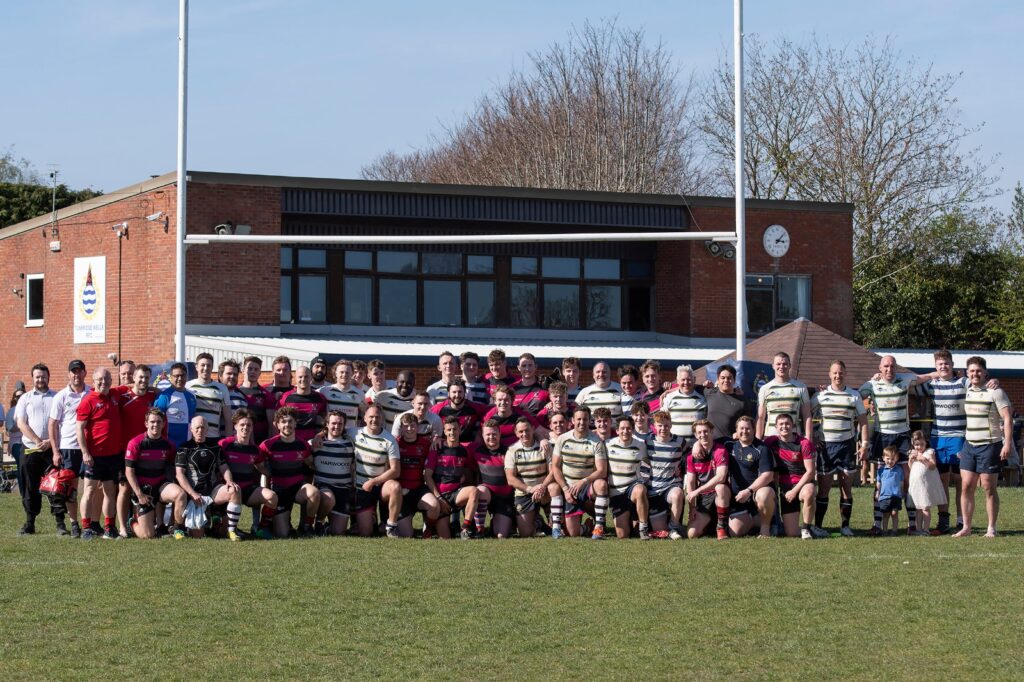 A beautiful sunny Easter Saturday saw the re-arranged Boxing Day fixture between Tunbridge Wells All Stars, made up of a mix of players young and old and special guests from other clubs, and Old Skinners’, made up of past players from The Skinners’ School.

Referee Martin Croker blew his whistle and we were off in front of a large crowd of around 150. For anyone expecting to see a fun social game the first 5 minutes showed that this was going to be fiercely competitive as tackles came crunching in from early on foiling attacks on both sides. With Old Skinners’ wing Tom Lane and George Gomersall putting in some big hits early on, as did Tom Petty and Tom Bagwell for the All Stars. The deadlock was broken after 7 minutes when Max McCabe was in support to take the final pass to run in under the posts, converted by Isaac Jones for a 0-7 lead to Old Skinners’.

What followed was 10 minutes of attacks on both sides foiled by good defence and a few mistakes. Just before the 20 minute mark Alex Maynard found some space and a turn of pace not seen since his Twickenham appearance in 2016, and he touched down in the corner for to reduce the deficit to 5-7.

With the sun pouring down the match was played in 20 minute quarters – The All Stars squad was big so replacements made regularly and a few new faces appeared for the second 20. Old Skinners’ started well and took the points despite the light-hearted boos from the crowd. Isaac Jones increased the lead to 5-10. The All Stars pressed hard but were met with a wall of great defence from the young Skinners’ side. Then following a clear penalty given away by the Veteran Paul Miles, a quick tap was looking certain to be another score for Old Skinners’, but it was Rob Harrison’s side’s turn to put in some defence to stop the scoring opportunity.

Towards the end of the half Old Skinners’ once again took the points and Isaac Jones added another 3 to take the lead to 5 – 13. The half ended as the All Stars ran out of defence and with Old Skinners’ knocking on as the final pass was made. The half time whistle went despite some confused voices in the crowd expecting a more severe punishment for the offence!

All Stars ringed the changes in the 3rd quarter and started well pressing hard for the first 5 minutes but the passes just didn’t fall as Old Skinners’ continued to defend ferociously. Breaking quickly from defence Old Skinners’ found the gap and raced to the line with Finn Holden scoring and adding the conversion. Old Skinners we’re having a purple patch and it was Anthony Storkey who split the defence to score and convert increasing the lead to 5-27. Soon after Jack Palmer got on the scoresheet with a fine swallow dive try converted by Isaac Jones as the 3rd quarter ended 5 – 34.

The All Stars made some final changes again for the final quarter and again started well. Prop John Owuso stole a ball in midfield and linked with Tom Bagwell to Alex Maynard who set our other Twickenham 2016 winner Charlie Harding away for a well deserved try which he converted to close the gap to 12 – 34.

But it was Old Skinners’ that finished the stronger with the final try to finish a great game as Will Corrie capped a great performance scoring to make the final score 12 – 39. Skipper on the day for Old Skinners’, Matt Humphrey received the winners’ trophy from Tim McCabe and Craig Fleming (Assistant Headmaster at The Skinners’ School). The Man of the Match awards went to Rob Harrison and Conrad Fletcher (who received the Tim McCabe Challenge Cup, jointly) for the All Stars and Old Skinners’ MOMs were Max McCabe and Anthony Storkey.

It was a great day for the town club with some exceptional young talent on show, boding well for the future of rugby in the area.
Next week sees the final TWRFC 1st XV fixture of the season as we welcome Dorking RFC to St. Marks – Sat 23rd April – 3pm k.o.

Come and join us for Touch Rugby at St Marks - every Tuesday from 6:30pm

Great fun, good exercise and you can cool off in the bar afterwards.

Many of you will have heard the sad news that clubman Geoff Casely passed away last week.